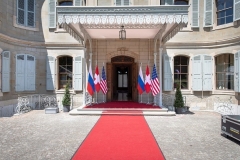 U.S. and Russian flags fly at the Villa La Grange in Geneva, the venue for Wednesday’s Biden-Putin summit. (Photo by Peter Klaunzer/Pool/AFP via Getty Images)

(CNSNews.com) – President Biden’s much-anticipated summit with Russian President Vladimir Putin could go on for four or five hours, but there are no plans for a working meal.

“No breaking of bread,” a senior U.S. administration official briefing told reporters on Air Force One on background as the president flew from Brussels to Geneva for Wednesday’s encounter.

But while no meals are planned, “we’ve agreed with the other side that there will be some flexibility just so that the leaders can make determinations about the best way to conduct their business,” the official said.

Meeting at a historical villa located in a Geneva park, Biden and Putin will first hold talks accompanied only by Secretary of State Antony Blinken and Foreign Minister Sergei Lavrov, plus interpreters.

They will then break out into a bigger session, with about five officials on each side.

Once the summit is over, Biden and Putin are expected to hold separate press conferences, with the Russian president expected to go first, the administration official said.

According to Putin foreign policy advisor Yury Ushakov, no decision has been made on producing a joint statement or on holding a joint press availability.

As for the possibility of one-on-one talks, the TASS news agency quoted Ushakov as saying, “I don’t know what the presidents will decide, it is up to them.”

He noted that one-on-one conversations have occurred during previous meetings of U.S. and Russian (and Soviet) leaders.

On Sunday, Secretary of State Blinken told CNN that a solo Biden news conference  is "the most effective way to be able to share with the free press what they talked about and what we're focused on, and to make sure that you all get a chance to ask as many questions as possible."

This is not a contest about who can do better in front of a press conference to try to embarrass each other. It’s about making myself very clear what the conditions are to get a better relationship are — with Russia.

We’re not looking for conflict. We are looking to resolve those actions which we think are inconsistent with international norms, number one. Number two, where we can work together, we may be able to do that in terms of some strategic doctrine that — that may be able to be worked together. We’re ready to do it. And there may be other areas. There’s even talk there may be the ability to work together on climate.

So the bottom line is that I think the best way to deal with this is for he and I to meet, he and I to have our discussion. I know you don’t doubt that I’ll be very straightforward with him about our concerns. And I will make clear my view of how that meeting turned out, and he’ll make clear how — from his perspective, how it turned out.

Ushakov said a weighty agenda of topics will include the war in Ukraine, and the coronavirus pandemic, while “regional problems” to be discussed would include the Iranian nuclear issue, the Middle East, Syria, Libya, Afghanistan, the Korean peninsula, and the Armenia-Azerbaijan dispute over Nagorno-Karabakh.

The two presidents would also look for common ground on issues like the fight against cybercrime, climate change, and the Arctic.

Among those expected to take part in the larger sessions are U.S. Ambassador to Russia John Sullivan and Russian Ambassador to the U.S. Anatoly Antonov, neither of whom has been at their posting for months.

Lavrov recalled Antonov “for consultations” in March after Biden in a television interview replied in the affirmative when asked if he viewed Putin as “a killer.” (The Russian Embassy referred at the time to “certain ill-considered statements of high-ranking U.S. officials.”)

Moscow then suggested that the U.S. recall Sullivan, who returned to Washington in April.

The U.S. official briefing on Air Force One did not rule out the possibility that one outcome of the summit could be an agreement to return both envoys to their posts.

Russian Deputy Foreign Minister Sergey Ryabkov, who will also be at the summit, told Izvestia earlier that an agreement to return the ambassadors “would be an important signal, no doubt, that a certain extremely difficult page is turning and something new is beginning.”

‘Nothing is off the table’

Asked what Biden would say to Putin about Russia’s treatment of the imprisoned Kremlin critic Aleksey Navalny, the U.S. official declined to give a “preview,” but did say that “when the other side tries to say that there are issues that are off the table or that won’t be on the agenda, for the American president, nothing is off the table.”

Former Secretary of State Mike Pompeo in a Fox News op-ed on Tuesday said Biden was showing up in Geneva “with a self-dealt weak hand that could have been much stronger.”

He argued that the Trump administration had been “tougher on Russia than any other since the end of the Cold War – something you will never hear the media acknowledge.”

“Whether imposing an unprecedented sanctions campaign against Russian entities, arming our friends in Ukraine with weapons of war to resist Russian aggression, convincing our NATO allies to pony up $400 billion in new defense spending, or other measures, we reasserted American strength to thwart Putin’s dream of a restored Russian empire.”

Biden, however, had already begun to squander the leverage, Pompeo claimed, while expressing the hope that he would “exercise the options available to him to right this ship and secure America from Russian malign activity.”

Fyodor Lukyanov, chairman of the Council on Foreign and Defense Policy, a research group that advises the Russian government, argued that the bilateral relationship has gotten so bad, the leaders should focus on averting armed confrontation, and treat regional geopolitical issues and economic differences as matters of secondary importance.

“As long as Russia and the U.S. have nuclear capabilities to wipe each other out, they will have to discuss how to keep the peace,” he wrote in an op-ed for the pro-Kremlin outlet RT.

“If the Geneva meeting ends with Putin and Biden saying that they will ask specialists in their fields – military officials, diplomats or scientists – to work together to bolster stability, taking into account the deadly potential of new weapons, the importance of cyberspace, nuclear proliferation and so on, it will be called a success,” Lukyanov said.

“In other words, both states should once again make military power and the fear of escalation the cornerstone of our bilateral relations, as it was during the Cold War.”