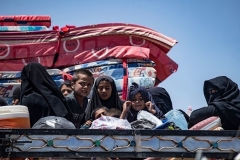 Syrian women and children from the Al-Hol camp in the northeastern Syria. (Photo by Delil Souleiman/AFP via Getty Images)

(CNSNews.com) – The Biden administration informed Congress on Monday that the United States will admit up to 125,000 refugees in fiscal year 2022, doubling the ceiling of 62,500 that it had hoped to resettle in FY 2021.

An admission ceiling of 125,000 refugees would be the highest set by any administration in almost three decades.

“New political violence, intensifying humanitarian crises, climate change-induced displacement, and increased threats to refugees in countries of asylum all support a need to increase refugee admissions to the United States and among our global resettlement partners,” states the proposed presidential determination (PD) sent to Congress.

When Biden took office he initially did not throw out his predecessor’s cap of 15,000 – the lowest set since the modern-day refugee admissions program was established in 1980 – but after refugee advocacy groups protested he issued a new PD in May, with a ceiling of 62,500 admissions.

With just ten days of the fiscal year to run, however, it’s clear actual admissions for FY 2021 will fall well below that.

The latest State Department Refugee Processing Center data available indicate that as of the end of August, only 7,637 refugees – or just 12.2 percent of the 62,500 cap – had been resettled since the fiscal year began on October 1 last year.

The majority of the refugees admitted this year, almost 70 percent of the total, arrived in just four months – May, June, July and August.

The Afghanistan figure does not apply to Afghans who have arrived under the Congress-created Special Immigrant Visa program covering those who worked for the U.S. over the past 20 years.

Arrivals of SIV-holders have increased significantly since July, as the drawdown of U.S. and coalition forces neared completion and the Taliban advanced across the country.

In Monday’s report, the administration is proposing to allocate 40,000 refugee places to applicants from Africa, 35,000 from the Near East-South Asia region, 15,000 from East Asia, 15,000 from Latin America and the Caribbean, and 10,000 from Europe and Central Asia, leaving the remaining 10,000 as an unallocated reserve.

Compared to last year’s regional allocations (see chart below), the most obvious change is a smaller allocation for refugees from Africa – from 44 percent of the total (excluding unallocated reserve) in FY 2021 to 34.7 percent in FY 2022, a drop of almost 10 percent.

Regarding the other four regions, allocations for FY 2022 are somewhat larger than they were for FY 2021 – bigger by 1 percent for East Asia; by 0.7 percent for Europe; by 3 percent for Latin America and the Caribbean; and by 4.4 percent for the Near East-South Asia.

“The proposed FY 2022 allocations are based on refugee resettlement needs and humanitarian policy priorities,” the report states. “Areas of particular focus in FY 2022 include higher expected arrivals of Afghan refugees with the recent P-2 designation and providing more safe and legal pathways, including resettlement, for vulnerable individuals in Honduras, Guatemala, and El Salvador.”

Among applicants to be prioritized are vulnerable people in the northern triangle countries and individuals falling within a category listed in the 1989 Lautenberg Amendment and its 2004 extension, including Jews and other minorities in Eurasia as well as persecuted religious minorities in Iran.

Ethnic minorities from Burma and the DRC are prioritized, as are Afghans under a new Priority 2 (P-2) designation applying to those who don’t meet the minimum time-in-service requirement for the SIV program, but were employed by the U.S. government or armed forces, a government-funded program or project, or a U.S.-based media or non-governmental organization.

Other groups determined to be priorities in FY 2022 include Uyghur and other Turkic Muslims in China; activists, journalists, and dissidents from Hong Kong; Rohingya Muslims from Burma; religious or ethnic minority Syrians and Iraqis; and “individuals persecuted on the basis of sexual orientation, gender identity, or sex characteristics.”

State Department spokesman Ned Price said the Departments of State, Homeland Security and Health and Human Services will now consult with Congress over the proposed PD.