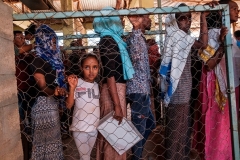 Eritrean refugees line up for a distribution of items organized the United Nations High Commissioner for Refugees (UNHCR) in Ethiopia on January 30, 2021. (Photo by EDUARDO SOTERAS/AFP via Getty Images)

(CNSNews.com) – President Biden’s new determination on refugee admissions, announced on Monday, indicates that when it comes to resettling refugees in the U.S., his administration is prioritizing those from Africa, the Middle East and South Asia over other parts of the world.

As the administration has been signaling for weeks, Biden lifted the refugee admission ceiling for the current fiscal year from the record-low 15,000 set by his predecessor, to 62,500.

Less than three weeks earlier, a previous presidential determination (PD) dismayed refugee resettlement advocates and some members of Congress because it did not lift President Trump’s 15,000 ceiling – the lowest set since the modern-day refugee admissions program was established in 1980.

The White House then scrambled to address the backlash, saying Biden would adjust the cap after all, and do so by mid-May.

Rather than wait that long, the president issued a new PD on Monday, saying he was doing so on the basis of having received “additional briefing and a more comprehensive presentation regarding the capacity of the executive departments and agencies charged with administering USRAP [the United States Refugee Admissions Program] to increase refugee admissions while responding to other demands.”

The most noticeable difference is that the Near East and South Asia has become a higher priority as a region of origin for refugee admissions, while Latin America and the Caribbean has become a lower priority.

Looking back at the USRAP over decades, the regions accounting for the largest numbers have changed over time, in line with world events and administration priorities. Overall, East Asia has accounted for the largest number – 1,489,700 refugees between 1975 and 2021, with the biggest influx coming in from Indochina after 1975 to the mid-1990s.

The next biggest influx (596,571 refugees between 1975 and 2003) was from the former Soviet Union, particularly in the first half of the 1990s following the disintegration of the USSR.

In order to reach the 62,500 ceiling by the end of FY 2021, an average of more than 10,000 refugees would have to be resettled each month from April until the end of September.

“The sad truth is that we will not achieve 62,500 admissions this year,” Biden said in a statement on Monday. “We are working quickly to undo the damage of the last four years. It will take some time, but that work is already underway.”

“That goal will still be hard to hit. We might not make it the first year,” he said. “But we are going to use every tool available to help these fully-vetted refugees fleeing horrific conditions in their home countries. This will reassert American leadership and American values when it comes to refugee admissions.”

An admission ceiling of 125,000 refugees would be the highest in almost three decades.