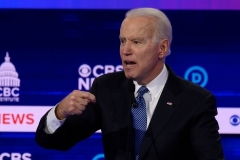 The Democratic presidential debate in Charleston, S.C. on February 25 is believed to be the first time Joe Biden spoke publicly about the need for U.S. health experts to get into China, where the coronavirus outbreak first emerged. (Photo by Jim Watson/AFP via Getty Images)

(CNSNews.com) – Democratic presidential nominee Joe Biden in an interview Thursday suggested that President Trump had not pressed sufficiently for China to allow U.S. health experts to visit early on during the coronavirus outbreak, at a time when Biden said he and others were “insisting that they go in.”

In fact, administration officials offered to send help to China within four days of the World Health Organization first becoming aware of an unknown outbreak in Wuhan on the last day of 2019. The offers would be made repeatedly over the following weeks, and on February 17 two U.S. experts were finally allowed to visit, as part of a WHO team, arriving in Wuhan on February 22.

Three days after that, February 25, is the first time Biden is known to have spoken publicly about the need for U.S. experts to visit China.

In an interview with CNN’s Jake Tapper on Thursday, Biden asked why Trump had praised China and called it transparent. Then he continued, “Why didn’t he insist that the 44 people we had there [in China] and – while I and others are insisting that they go in and have access to see really what is happening, to know the detail. Why did he not insist on that?”

(It’s not clear what Biden was referring to by “the 44 people we had there.” The number 44 came up in the WHO’s very first statement on the outbreak, when it said 44 confirmed cases of the illness had been confirmed in Wuhan by January 3. Biden may also have been referring to the number of officials at the CDC office in China, which Reuters reported in March had been reduced during the Trump administration.)

The partial timeline below compiled by CNSNews.com shows the dates, and comments by various officials about various U.S. offers of help to China:

Late 2019:  Cases of pneumonia with unknown etiology emerge in Wuhan.

Dec. 31: WHO picks up an official statement on Wuhan health authority’s website about the situation and asks Chinese authorities for more information.

Jan. 4:  CDC Director Robert Redfield emails China CDC director George Gao, “I would like to offer CDC technical experts in laboratory and epidemiology of respiratory infectious diseases to assist you and China CDC in identification of this unknown and possibly novel pathogen.”

Jan. 6-7:  The CDC issues a travel notice for Wuhan due to coronavirus, and establishes a coronavirus incident management system to share and respond to information about the virus.

Jan. 13:  Thailand reports the first confirmed case outside China – a woman who flew from Wuhan to Thailand on Jan. 8.

Jan. 14:  At a Democratic presidential debate in Des Moines, Iowa, neither Biden nor any other candidate raises the coronavirus issue.

Jan. 22:  U.S. authorities report first case in the United States – a man who traveled from Wuhan to Washington State.

Jan. 27: Trump tweets, “We are in very close communication with China concerning the virus. Very few cases reported in USA, but strongly on watch. We have offered China and President Xi any help that is necessary. Our experts are extraordinary!”

Jan. 28: HHS Secretary Azar confirms U.S. first made the offer on January 6 for a CDC team to visit China. “I reiterated that offer when I spoke to China’s Minister of Health on Monday [Jan. 27], and it was reiterated again via the World Health Organization today. We are urging China: More cooperation and transparency are the most important steps you can take toward a more effective response.”

Jan 30: WHO declares the outbreak to be a public health emergency of international concern, after holding off on a decision for a week.

Feb. 2:  President Trump tells Fox News the U.S. has offered “tremendous help” to China in dealing with the epidemic.

Feb. 2: National Security Advisor Robert O’Brien tells CBS: “We continue to offer assistance to the Chinese. We’ve offered to send over CDC and other U.S. medical and public health professionals. And we have not heard back yet from the Chinese on those offers, but we’re prepared to continue to cooperate with them … We’ve made the offer, and we’ll see if they accept the offer.”

Feb. 3:  Dr. Nancy Messonnier, director of the CDC’s National Center for Respiratory Diseases, tells a briefing: “We have folks ready to go to China … We are just waiting. As soon as we are allowed to go, we will be there.” Messonnier says, “We at CDC have incredibly strong scientists who have a lot of technical experience in really similar diseases, as well as in these kinds of diseases. And our presence on the ground in China would be a help to folks in China who are trying to unravel the thing and make the best recommendations possible for their country and the world.”

Feb. 7: Azar tells a briefing, “our longstanding offer to send world-class experts to China to assist remains on the table.”

Feb. 7: At a Democratic presidential debate in Manchester, N.H., only one candidate (Pete Buttigieg) makes a passing reference to “what we’re seeing coming out of China.” Biden says nothing. (By now, China is reporting more than 34,500 confirmed cases and more than 700 deaths. There are 288 reported cases outside China, including 12 in the U.S.)

Feb 14: CDC’s Messonnier says CDC still has no information on whether its experts will be included in a 12-member team which the WHO says it plans to send to China.

Feb. 17:  A WHO team, including experts from CDC and NIH, arrives in China and visits three provinces, but not initially the epicenter of Wuhan.

Feb. 19: At a Democratic presidential debate in Las Vegas, none of the candidates nor the moderators raise the issue. (By now, China is reporting more than 74,000 confirmed cases and more than 2,100 deaths. There are more than 1,070 cases were confirmed in 26 other countries, including 15 in the U.S.)

Feb. 22:  The WHO team finally arrives in Wuhan.

Feb. 26: Biden at a CNN town hall says if he were president “I would insist that China allow our scientists in to make a hard determination of how it started, where it’s from, how far along it is. Because that is not happening now.”

Mar. 18: A senior State Department official briefing on background says, “The first thing [the] U.S. did was call the CDC. CDC reached out to the PRC and says, ‘We’re here to help. Let us know what we can do.’ The WHO followed up and says, ‘We’re here to help. Tell us what you do.’ You guys can do the math, how long it took. Like, by my calculation, it took a month for the WHO to actually be allowed into the country to investigate.”

Mar. 22: Trump tells a briefing that he asked Chinese President Xi Jinping personally “whether or not we could send some people, and they didn’t want that – out of pride.” “They don’t want us sending people into China, to help them,” he says. “I did discuss that about sending our people in. And, they didn’t really respond. We went again; they didn’t respond.”

Mar. 27: Biden says at CNN virtual town hall, “early on in this crisis, we said — I said, among others, that, you know, you should get into China, get our experts there, we have the best in the world, get them in so we know what’s actually happening. There was no effort to do that.”