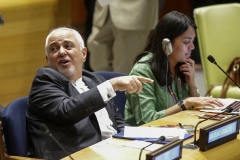 The Trump administration imposed strict limits on the movements of Iranian diplomats, including Foreign Minister Javad Zarif, at the U.N. in New York in 2019. They have now been lifted. (Photo by Kena Betancur/AFP via Getty Images) The letter sent to the U.N. Security Council on Thursday. (Image: Twitter/@PamelaFalk)

(CNSNews.com) – The Biden administration told the U.N. Security Council Thursday it was rescinding its predecessor’s determination that U.N. sanctions on Iran, terminated under the nuclear deal, had been “snapped back.”

It also signaled its readiness to return to talks with Iran and the other parties to the agreement known as the Joint Comprehensive Plan of Action (JCPOA), for the first time since President Trump withdrew in 2018.

And in a third gesture, the U.S. mission to the U.N. in New York City informed the Iranian mission that the stringent travel restrictions placed on its diplomats in mid-2019 were no longer in force.

Those rules, which applied also to Foreign Minister Javad Zarif, restricted the Iranians to travel between U.N. headquarters, the Iranian mission about six blocks away, and the nearby residence of the Iranian ambassador. The situation will revert to the earlier limits, also applying to North Korean and Syrian diplomats, confining travel within a 25-mile radius of midtown Manhattan.

The trio of gestures come just days after Iraqi Shi’ite militias – strongly suspected to be Iran-backed – fired several dozen rockets at a base housing U.S.-led coalition troops, killing a civilian contractor and injuring an American service member among others.

They also come at a time when Iran has ratcheted up its brinkmanship by announcing its intention to stop adhering, as of next Tuesday, to a Non-Proliferation Treaty protocol that allows International Atomic Energy Agency (IAEA) monitors to carry out snap inspections of facilities that raise concerns.

Criticism was quick in coming.

“Reports that [Biden] is approaching Iran about the failed nuclear deal are deeply concerning,” tweeted Sen. Rick Scott (R-Fla.)  “Nothing can be discussed until Iran cooperates and its ability to develop nuclear weapons & produce ballistic missiles is permanently removed.”

“It is concerning the Biden administration is already making concessions in an apparent attempt to re-enter the flawed Iran deal,” said Rep. Michael McCaul (R-Texas), ranking member on the House Foreign Affairs Committee.

“The Trump administration created leverage for President Biden on Iran – we should not squander that progress,” he said. “We need to secure a better deal that keeps the American people safe from the full range of Iran’s malign threats.”

Non-proliferation expert Andrea Stricker, a research fellow at the Foundation for Defense of Democracies (FDD), called the timing of the sanctions notification to the Security Council “horrific.”

“For a new administration, [it] sends the message that Iran’s nuclear advances are way to get concessions & even militia attack resulting in injured Americans isn’t beyond the pale,” she said.

“We’re already making concessions to Iran even before Iran comes into full compliance with the JCPOA,” said Republican Jewish Coalition executive director Matt Brooks. “The Biden administration is reverting right back to the counter-productive policies of the Obama-Biden years.”

Democratic Sen. Chris Murphy of Connecticut called the willingness to return to talks “great news,” but said the U.S. must move quickly. “The sooner we reunite with Europe, Russia, and China on Iran policy, the sooner we can extend the Iran deal and work with these partners to curb Iran’s other malevolent behavior.”

One of two State Department officials on a conference call to reporters on Thursday night rejected the “concessions” criticism: “I’d say these are not concessions to Iran; these are concessions for common sense, talking to Iran to try to resolve the nuclear issue.”

On the easing of the travel limits in New York, the second official said, “the idea here is to take steps to remove unnecessary obstacles to multilateral diplomacy.”

The letter sent to the U.N. Security Council on Thursday. (Image: Twitter/@PamelaFalk)

It then stated the U.S. position that the U.N. sanctions which had been lifted under the nuclear deal remain lifted. (It does not refer to the unilateral U.S. sanctions restored by the Trump administration.)

The three letters now withdrawn are:

--An Aug. 24 document notifying the council of Iran’s significant non-compliance with the JCPOA.

--An Aug. 24 letter laying out the Trump administration’s legal argument for its right to initiate sanctions snapback under resolution 2231 – the 2015 resolution that enshrined the JCPOA.

--A Sept. 23 letter stating that all sanctions that had been in place before resolution 2231 was adopted were now reinstated.

When the Trump administration took those actions, virtually the entire Security Council objected, saying the U.S. no longer had the right to do so because it had withdrawn from the nuclear deal. The administration countered that despite its withdrawal, the wording of resolution 2231 made clear that any of the six “participant” countries – the U.S., Britain, France, Russia, China and Germany, known collectively as the P5+1 – could initiate snapback in the event of Iranian non-compliance, “unconditionally.”

The administration resorted to the action only after the council defeated its earlier attempt to extend of a U.N. arms embargo on Iran beyond its Oct. 18, 2020 expiry date. Russia and China, two of the powers most likely to sell arms to Iran once the restrictions were gone, vetoed the measure.

In the view of the Trump administration, sanctions snapback had the effect of also extending the arms embargo; the other council members disagreed.

Up until now, the Biden administration has said consistently that the U.S. will re-enter the JCPOA only after Iran has returned to full compliance. For its part, Iran insists the U.S. must lift its sanctions first.

On Thursday, Secretary of State Antony Blinken met virtually with his counterparts from Britain, France, and Germany, the three European parties to the JCPOA.

Later in the day, State Department spokesman Ned confirmed that “the United States would accept an invitation from the European Union high representative to attend a meeting of the P5+1 and Iran to discuss a diplomatic way forward on Iran’s nuclear program.”

Enrique Mora, political director in the E.U. external service, tweeted that he was ready to invite the parties “to an informal meeting to discuss the way forward.” (The E.U. plays a coordinating role in the JCPOA implementation.)

After his administration invoked sanctions snapback in New York last fall, Trump issued an executive order threatening sanctions against any party that sells arms to Iran. Acting under its authority, the Departments of State, Commerce, and U.S. Treasury then announced that any government, company, or financial institution that does business with the regime’s defense, missile, and nuclear sectors would be exposing itself to the risk of U.S. “secondary” sanctions.

That executive order remains in place as of Thursday.