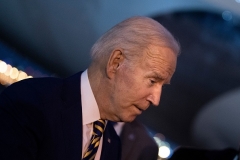 (CNSNews.com) – “Unlike Trump, I don’t shock our allies,” President Biden said on Tuesday, when asked whether he would coordinate with U.S. allies in the event he plans to announce further travel restrictions related to the new “omicron” variant of the coronavirus.

Speaking to reporters as he prepared to fly back to Washington from Minnesota, Biden was asked how long new travel restrictions affecting eight southern African nations would remain in place.

“Well, it kind of depends,’ he said. “It’s going week to week here to determine what we need and what the state of affairs.”

“We’re going to learn a lot more in the next couple of weeks about the lethality of this virus [variant], about how much it spreads, about whether what we have can control it, et cetera,” Biden continued. “So it will depend on those – those issues.”

“Are you committed to sort of coordinating that?” the reporter asked.

“Unlike Trump,” the president replied, “I don’t shock our allies.”

(Biden’s chaotic withdrawal from Afghanistan shocked U.S. allies; and France recently recalled its ambassador to Washington for the first time ever, blindsided by a U.S.-Australia-U.K. security agreement that effectively scrapped a French contract to build submarines for Australia.)

Biden was speaking a day after his restrictions on entry came into effect for non-U.S. citizen travelers who in the past fortnight have been in eight southern African nations.

The restrictions, which have also been put into place in various forms by dozens of other nations, have drawn criticism from the affected region and the World Health Organization.

“The prohibition of travel is not informed by science, nor will it be effective in preventing the spread of this variant,” South African President Cyril Ramaphosa said early this week, appealing to the U.S. and others to lift the restrictions “before any further damage is done on our economies and to the livelihoods of our people.”

The WHO said Tuesday that more than 50 countries were reported to have put travel measures in place in a bid to delay the arrival of cases of the omicron variant.

“Blanket travel bans will not prevent the international spread, and they place a heavy burden on lives and livelihoods,” it said. “In addition, they can adversely impact global health efforts during a pandemic by disincentivizing countries to report and share epidemiological and sequencing data.” 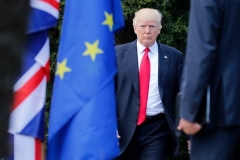 President Trump at a G7 summit in Sicily in 2017. (Photo by Jonathan Ernst/AFP via Getty Images)

Responding to the COVID-19 outbreak in Wuhan, the Trump administration from February 2 last year barred entry for any non-U.S. national who had visited China in the previous 14 days.

Weeks later, the restriction was expanded to cover any foreign national who had visited Iran within 14 days of arrival in the U.S.

Then in mid-March, Trump announced restrictions on travelers from Europe – specifically, the 26 countries that are members of the European visa-free travel area known as the Schengen zone. The measure applied to foreign travelers who had been in one of those countries within the previous 14 days, not to citizens, legal permanent residents or immediate family members of U.S. citizens.

European Union leaders protested, saying that the decision had been “taken unilaterally and without consultation.”

Just three days later, E.U. leaders agreed to enforce restriction of their own, prohibiting non-essential travel by non-citizens into the bloc.

“In the current circumstances, with the coronavirus now widespread throughout the E.U., the external border regime offers the opportunity of concerted action among member states to limit the global spread of the virus,” the E.U.’s executive Commission explained at the time.

Just before he left office last January, Trump issued a proclamation lifting the entry ban relating to European and other countries with effect from January 26 – the date from when all U.S.-bound travelers were required to have a negative COVID-19 test before boarding their flight.

But the incoming administration said it would not follow through with the plan.

“On the advice of our medical team, the Administration does not intend to lift these restrictions on 1/26,” tweeted Jen Psaki, who three days later would take up her post of White House press secretary.

“In fact, we plan to strengthen public health measures around international travel in order to further mitigate the spread of COVID-19. With the pandemic worsening, and more contagious variants emerging around the world, this is not the time to be lifting restrictions on international travel.”

Travel restrictions remained in place until November 8 this year, from when vaccinated foreign travelers have once again been allowed entry into the United States.