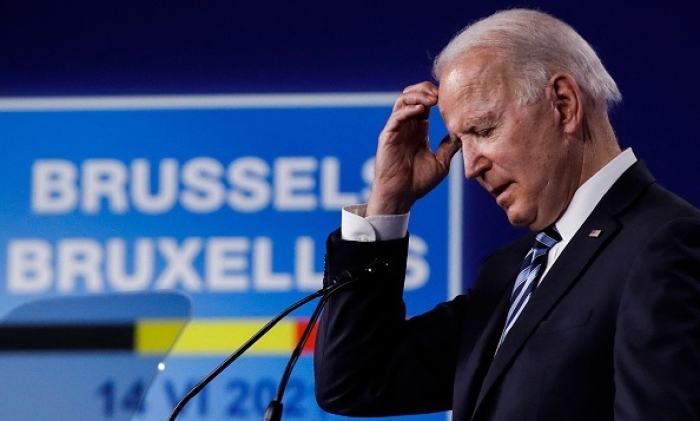 (CNSNews.com) – White House officials have repeatedly stated over recent months that the purpose of threatening sanctions against the Russian government as it appeared to be preparing to invade Ukraine was one of “deterrence.”

But President Biden got testy during a press conference in Brussels Thursday when a reporter suggested that deterrence had not worked in preventing Putin from launching his war last month.

“Let’s get something straight,” he told the reporter who asked the question. “You remember, if you’ve covered me from the beginning, I did not say that, in fact, the sanctions would deter him. Sanctions never deter. You keep talking about that.”

Biden went on to say that it was “the maintenance of sanctions,” sustaining them for not just next month or the following one, but for the rest of the year – “that’s what will stop him.”

When administration officials spoke about the deterrent aim of sanctions, they frequently did so in the context of calls – including from Republicans in Congress and the Ukrainian government – for the U.S. to impose sanctions immediately, rather than threaten to impose them in the event of an invasion.

In response, they contended that if sanctions were imposed directly, they would lose their deterrent effect.

National Security Advisor Jake Sullivan: “Our view on this is that the fundamental object of the policy the United States is pursuing, in lockstep with our European allies, is to deter a Russian military invasion of further territory of Ukraine.”

He also said the U.S. sanctions warnings were designed “to try to avert the invasion and deter the invasion into Ukraine. That is the object of our policy right now. Those are the steps we are taking. That’s what President Biden is doing in the messages that he’s sending to President Putin.”

White House Press Secretary Jen Psaki: “We are mindful of what we think is the most effective deterrent, and the severe economic sanctions pact is something that would be – go far beyond what was done and what was on the table in 2014, including the consideration of imposing unprecedented export control measures that would hit hard at President Putin’s ambitions are part of the discussion. And our assessment is that is most effective as – a deterrent tool and not as one we would do in advance.” 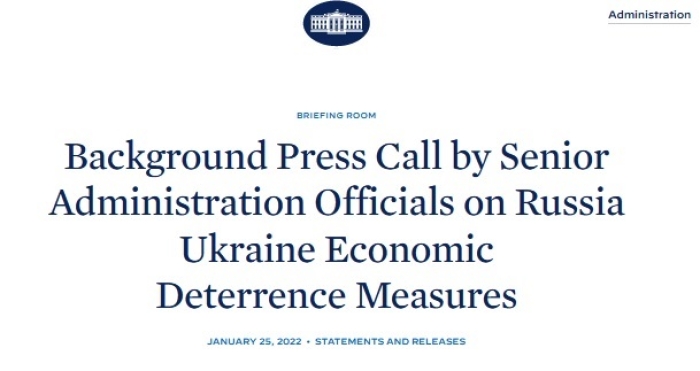 Psaki: “Our view is that sanctions can be an effective tool of deterrence, and the deepening selloff in Russian markets reflects our message – our message to Russia.”

Psaki: “As we’ve talked about a little bit in here, our collective view from our national security team is that sanctions are meant to be a deterrent. They are not – if you put all of the sanctions in place now, what is stopping them from invading?”

Vice President Kamala Harris, at a press briefing in Munich, Germany: “The purpose of the sanctions has always been and continues to be deterrence.”

Harris said the U.S. and allies were still hoping for “a diplomatic path out of this moment,” but even while doing so, “the deterrence effect, we believe, has merit.”

In response to a question about Italy expressing reservations about the prospect of energy sanctions, Harris replied that “Italy is very much at the table in terms of these conversations about how we can do this in a way that achieves its intended purpose, which – back to the earlier point – is about deterring Russia from invading a sovereign nation.”

Secretary of State Antony Blinken on CNN’s “State of the Union”: “The purpose of the sanctions, in the first instance, is to try to deter Russia from going to war.  As soon as you trigger them, that deterrent is gone.”

Blinken on NBC’s “Meet the Press”: “As soon as you trigger the sanctions, of course, any deterrent effect they may have is gone.”

Feb. 22 (after Putin recognized the “independence” of the self-proclaimed “people’s republics” in eastern Ukraine):

Deputy national security advisor for international economics Daleep Singh: “Sanctions are not an end to themselves. They serve a higher purpose. And that purpose is to deter and prevent. They’re meant to prevent and deter a large-scale invasion of Ukraine that could involve the seizure of major cities, including Kyiv.”

Psaki: “Deterrence is part of our objective. If he goes further, we will go further. We have a range of tools at our disposal.”

She added, “Our hope is that Putin will decide to de-escalate, that he will feel the threat of the sanctions, what the impact will be on the Russian economy, on the Russian people, on the people who surround him – they are meant to have a deterrent impact.”

One day later, Putin announced his “special military operation” – the invasion of Ukraine.

See also:Blinken Insists on Deterrent Value of Sanctions, After Zelensky Asks: ‘What Are You Waiting For?’ (Feb. 21, 2022)