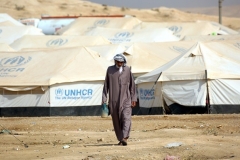 An Iraqi refugee who fled ISIS-controlled Mosul at a U.N.-run camp in northeastern Syria. (Photo by Delil Souleiman/AFP via Getty Images)

(CNSNews.com) – After drawing fire from refugee agencies and some congressional Democrats, the Biden administration is reversing its decision announced on Friday to keep the number of refugees to be resettled in fiscal year 2021 at the record-low 15,000 cap set by President Trump last fall.

On two Sunday talk shows, Secretary of State Antony Blinken and National Security Advisor Jake Sullivan both confirmed that President Joe Biden will, after all, raise the number of refugees expected to arrive before the end of the fiscal year.

Neither offered a number, and neither said the goal would be 62,500, as the Biden administration had indicated in February.

Most attention has focused on the admission cap issue, with the reversal coming after refugee resettlement groups expressed “shock” and outrage” over the administration’s “broken promise” to significantly raise the 15,000 ceiling set by President Trump for the fiscal year.

Some critics also questioned the delay in issuing a Presidential Determination (PD) on admissions – 85 days after the inauguration – with the Church World Service saying the lag “has caused irreparable damage to many refugees who were already approved for resettlement.”

But the question of refugee allocations has garnered less attention. Both Blinken and Sullivan claimed that Trump had blocked admissions from Africa and the Middle East, a restriction which they said Biden was now ending.

Sullivan charged that those restrictions had been “rooted in xenophobia and even racism.”

In an appearance on ABC’s “This Week,” Blinken also made the assertion about Africa and the Middle East.

“What the president has done now in signing the initial directive [on Friday], is to make sure we can start the process of actually bringing – bringing people in, and beyond that lifting restraints and – that the previous administration had imposed so that no one, for example, from Africa or the Middle East could come in. That has now been eliminated.”

But those claims distort the facts.

It is true that Trump’s PD of October 27 last year did not set out specific allocations for refugees from each of the five regions traditionally used in the U.S. refugee program: Africa, East Asia, Europe and Central Asia, Latin America and the Caribbean, and Near East and South Asia.

But the criteria that it did use would have covered refugees from all parts of the world, including Africa and the Middle East.  They included: those fleeing religious persecution; those falling into a category listed in the 1990 Lautenberg Amendment and its 2004 extension, the Specter Amendment; and those falling into a category in the Refugee Crisis in Iraq Act of 2007.

--Refugee admission data going back a decade or more show that a sizeable proportion of people admitted into the U.S. from countries in Africa and particularly the Middle East have been persecuted on account of religion.

--The Specter Amendment covers persecuted religious minorities such as Christians, Jews, and Baha’i in Iran – in the Middle East.

--And the Refugee Crisis in Iraq Act grants priority refugee status to certain categories of applicants from Iraq – again, in the Middle East. (The categories include Iraqis employed by the U.S. government in Iraq; employed in Iraq by U.S.-based media or non-governmental organizations; employed in Iraq by an organization closely associated with the U.S. Mission in Iraq and in receipt of U.S. federal funding; from persecuted religious or minority communities with close family members in the U.S.)

To say, therefore, that Trump barred admissions from Africa and the Middle East is misleading.

Even for the three countries that were singled out in Trump’s determination for non-admission of refugees on the basis of “high-risk areas of terrorist presence or control” – Somalia, Syria and Yemen – exceptions were made for religious persecution, U.S. Embassy referral, or family-reunification purposes.

In fact, of the total of 2,050 refugees to have been admitted to the U.S. in FY 2021 (as of March 31), the region accounting for the largest monthly arrival total was Africa – 224 refugees – in December, while Trump was still in office. And from the Middle East, more refugees arrived from Iraq, Iran, and Syria during the Trump portion of the fiscal year than during the Biden portion.

Overall, the largest monthly admission so far in FY 2021 was under the Trump administration – 598 in December. The lowest monthly number of admissions was 271, under Biden in March.

In Biden’s PD, which supersedes Trump’s, 7,000 refugee admission slots are reserved for applicants from Africa, 1,000 from East Asia, 1,500 from Europe and Central Asia, 3,000 from Latin America and the Caribbean, and 1,500 from the Near East and South Asia. There is also a reserve of 1,000 slots to be used as needed.

The Biden PD also includes a reference to a Feb. 4 executive order which lifted some restrictions relating to vetting.

Biden has promised to lift the refugee admission ceiling for FY 2022, which begins on October 1, to 125,000, its highest in almost three decades.