Belarus Leader: The U.S. Is Secretly Building Military Bases in Ukraine; 'We Cannot Allow This' 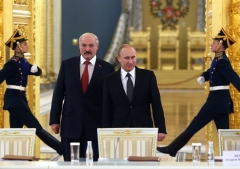 (CNSNews.com) – Belarusian President Alexander Lukashenko claimed on Monday that the United States was covertly setting up military bases in Ukraine, adding that he and Russian President Vladimir Putin were discussing the issue “and have agreed that some action should be taken there.”

“They are dragging NATO troops there, to Ukraine,” Lukashenko told his security chiefs. “Under the guise of training centers, they are actually creating bases. The United States is creating bases in Ukraine. It is clear that we need to react to this.”

If Belarus and Russia failed to respond, he said, they would be confronted by an unacceptable security situation on their borders, including the deployment of missiles.

“We did not subscribe to this and we cannot allow this,” he said.

In Moscow, Kremlin spokesman Dmitry Peskov confirmed that Putin and Lukashenko have discussed concerns about the deployment of NATO assets in Ukraine.

“The topic of the potential expansion of NATO’s military infrastructure to the territory of Ukraine has been repeatedly mentioned by President Putin,” the TASS state news agency quoted Peskov as saying.

He said Putin had told Lukashenko that expanding NATO infrastructure into Ukraine would be crossing a “red line” for Moscow. The TASS report did not cite Peskov as responding specifically to claims about the U.S. secretly setting up bases in Ukraine.

The uptick in rhetoric comes less than a fortnight after Russia and Belarus wrapped up massive joint military exercises, and amid deep disputes between Lukashenko and his European Union neighbors.

The autocrat sometimes labeled “Europe’s last dictator” has been targeted for E.U. and U.S. sanctions since allegedly stealing an election last summer, cracking down on subsequent protests, and imprisoning opposition leaders.

In response, Lukashenko has been accused by neighboring Poland and Lithuania, members of both the E.U. and NATO, of facilitating a stream of illegal migration across their borders, in what critics have called a form of “hybrid warfare.” 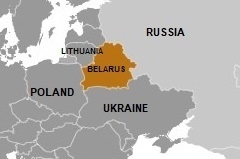 The U.S. government has joined the criticism. In a phone conversation with Lithuanian Prime Minister Ingrida Simonyte earlier this month, National Security Advisor Jake Sullivan “condemned the Lukashenko regime’s orchestration of irregular migrant flows across its borders,” according to a NSC spokesperson.

(At the U.N. in New York on Monday, Belarusian Foreign Minister Vladimir Makei hit back, ridiculing the notion that Belarus, with a population of 10 million, could wage “hybrid war” against the E.U. with its population of 500 million – “even if we had the muscles of Arnold Schwarzenegger.”)

In addition to the tensions on his northern and western borders, Lukashenko also has an ax to grind with his southern neighbor, Ukraine, accusing it of supporting the Belarusian pro-democracy opposition.

The two countries, which share a long border, were both formerly part of the Soviet Union. But while Ukraine is pushing for Euro-Atlantic integration and aspires to join NATO – a prospect bitterly opposed by the Kremlin – Belarus remains Russia’s only European ally.

“On our side of the Ukrainian-Russian border we can figure out ourselves what to do in the interests of the Ukrainian people, as well as Ukraine’s and Europe’s security,” he added.

“It is obvious that Alexander Lukashenko has already fully mastered the patterns of Russian propaganda rhetoric about threats from the West and Ukraine in particular,” he told Ukraine’s national news agency, Ukrinform.

While Lukashenko was busy talking about “illusory American bases” in Ukraine, Nikolenko said, he was “simultaneously turning our neighboring Belarus into Russia’s military base.”

Nikolenko advised Belarus to focus on preserving its own sovereignty and independence, “rather than becoming an appendage of Russia.”

Annual military exercises between Ukraine, the United States, and a number of NATO allies and partners, are currently underway in western Ukraine.

On the day they began, Russia began a three-day naval exercise in the Black Sea, firing at targets off the coast of Ukraine’s strategic Crimea peninsula, which it has occupied since 2014.

And on Monday, Russia kicked off more military drills, this time in Crimea itself.