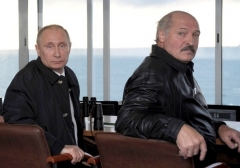 (CNSNews.com) – Belarus’ autocratic president said Tuesday that upcoming military exercises with Russia were not aimed at increasing tensions with the West, but he also spoke of the need to bolster forces along Belarus’ border with Ukraine where, he said, “the situation is getting more complicated all the time.”

“It is a demonstration of our strength,” the official BELTA news agency quoted President Alexander Lukashenko as saying in reference to the planned war games. “They should see that we are not alone and that we will defend ourselves if we have to.”

Russia’s massing of troops on its territory near Ukraine’s eastern borders lies at the heart of the current tensions between Moscow and the West.

But the deployment of Russian forces to Belarus, a close ally, has further upped the temperature, with a senior State Department official warning last week that the development “raises concerns that Russia could intend to station troops in Belarus under the guise of joint military exercises in order, potentially, to attack Ukraine from the north.”

President Biden said on Tuesday that Russian forces were now “along the entire Belarus border” with Ukraine, although he also acknowledged that trying to determine President Vladimir Putin’s intentions was “a little bit like reading tea leaves.”

“Ordinarily, if it were a different leader – the fact that he continues to build forces along Ukraine’s border from Belarus, all the way around – you’d say, ‘Well, that means that he is looking like he’s going to do something,’” Biden told reporters while visiting a small business in D.C.

“But then you look at what his past behavior is and what everyone is saying in his team, as well as everyone else, as to what is likely to happen,” Biden said. “It all comes down to his – his decision.”

At the Pentagon, Press Secretary John Kirby also expressed concern about Belarus, referring to “a consistent accumulation of combat power by the Russians” in that country, as well as in western Russia near its borders with Ukraine.

“We continue to see additional combat forces, Russian combat forces, move into the western part of their country, around the border with Ukraine, and into Belarus,” he told a briefing. “And again, that remains deeply concerning to us.”

According to Russia’s defense ministry, the main part of the exercises in Belarus will run from February 10-20, and involve practicing “tasks of suppressing and repelling external aggression during a defensive operation, as well as countering terrorism and protecting the interests of the [Russia-Belarus] Union State.”

Troops and equipment are continuing to arrive in preparation for the wargames, including army artillery units and marines from the Pacific Fleet, it said.

The ministry said drills would take place on five military training grounds and four airfields in Belarus, two of which (Luninets and Brestsky) are situated close to Ukraine’s border.

At its closest point the border with Belarus lies about 60 miles from Kyiv, the Ukrainian capital.

Lukashenko said the exercises with the Russians coincide with the deployment of additional Belarusian army units to the border with Ukraine, where the security situation was “bad.”

He said Belarus was not “whipping up” tensions or looking for conflict, “but if something happens, we and our military should be ready for anything.”

Lukashenko, a longstanding Russian ally, has relied increasingly on Putin for support amid worsening relations with Europe and the West since a disputed 2020 election victory last year and a subsequent harsh crackdown on protests.

In separate comments published on the presidency website, Lukashenko complained that State Department officials had told Belarus’ diplomats in New York with a “patronizing tone” that the U.S. “will impose sanctions if we allow Putin and Russia this or that,” including offering to host Russian nuclear weapons.

He said Belarus’ enemies “want to bring us to the brink of an abyss, they know how we will respond to that.”

“In the context of the situation developing around us, here in the region, and given the Washington’s recent statements, we will have to defend the borders of our country,” Lukashenko said. “We know how to do it, and we will do it for sure.”

Referring to the warnings given to Belarusian diplomats, State Department spokesman Ned Price said Tuesday that the U.S. in recent days has “made clear to Belarus that if it allows its territory to be used for an attack on Ukraine, it would face a swift and decisive response from the United States and our allies and partners.”

“If an invasion were to proceed from Belarus, if Russian troops were to permanently station on their territory, NATO could well have to reassess our own force posture in the countries that border Belarus,” he added.

In addition to Ukraine and Russia, countries bordering Belarus are Lithuania, Latvia, and Poland.

Price also said the “surge” of Russian troops into Belarus is an affront to latter’s sovereignty.