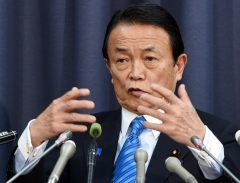 (CNSNews.com) – China’s foreign ministry has scoffed at a senior Japanese politician’s warning that his country could help the United States to defend Taiwan in the event China invades the island democracy.

China is no longer the country it was in the days of imperial Japan’s aggression last century, said foreign ministry spokesman Zhao Lijian, reacting to the reported remarks by Deputy Prime Minister Taro Aso.

In a speech at a Liberal Democratic Party (LDP) fundraiser in Tokyo on Monday, Aso said Tokyo could view a Chinese invasion of Taiwan as a “survival-threatening” situation for Japan, the Kyodo news agency reported.

“If that is the case, Japan and the U.S. must defend Taiwan together,” he said.

Aso also serves as finance minister, sits on Japan’s National Security Council, and is a former prime minister and foreign minister. The government’s chief spokesman, Cabinet Secretary Katsunobu Kato, declined to comment when asked at a briefing Tuesday if the remarks were in line with government policy.

“Japan hopes that the Taiwan issue will be resolved through direct dialogue between parties concerned in a peaceful manner,” Kato said. “That has been our consistent stance.”

“Japanese militarism once committed innumerous crimes in the aggression against China,” he said. “However, some politicians are still coveting Taiwan till this day. This fully shows that they haven't learned the lesson from history.”

“Today’s China is no longer what it was back then,” Zhao continued. “We will never allow anyone to meddle in the Taiwan question in any way. No one should underestimate the resolve, the will, and the ability of the Chinese people to defend their national sovereignty and territorial integrity.”

China’s Nationalists fled to Taiwan in 1949 after losing a civil war to Mao Zedong’s communist forces. The People’s Republic of China views the island as a renegade province that will be reincorporated into “one China” eventually – by force if necessary.

In his televised speech in Tiananmen Square, Xi declared that “resolving the Taiwan question and realizing China’s complete reunification is a historic mission and unshakeable commitment of the Communist Party of China.”

“We must take resolute action to utterly defeat any attempt towards Taiwan independence,” he added.

Under the Taiwan Relations Act, passed by the U.S. Congress in 1979 after President Jimmy Carter cut formal diplomatic ties with Taiwan and recognized the PRC, the United States is committed to protecting the island from unprovoked aggression, and to providing it with military aid.

In a joint statement last April, President Biden and Japanese Prime Minister Yoshihide Suga referred to the Taiwan situation: “We underscore the importance of peace and stability across the Taiwan Strait and encourage the peaceful resolution of cross-Strait issues.”

Zhao’s remarks about Japanese politicians “still coveting Taiwan” alludes to the fact imperial Japan occupied the island (formerly known as Formosa) from 1895 – when China’s Qing dynasty ceded it to Japan as part of a treaty ending the First Sino-Japanese War – until Japan’s defeat at the end of World War II in 1945.

The U.S. drafters of Japan’s post-war constitution inserted pacifist elements that remain in place today, with article nine of the constitution renouncing the use of force to settle international disputes.

The ruling LDP has long sought to remove the war-renouncing parts of the constitution, with Suga’s predecessor, Prime Minister Shinzo Abe, proposing changes to give Japan’s Self-Defense Force the status of a fully-fledged military.

The issue is a highly sensitive one in regional relations, as both South Korea and China were victims of Japanese aggression in the first half of the 20th century.

In recent months, China has been winding up tensions with Taiwan by deploying sizeable numbers of military aircraft close to Taiwanese airspace.

Two weeks ago, Japanese Defense Minister Nobuo Kishi said in an interview with Bloomberg, “The peace and stability of Taiwan are directly connected to Japan and we are closely monitoring ties between China and Taiwan, as well as Chinese military activity.”