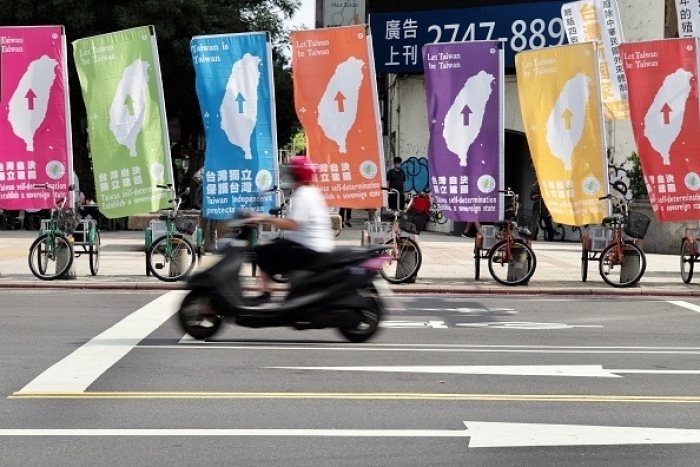 A motorcyclist rides past a display of pro-Taiwan independence flags in Taipei. (Photo by Sam Yeh / AFP via Getty Images)

(CNSNews.com) – After days of firing missiles, flying sorties and conducting live-fire exercises around Taiwan, Beijing on Thursday continued to exchange verbal barbs with the island democracy it claims as its own, renewing threats of force even as Taipei advised it not to engage in “wishful thinking” about unification.

A week after a brief visit to Taiwan by House Speaker Nancy Pelosi infuriated the Chinese Communist Party-led government, it issued a lengthy white paper on the Taiwan question and “reunification” – its first in 22 years – providing its justification for claiming the island.

The almost 9,200-word document says reunification by peaceful means is the Chinese Communist Party’s “first choice” in resolving the dispute, but that it “will not renounce the use of force, and we reserve the option of taking all necessary measures.”

“We will always be ready to respond with the use of force or other necessary means to interference by external forces or radical action by separatist elements,” the CCP document states.

The paper reiterates the plan to bring Taiwan into the mainland’s embrace under the same “one country, two systems” principle that governed the return of Hong Kong in 1997, a formula which it claims “has been a resounding success” in practice.

(Beijing promised that the former British colony would enjoy limited autonomy under a capitalist system for at least 50 years, but less than halfway into that period, the CCP in 2019 cracked down on mass pro-democracy activism, stifling democracy in a process decried by the West – and viewed with deep disquiet in Taiwan.)

Responding to the white paper, the Taiwanese government’s Mainland Affairs Council (MAC), which handles issues relating to China, said it was “full of wishful thinking, disregard for facts, and lies.”

“Taiwan insists that neither side of the Taiwan Strait has jurisdiction over the other and firmly rejects the ‘one country, two systems’ principle,” it said. “This is the status quo and the current reality in the Taiwan Strait.”

The dispute has its origins in the Chinese civil war, which ended when Mao Zedong’s communists declare the People’s Republic of China (PRC) in 1949 while Chiang Kai-shek’s defeated Republic of China (ROC) nationalists decamped to Taiwan.

Four years earlier, the ROC had been one of the 50 founding members of the United Nations. Its representatives continued to hold the “China” seat at the U.N. until 1972, when the U.N. General Assembly passed a resolution handing the seat to the communist PRC and ejecting Taiwanese representatives.

Over the ensuing decades, Taiwan became a thriving democracy and economic success story, but isolated in the international community at China’s insistence.

That 1972 U.N. measure, resolution 2758, is a key pillar of Beijing’s claims to Taiwan, a point again underlined in the CCP’s new white paper.

“This resolution settled once and for all the political, legal and procedural issues of China’s representation in the U.N., and it covered the whole country, including Taiwan,” it reads. 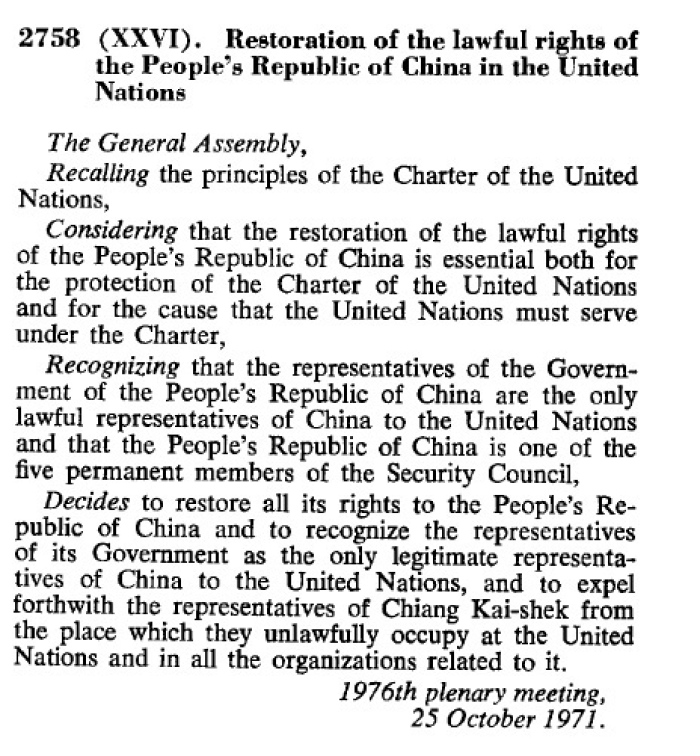 “It also spelled out that China has one single seat in the U.N., so there is no such thing as ‘two Chinas’ or ‘one China, one Taiwan.’ Resolution 2758 is a political document encapsulating the one-China principle whose legal authority leaves no room for doubt and has been acknowledged worldwide.”

In fact, resolution 2758, which is just four paragraphs in length, does not say Taiwan is a part of China, or mention its political status or sovereignty at all.

‘Hit them where it hurts’

Responding Thursday to Taiwan’s “wishful thinking” response to the white paper, the spokesman for the Taiwan affairs office on the Chinese State Council, Ma Xiaoguang, said Taiwan’s “slander” showed that the white paper had “hit them where it hurts.”

The document demonstrates the CCP’s resolve and “commitment to national reunification” and its opposition to “secessionists and foreign interference,” he said.

At the foreign ministry in Beijing, spokesman Wang Wenbin accused the Taiwanese authorities of trying to “mislead the public.”

“I would like to stress that realizing complete national reunification is the shared aspiration of all the Chinese people and an unstoppable historical trend,” he said. “We are ready to create vast space for peaceful reunification; but we will leave no room for separatist activities of any form.”

Wang said that by colluding with external forces to seek independence, Taiwan’s leaders “will only accelerate their own demise and push Taiwan into an abyss of disaster.”

Chinese officials frequently say “compatriots” on both sides of the strait support unification.

But in a regular opinion survey conducted by the MAC since the mid-1990s, a large majority of Taiwanese respondents has consistently said the “one country, two systems” formula was not applicable for solving the China-Taiwan dispute.

In the most recent poll, last June, the majority stood at 75.8 percent.

Other findings in that MAC poll included:

--83.6 percent of respondents opposed Beijing’s “one China” principle and its position that Taiwan is an inalienable part of China’s territory

--82.2 percent agreed that the objective reality and current status quo across the Taiwan Strait is that Taiwan and the PRC “are not subordinate to each other”