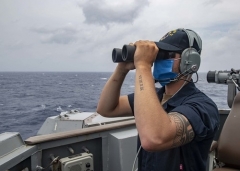 A U.S. Navy sailor on the on the bridge wing of the guided missile destroyer USS Mustin in the South China Sea on Thursday. (Photo: U.S. Navy/MC3 Cody Beam)

(CNSNews.com) – The Chinese military claimed on Friday that it had warned off a U.S. Navy destroyer sailing in disputed waters in the South China Sea, one day after the Pentagon said China was escalating tensions in the area by firing ballistic missiles.

The U.S. Pacific Fleet reported that the guided-missile destroyer, USS Mustin, had conducted a “freedom of navigation” operation Thursday in the vicinity of the Paracel islands, one of many such missions designed “to refute illegal claims to international waters.”

The Paracels (called Xisha by China) are an island group disputed between China and Vietnam.

Beijing claims virtually the entire South China Sea, where it is embroiled in territorial disputes with Vietnam, the Philippines, Malaysia, Taiwan, Indonesia, and Brunei. In some cases China has constructed artificial islands in support of its claims.

A spokesman for the People’s Liberation Army (PLA) southern theater command, Colonel Li Huamin, said in a statement that the USS Mustin had “trespassed into the Chinese territorial waters off the Xisha islands without permission.”

PLA naval and air forces had tracked the vessel “and warned it away,” he claimed.

Li said the U.S. should immediately stop provocations and control its military operations in the South China Sea, “so as to avoid any contingency.”

He provided no evidence that China’s actions had affected the destroyer’s course. The U.S. Pacific Fleet did not respond to queries about the alleged incident by press time.

Earlier this week, the PLA Navy reportedly fired up to four ballistic missiles during exercises in the vicinity of the Paracels.

In reaction, the Department of Defense said Thursday Beijing was violating commitments it has made both to regional countries and the United States.

“Conducting military exercises over disputed territory in the South China Sea is counterproductive to easing tensions and maintaining stability,” it said in a statement, calling the drills the latest in a series of Chinese “actions to assert unlawful maritime claims.”

The DoD said Beijing was violating an agreement reached between China and the 10-member Association of Southeast Asian Nations (ASEAN) bloc in 2002, including an undertaking to “exercise self-restraint in the conduct of activities that would complicate or escalate disputes.”

The activities also stood in contrast to Beijing’s “pledge to not militarize the South China Sea,” it said, alluding to a commitment made by Chinese President Xi Jinping, speaking alongside President Obama at the White House in 2015.

Xi was referring at the time specifically to the Spratlys, hundreds of islets and reefs about 500 miles south east of the Paracels, subject to several competing claims. China in 2016 rejected a U.N. tribunal’s ruling that there was no legal basis for its claims there.

The Pentagon said the U.S. informed China last month that it would continue to monitor the situation, with the expectation that Beijing would reduce its militarization and coercion of neighbors.

Instead, China had chosen to “escalate its exercise activities by firing ballistic missiles.”

China’s defense ministry spokesman Colonel Wu Qian told a press briefing on Thursday that the recent “routine” military exercises near the Spratly and Paracel islands did not target any country. He did not mention missile launches.

Wu accused “some U.S. politicians” of trying to undermine relations between the U.S. and China for electoral purposes.

“Such actions are very unpopular, since it puts the lives of both sides’ frontline military members as well as the fundamental interests of the two peoples at risk,” he said.

Highlighting how seriously the U.S. military is taking China, Defense Secretary Mark Esper said in Honolulu on Thursday that 50 percent of the coursework at the National Defense University now focuses on that one country.

To advance the CCP agenda, Esper said, the PLA “continues to pursue an aggressive modernization plan to achieve a world-class military by the middle of the century.”

“This will undoubtedly embolden the PLA’s provocative behavior in the South and East China Seas, and anywhere else the Chinese government has deemed critical to its interests.”

This week the State Department announced travel restrictions on Chinese officials and state-owned enterprises involved in efforts to bolster Beijing’s claims in the waterway, through “large-scale reclamation, construction, or militarization of disputed outposts” or coercion against other claimants.

In an editorial, the CCP-affiliated Global Times tried to link the sanctions to the U.S. presidential election.

“The sanctions are designed with the election in mind,” it said. “Washington wants to use the sanctions to show its hardline attitude toward China, and to benefit Donald Trump’s presidential campaign.”