(CNSNews.com) – Ahead of Friday’s anticipated news conference by President Trump on U.S.-China relations, the administration on Thursday harnessed the support of three close allies in confronting Beijing over its controversial decision to impose a national security law in Hong Kong.

The British, Canadian, and Australian governments joined the United States in warning that the move will jeopardize Hong Kong’s “stability and prosperity,” and urging the People’s Republic of China (PRC) to work with the government and people of the territory to find a solution.

China is presenting the dispute over the law, which its National People’s Congress (NPC) approved on Thursday, as a further example of U.S. hostility, amid bitter wrangling over the coronavirus pandemic, Taiwan, and other issues.

“U.S. politicians such as [Secretary of State Mike] Pompeo arrogantly believe that Hong Kong's destiny is in their hands,” the Chinese Communist Party (CCP) organ Global Times said in an editorial Thursday. “Pompeo represents the U.S.’ hysterical geopoliticization of everything that has to do with China.”

“What Beijing is trying to do here is paint this situation with Hong Kong and the rest of all Chinese actions here as [a] contest strictly between the U.S. and China, painting the U.S. as the hostile side,” Assistant Secretary David Stilwell told reporters earlier. “The fact is that it’s not just U.S. and China.”

Countering the PRC’s narrative, the four allies characterized China’s actions as a violation of its commitments contained in a binding international agreement, registered with the United Nations.

“China’s decision to impose a new national security law on Hong Kong lies in direct conflict with its international obligations under the principles of the legally-binding, U.N.-registered Sino-British Joint Declaration,” Pompeo said in a joint statement with his counterparts, Britain’s Dominic Raab, Australia’s Marise Payne, and François-Philippe Champagne of Canada. 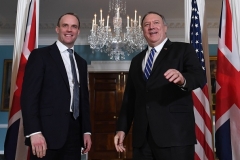 Signed in 1984 and registered with the U.N. the following year, the Joint Declaration governed the return of the former British colony to Chinese rule in 1997. Despite preparing to fall under the sovereignty of the CCP-ruled PRC, Hong Kong was promised a high level of autonomy and a capitalist system for at least 50 years – the so-called “one country, two systems” formula.

China has long wanted the prosperous but politically-unruly territory to enact security legislation outlawing subversion against the central government and other seditious activities.

But Hong Kong administrations have struggled for years to do so in the face of strong opposition from pro-democracy campaigners and mass protests, some of which have turned violent. Now Beijing is moving to impose such legislation directly, by fiat.

The Xinhua state news agency reported that the NPC’s approval on Thursday was met by applause in the Great Hall of the People.

Among its provisions, Xinhua said, the law will “allow the central government’s national security organs to set up agencies in Hong Kong when needed.”

Global Times said the law aims to prevent, stop, and punish any activity in Hong Kong “that attempts to split up the country, subvert state power, organize and perpetrate terrorist activities, including other actions that seriously endanger national security.”

Echoing Beijing’s talking points about the U.S. being behind the unrest in Hong Kong, the CCP mouthpiece said, “The legislation will directly strike against the U.S.-controlled proxies and political groups in Hong Kong, who had previously incited trouble in the city with little concern about the consequences.”

It cited Chinese “experts” warning that veteran pro-democracy leaders such as Jimmy Lai, 71, and 81-year-old Martin Lee, “are highly unlikely to escape from legal punishment, because the one purpose of the legislation is to punish those people who collude with the U.S. and other foreign forces to undermine Hong Kong’s stability and public order.”

In their joint statement, the U.S., Britain, Canada and Australia said the China-imposed security law would “undermine the one country, two systems framework.”

“It also raises the prospect of prosecution in Hong Kong for political crimes, and undermines existing commitments to protect the rights of Hong Kong people.”

They warned that the China’s action “would curtail the Hong Kong people’s liberties, and in doing so, dramatically erode Hong Kong’s autonomy and the system that made it so prosperous.”

On Wednesday, Pompeo reported to Congress the administration’s determination that Hong Kong is not “sufficiently autonomous” from China, under U.S. law, to merit the special trade status that the territory has continued to benefit from since the 1997 handover.

Trump is expected in his Friday press conference to lay out the path ahead, arising from that assessment.