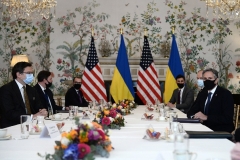 (CNSNews.com) – The Biden administration has been pledging “costs” and “consequences” for malign Russian behavior for several months but at a time when a large troop buildup on Ukraine’s borders has sent tensions soaring, a senior State Department official on Tuesday called for patience, while suggesting that steps may be coming soon.

“Be patient,” the official told reporters accompanying Secretary of State Antony Blinken on a visit to Brussels dominated by the crisis. “Stay tuned.”

On the day of President Biden’s inauguration the White House announced that he had tasked the intelligence community to carry out a review of Russian actions including hacking, election interference, the attempted assassination of dissidents, and allegations of bounties offered on the lives of U.S. troops in Afghanistan.

Since then administration officials have repeatedly cited the review, asserting that there will be consequences for Moscow’s damaging actions.

“President Biden has been very clear about this,” Blinken said again in an NBC interview on Sunday. “If Russia acts recklessly or aggressively, there will be costs, there will be consequences.”

The official in Brussels, who was briefing anonymously, was asked about the fact the administration has yet to take punitive measures against Russia.

After advising patience, the official said, “I can’t tell you a timeline for any particular announcements. But certainly – I mean, I think the president and the secretary have both been clear that they’ve been looking and reviewing that.”

Biden spoke by phone Tuesday to President Vladimir Putin, voicing “concerns over the sudden Russian military build-up in occupied Crimea and on Ukraine’s borders,” and calling on Russia “to de-escalate tensions,” according to a White House readout. “President Biden emphasized the United States’ unwavering commitment to Ukraine’s sovereignty and territorial integrity.”

The readout said Biden made clear that the U.S. “will act firmly in defense of its national interests in response to Russia’s actions, such as cyber intrusions and election interference,” and that he had suggested a summit with Putin “in a third country in the coming months to discuss the full range of issues facing the United States and Russia.”

A Kremlin statement on the call said Biden had “expressed interest in normalizing the state of affairs on the bilateral track and establishing stable and predictable interaction on pressing matters such as ensuring strategic stability and arms control, Iran’s nuclear program, the situation in Afghanistan, and global climate change.”

It said Putin had also “outlined approaches to a political settlement [in Ukraine] based on the Minsk package of measures.” The 2014 and 2015 Minsk agreements are meant to provide a framework for peace in the eastern Donbass region, where fighting between Russian-backed separatists and government forces have cost more than 13,000 lives since 2014.

The Kremlin insists the movement of tens of thousands of troops near Ukraine’s border in recent weeks does not threaten any country, while accusing Ukrainian President Volodymyr Zelensky of provocations at the expense of Russian-speaking communities in Donbass.

In contrast to the staid tone of the White House and Kremlin readouts of the phone call, the State Department official briefing on background accused Russia of waging a disinformation campaign “as the Putin regime seems to want to prepare its public opinion for some kind of action against Ukraine.” The official described it as a “kind of media madness.”

From the Russian side, strong language came a day earlier from Foreign Minister Sergei Lavrov, who described the government in Kyiv as “putschists” and “neo-Nazis,” and condemned the U.S. for promoting a “so-called rules-based order” and “neo-colonial thinking.”

In Brussels, Blinken met with his Ukrainian counterpart, Dmytro Kuleba, who painted his country’s standoff with Russia as part of a broader struggle between democracy and authoritarianism.

“[The] Russian buildup is taking place not only along the border of Ukraine, but along the border of the democratic world,” he said before the meeting. “For thousand of kilometers, to the north and to the east of our border with Russia, there is no democracy. So this is the struggle that is taking place between democracies and authoritarianism. And in this struggle, the support of the United States is absolutely crucial and deeply appreciated.”

The meeting came on the sidelines of several NATO engagements, including a session at which Kuleba briefed members of the alliance on the situation in and near Donbass.

Last week Zelensky called on NATO to move ahead with a long-delayed step of putting Ukraine on a path to membership.

Asked whether the question of NATO membership had come up during Blinken’s talks with his Ukrainian counterpart, the senior State Department official said, “this meeting didn’t get into that particularly.”

The official reiterated that the U.S. stands by “the Bucharest declaration of 2008.” That decision, which has been restated at every NATO summit since 2008, deferred granting “membership action plans” to Ukraine (and Georgia) saying only that the two “will become members” at some future, unspecified date.

The Kremlin bitterly opposes further expansion of the alliance in its former sphere of influence. Three former Soviet constituent republics, Latvia, Lithuania, and Estonia, joined NATO in 2004, as did all of Moscow’s erstwhile Warsaw Pact allies between 1999 and 2009.

Senate Homeland Security Committee ranking member Rob Portman (R-Ohio) said Tuesday it was time for NATO “to provide Ukraine a pathway to full membership,” adding that the country “has proved to be a worthy and capable ally who is seeking to align with the democratic west.”