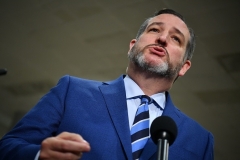 (CNSNews.com) – A handful of outspoken U.S. lawmakers have long angered the Chinese Communist Party (CCP) by leading the condemnation of policies including abusive behavior in Hong Kong and Xinjiang, and on Monday Beijing hit back, targeting Sens. Marco Rubio (R-Fla.) and Ted Cruz (R-Texas), and Rep. Chris Smith (R-N.J.) for sanctions.

The Trump administration has led international condemnation of China’s security policies in the far-west Xinjiang province, where more than a million minority Muslim Uyghurs have been incarcerated in re-education camps, and the CCP uses intrusive digital surveillance systems to track citizens’ movements and activities.

CCP media outlets frequently describe them and a few others – including Sens. Tom Cotton (R-Ark.) and Josh Hawley (R-Mo.), as well as House Speaker Nancy Pelosi (D-Calif.) – as “troublemakers.”

(Cruz was labeled “vile” after leading an initiative to rename a street in front of the Chinese Embassy in Washington for jailed Chinese dissident Liu Xiaobo, who died three years ago on Monday.)

Chinese foreign ministry spokeswoman Hua Chunying on Monday described the reciprocal sanctions as a “response to the U.S. wrong moves.”

What happens in Xinjiang, she said, is China’s internal affair, and the U.S. has no right to interfere.

She then reiterated the CCP talking point that its policies in Xinjiang are aimed at combating the “three evils” of terrorism, separatism and extremism.

“The Chinese government is absolutely determined in its resolve to safeguard its sovereignty, security and development interests, to combat violent terrorist, separatist and religious extremist forces, and to oppose any external interference in Xinjiang affairs and China’s internal affairs.”

“Bummer,” Cruz deadpanned on Twitter. “I was going to take my family to Beijing for summer vacation, right after visiting Tehran.”

In a subsequent statement, Cruz said the CCP was “terrified and lashing out.”

“They forced over one million Uighurs into concentration camps and engaged in ethnic cleansing, including horrific forced abortions and sterilizations,” he said. “These are egregious human rights atrocities that cannot be tolerated.”

“Unfortunately for CCP leaders, I don’t have plans to travel to the authoritarian regime that covered up the coronavirus pandemic and endangered millions of lives worldwide.”

Smith, a veteran human rights-focused lawmaker, attributed his inclusion to his work on Xinjiang-related legislation, and a recent floor speech in which he held Chinese President Xi Jinping directly responsible for “genocide” against the minority Muslims.

“The U.S. sanctions Chinese officials for egregiously abusing human rights and Beijing responds by sanctioning Members of Congress for defending human rights,” he said in a statement.

Smith recalled that the CCP-affiliated Global Times last May threatened him with “pain” over his authoring of China-related legislation.

“Two weeks ago, I was briefed by the FBI that the threat was real and the CCP’s action could take many forms, from bribes to social media disinformation and worse and for starters – visa denial – today’s sanction.”

Smith said he had been planning a trip to Beijing, Hong Kong, and the Xinjiang capital of Urumqi, once the COVID-19 pandemic had abated.

The CECC called China’s move “another attempt by Beijing to try to intimidate and silence voices around the world who are critical of its human rights policies and violations of universal standards and norms.”

“The CECC will not be silenced and will continue to press the U.S. and the international community to stand together and shine a bright light on Beijing’s human rights abuses and the officials who carry them out.”