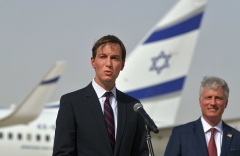 (CNSNews.com) – Lashing out at the U.S.-brokered Israel-UAE agreement, Iran’s supreme leader Ayatollah Ali Khamenei in a speech on Tuesday seemed particularly offended by the role played by President Trump’s son-in-law, who is Jewish.

An excerpt of his remarks to education department heads, posted on Khamenei’s English-language Twitter feed, said, “the UAE acts in agreement with the Israelis & filthy Zionist agents of the U.S. – such as the Jewish member of Trump’s family – with utmost cruelty against the interests of the World of Islam.”

After the United Arab Emirates became the first Arab state in 26 years to normalize relations with Israel, this week Kushner joined National Security Advisor Robert O’Brien on the first ever commercial flight from Israel to the Gulf state.

The agreement included a commitment by Israel to suspend controversial plans to extend its sovereignty over some of the territories disputed between Israel and the Palestinians, as envisaged in Trump’s Mideast peace proposal.

Despite this, the Palestinian leadership repudiated the normalization agreement, viewing it as a further weakening of pan-Arab unity around the principle of tying recognition of Israel with a resolution of the Palestinian issue.

(The PLO executive committee last week called on all Arab states “not to follow the footsteps of the United Arab Emirates which recently signed a normalization agreement with apartheid Israel.”)

Apart from the Palestinian leadership and Iranian regime, others vocally rejecting the Israel-UAE agreement include the Assad regime in Syria, Turkey’s Islamist government, and the Hamas and Hezbollah terrorist groups. 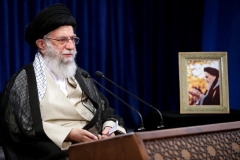 In his video conference remarks to educators on Tuesday, Khamenei expressed the hope the Emirati rulers would “wake up” and make compensation for their recent actions.

By allowing “the Zionists to set foot in the region,” he said, the UAE had consigned the question of Palestine “to oblivion.”

“The UAE betrayed the world of Islam, Arab nations, regional countries, and Palestine itself,” Khamenei declared. “Of course, this betrayal will not last long, but the stain of this infamy will remain on them forever.”

Twitter did not block, flag or restrict access to the tweet in which Khamenei referred to “filthy Zionist agents of the U.S. – such as the Jewish member of Trump’s family.”

In his remarks Tuesday Khamenei also revisited another familiar theme – his conviction that the U.S. is trying to infiltrate education systems in countries like Iran to push Western norms and lifestyles.

“Today, the Western social philosophy has proven to be a failure, even in the West itself, and its elements of corruption are quite visible from Hollywood to the Pentagon,” he said. “The enemy seeks to achieve what it is unable to do in military ways through infiltration and using tools such as the 2030 Agenda.”

The Education Agenda 2030, one of the U.N.’s Sustainable Development Goals, calls on countries to guarantee access to education for all people, whatever their age, sex or religion. Governments around the world signed onto the non-binding guidelines in 2015.

Although Rouhani signed on at the time, Khamenei later criticized him for doing so, banning compliance with the plan and describing it as a plot “to spread Western values and culture throughout the world.”

Among those in Iran who face restrictions of varying severity when it comes to education are women and members of the Baha’i faith. The regime does not recognize the Baha’i religion, one of Iran’s largest minority groups, and views its adherents as apostates.