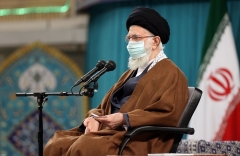 (CNSNews.com) – As talks aimed at returning the U.S. and Iran to compliance with the 2015 nuclear deal edge towards a possible resolution, Iranian supreme leader Ayatollah Ali Khamenei on Tuesday took a fresh swipe at Washington, accusing both President Biden and his predecessor of working to destroy America’s reputation.

Addressing Iranian air force commanders in Tehran, Khamenei said the American people today “are receiving a blow from a place they had never imagined before, from their own presidents – the current one and the previous one.”

He said Presidents Biden and Trump had “joined hands to destroy with their actions whatever was left of the U.S.’s reputation.”

Khamenei did not expand on that theme, but went on to complain about Western media censorship. He also said Iran needs to move from defense to offense against the enemy’s “hybrid warfare” in the form of economic, political, security, media, and diplomatic aggression.

It was left to Kayhan, a hardline daily whose editor is appointed by and serves as an adviser to Khamenei, to elaborate on the supreme leader’s attack on Biden and Trump.

“When the Leader of the Islamic Revolution points out that the former and the current presidents of the U.S. have joined hands to ruin whatever is left of their country’s reputation, it is a reality,” an unidentified writer for the paper opined.

“If the scoundrel Donald Trump of the Republican regime had axed the U.S. feet while in power at the White House for four years, it is now crystal clear that the present Democrat regime headed by Joe Biden and his blurred vision of realities, is sawing the branch on which Uncle Sam has chosen to sit.”

“He is pursuing the same self-destructive policies of his predecessor, regarding Iran, its steadily growing scientific-technological progress, and the will of West Asia’s awakened masses, who in opposition to the rootless ruling regimes and their treason against Islam and Muslims, are fully determined to rid the region of not only the unwanted military presence of the Americans but the illegal existence in Palestine of the racist/terrorist entity called Israel.”

(The “rootless ruling regimes and their treason against Islam and Muslims” refers to Arab states like the UAE and Bahrain that signed normalization agreements with Israel during the Trump administration.)

The Kayhan writer said it was “an undeniable fact that the U.S. is hurtling headlong into disaster through its criminal policies against the rest of the world.”

“American provocations against Russia and China, respectively in Ukraine and Taiwan, are bound to backfire with disastrous consequences for the U.S. regime and its comrades-in-crimes against world people,” the article concluded.

Khamenei’s remarks came during an address on a day commemorating the decision by senior Iranian air force officers to pledge allegiance to Ayatollah Ruhollah Khomeini during the 1979 Islamic revolution, a pivotal event which regime media say “led to victory.” 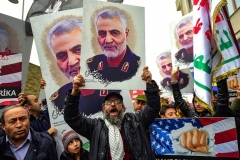 Protesters in Istanbul hold pictures of Iranian commander Qasem Soleimani, killed by a US drone strike at Baghdad's international airport on January 3, 2020. (Photo by YASIN AKGUL/AFP via Getty Images)

He used the occasion to gripe about Western media actions he views as censorship, raising as an example social media platforms removing images of slain Islamic Revolutionary Guard Corps (IRGC) Qods Force chief Qassem Soleimani, “despite their claim to freedom of expression.”

“They put a ban on the publication of any word or picture that is contrary to the West’s policies,” he said. “At the same time, they use that same environment to destroy Islam and the Islamic Republic.”

In 2019, Instagram took down accounts of Soleimani and other senior IRGC officials, after the Trump administration designated the IRGC as a foreign terrorist organization.

Despite Khamenei’s criticism, he and other senior regime figures have an active presence on other U.S. social media.

The supreme leader’s office has Twitter accounts in at least 11 languages (English, Farsi, Arabic, French, Spanish, Russian, German, Italian, Hindi, Turkish, and Urdu), with a combined following of more than 1.72 million as of Tuesday.

Other senior Iranians who enjoy exposure on Twitter include former President Mahmoud Ahmadinejad (139,000 followers), and Mohsen Rezai, a member of Raisi’s cabinet who is wanted by Argentina for suspected involvement in the deadliest terrorist attack in the country’s history (185,000 followers).

Even as Khamenei and others in the regime use the platforms to share their views, the regime blocks citizens from accessing Twitter and Facebook, as well as the popular encrypted messaging app Telegram. Iranians do find ways around the restrictions, however, including access via virtual private networks or proxies.

During a discussion last week hosted by the lobby group Iranian Americans for Liberty, former ambassador and acting director of national intelligence Richard Grenell criticized U.S. tech companies for allowing the Iranian regime to use social media accounts to disseminate “not only misinformation but violence and antisemitism and homophobia.”

“This is unbelievable that Big Tech allows this to happen, and I think we’ve got to constantly raise our voices that this hypocrisy of allowing the hate and the terror to be spewed on social media is unacceptable.”