Austin Meets With Chinese Counterpart, Who Says ‘China Bears No Responsibility’ For Tensions 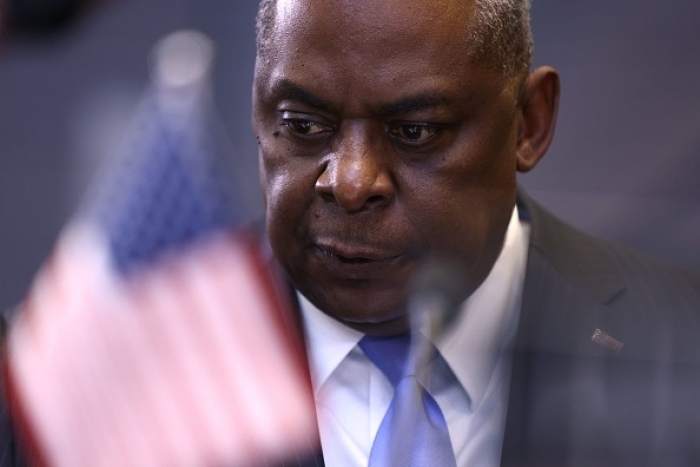 (CNSNews.com) – Defense Secretary Gen. Lloyd Austin held talks with his Chinese counterpart on Tuesday on a range of irritants in the relationship, with Beijing once again characterizing its claims to Taiwan as a “red line” that must not be crossed.

China’s defense ministry said after the talks that Defense Minister Gen. Wei Fenghe had made clear that “China bears no responsibility” for the tensions in the relationship – it was the result of an “incorrect strategic assessment” by the United States.

The meeting in Cambodia was the latest high-level bilateral exchange coming out of an agreement reached by President Biden and Chinese President Xi Jinping at their summit this month to work on putting the rocky relationship back on track.

That agreement has already seen a resumption of official interaction between the two countries’ top climate envoys – which, like military exchanges, Beijing suspended in response to House Speaker Nancy Pelosi’s visit last August to Taiwan, a self-governing democracy that China claims as its own.

A Pentagon readout of the meeting between Austin and Wei said the two also discussed North Korea’s missile provocations, and agreed both sides oppose the use or threat of use of nuclear weapons in the context of Russia’s war in Ukraine.

The agenda also featured tensions relating to the South China Sea, where China’s territorial and maritime disputes with several southeast Asian countries, and the U.S. insistence on exercising “freedom of navigation” in the strategic waterway and the skies above it, have stoked friction for years.

It said Austin “raised concerns about the increasingly dangerous behavior demonstrated by PLA aircraft in the Indo-Pacific region that increases the risk of an accident.” He had also “affirmed that the United States will continue to fly, sail, and operate wherever international law allows.”

It did not say if Austin raised with Wei Beijing’s decision last May to veto a Security Council resolution on North Korea.

That veto, by both China and Russia, ended a run of unanimous North Korea resolutions dating back to 2006. China said it vetoed the measure because it did not assess that the proposed text would help to maintain peace and security.

But it was Taiwan that, predictably, dominated the Austin-Wei talks, judging from the Chinese defense ministry’s account of the 90-minute meeting.

For the Pentagon’s part, it said Austin had reiterated the U.S. commitment to “the Taiwan Relations Act, the Three U.S.-China Joint Communiqués, and the Six Assurances.”

The 1979 Taiwan Relations Act, which has governed U.S. policy since the Carter administration cut formal diplomatic ties with Taiwan and recognized Beijing, makes it U.S. policy to provide Taiwan with defensive weaponry and “to maintain the capacity of the United States to resist any resort to force or other forms of coercion that would jeopardize the security, or the social or economic system, of the people on Taiwan.”

In the 1972, 1979 and 1982 “Joint Communiqués,” the U.S. acknowledged that Beijing has its particular position on “one China,” though without explicitly recognizing Beijing’s claims to the island, and without the U.S. itself taking a position on Taiwan’s sovereignty.

And in the “Six Assurances” to Taiwan the U.S. in 1982 made clear it “has not changed our long-standing policy on the matter of sovereignty over Taiwan.” That policy holds that the issue should be decided peacefully by the sides themselves.

The Pentagon said Austin had also “underscored his opposition to unilateral changes to the status quo and called on the PRC to refrain from further destabilizing actions toward Taiwan.”

In response to Pelosi’s visit, Beijing launched its biggest-ever military exercises around the island, and fired barrages of ballistic missiles, some landing in waters closer to Taiwan than ever before. 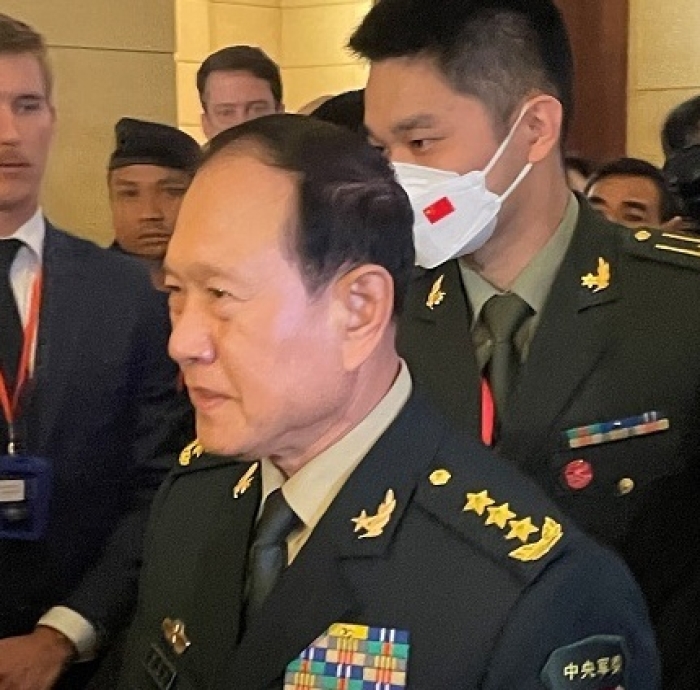 ‘The U.S. side must respect China’s core interests’

The Chinese defense ministry’s account of the Austin-Wei meeting came from ministry spokesman Senior Colonel Tan Kefei, briefing in Cambodia after the event.

Tan said that Wei had emphasized that the Taiwan question is “the core of China’s core interests and the first insurmountable red line in China-U.S. relations.”

Taiwan belongs to China, and “reunification” is the business of the Chinese people and no foreign interference will be tolerated, he said.

According to Tan’s description of the meeting, as recounted by state media including the Chinese Communist Party daily Global Times, Wei had accepted no responsibility on China’s part for the Taiwan-related tensions in the bilateral relationship.

“China bears no responsibility for the current state of China-U.S. relations,” Tan said. “The main reason is that the United States has made incorrect strategic assessment.”

The U.S. had for some time “been blurring, hollowing out and distorting its one-China policy, frequently selling arms to the island of Taiwan, assisting in training the island’s troops and sending senior officials to the island.”

“Every U.S. escalation and breakthrough on the Taiwan question is bound to meet China’s resolute and powerful countermeasure,” Tan said Wei had told Austin.

“China attaches great importance to the development of relations between the two countries and the two militaries, but the U.S. side must respect China’s core interests.”

Tan also said that the Chinese and U.S. militaries “should earnestly implement the important consensus reached by their heads of state, keep communication channels open, properly handle contradictions and differences, and strive to maintain the overall stability of their relationship.”

“Both sides should adhere to mutual respect, peaceful coexistence, and win-win cooperation, while jointly ensuring that China-U.S. relations move forward on the correct course, without deviating or stalling, not to mention colliding,” he said.

Tuesday’s meeting between the two defense ministers was their first since the blow-up over Pelosi’s visit. They last met on the sidelines of a regional security dialogue in Singapore in June.