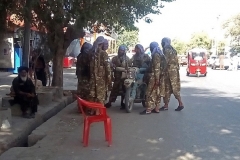 A group of Taliban fighers in Kunduz, a provincial capital captured by the group at the weekend. (Photo by AFP via Getty Images)

(CNSNews.com) – President Biden said on Tuesday he does not regret his decision to order the full withdrawal of U.S. troops from Afghanistan despite the steady takeover of cities by the Taliban. When asked if there was a change of plan, he replied “no.”

Instead, he underlined what other administration officials have been saying in recent days – that the U.S.-trained Afghan forces have the capability of seeing off the jihadists’ offensive, and need to step up and do so.

“We trained and equipped with modern equipment over 300,000 Afghan forces,” Biden told reporters after giving his response to Senate passage of the massive infrastructure bill. “They’ve got to fight for themselves, fight for their nation.”

“But they’ve got to want to fight,” he said, speaking deliberately and emphatically. “They have outnumbered the Taliban.”

Biden pointed to the costs of the war – the deaths and injuries of thousands of U.S. personnel and expenditure of more than one trillion dollars over 20 years.

He called on Afghanistan’s leaders to “come together,” and expressed optimism that the recent appointment of a new defense minister – a “serious fighter” – may be an indication that “they’re beginning to realize they’ve got to come together politically at the top.”

“We’re going to continue to keep our commitment,” Biden said. “But I do not regret my decision.”

A former interior minister and army chief of staff, Mohammadi served as a senior commander in the anti-Taliban Northern Alliance led by Ahmad Shah Massoud during the civil war in the 1990s.

The Taliban last week tried to assassinate him, launching what it called a “martyrdom attack” on his house in Kabul. Mohammadi and his family were not home when the terrorists detonated a car bomb before gunmen opened fire on the building. Eight people were killed.

Biden in April announced that all U.S. and coalition troops would be out of Afghanistan by September 11, a goal the Pentagon subsequently said would be reached by the end of August.

The Taliban in May expanded its offensive – it’s calling it “Operation Conquest” – capturing more than half of the country’s 421 districts, most of them sparsely-populated. 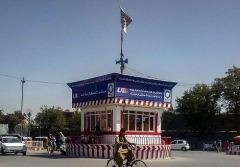 A Taliban flag flies atop a booth in the main square of the provincial capital of Kunduz, captured by the jihadists at the weekend. (Photo by AFP via Getty Images)

But since late last week, Taliban fighters have seized control of at least nine provincial capitals in the north, historically an anti-Taliban stronghold, and the southwest of the country. In some cases, Afghan authorities have reportedly handed over key facilities without a fight.

The Afghan National Defense and Security Forces (ANDSF) have focused much of their energies on defending two major provincial capitals in the south, Lashkar Gah in Helmand province and Kandahar in Kandahar province, where fighting has continued for weeks, as well as around Mazar-e-Sharif in the northern province of Balkh.

‘It’s their country to defend now’

Pentagon press secretary John Kirby also made comments this week alluding to the need for the Afghan forces to intensify their effort.

“They have a lot of advantages,” Kirby told a briefing on Monday, after noting the size of the ANDSF and the fact it has an air force. “Now, they have to use those advantages. They have to exert that leadership. And it’s got to come both from a political and from the military side.”

“It’s their country to defend now,” he said. “This is their struggle.”

At a Tuesday briefing, Kirby covered some of the same ground: “They have the capabilities at hand, and it’s really going to come down to the … leadership and the will to use those capabilities.”

At the same time, he stressed that the U.S. was supporting the ANDSF, including through “airstrikes in just the last several days” which he said were having “a kinetic effect on the Taliban on the ground.”

“300,000 troops, an air force, special forces, heavy equipment, training, a commitment of partnership, continued support from the United States, $3.3 billion in the budget for continuing support to the ANDSF,” he said.

“So the idea that the Taliban advance – continued Taliban advance is unstoppable, that there’s nothing that can stand in the way, that we’ll just have to watch it unfold, that is not the reality on the ground.”

The U.S. and other governments have said repeatedly that there is “no military solution” in Afghanistan, a point made again in a U.N. Security Council statement last week.

In apparent response to those statements, Taliban spokesman Zabihullah Mujahid tweeted on Tuesday, “When the enemy creates obstacles to negotiations and the political process, then the nation and the mujahideen must resort to a military solution and thus achieve their legitimate goal.”