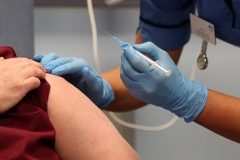 A woman receives a dose of the Pfizer-BioNTech COVID-19 vaccine in Edinburgh, Scotland on Tuesday. (Photo by Andrew Milligan/Pool/AFP via Getty Images)

(CNSNews.com) – A day after President Trump signed an executive order prioritizing Americans in the distribution of U.S.-developed or funded coronavirus vaccines, senior U.N. leaders cautioned against “vaccine nationalism,” arguing that in a pandemic, “no-one is safe until everyone is safe.”

They did not refer directly to the U.S. situation. Britain on Tuesday became the first country to begin mass COVID-19 vaccinations, with thousands of elderly and vulnerable people and frontline health workers receiving the Pfizer/BioNTech shot.

The order signed by Trump on Tuesday makes it policy “to ensure Americans have priority access to free, safe, and effective COVID-19 vaccines.” Once every American who wants a vaccine has received it, it says, “it is in the interest of the United States to facilitate international access” to vaccines that have been developed in the U.S., or procured by the U.S. government.

Both Trump and Vice President Mike Pence at the signing referred to the U.S. helping those in need around the world.

“Together, we will defeat the virus, and we will soon end the pandemic, and we will save millions and millions of lives, both in our country and all over the world,” Trump said, while Pence said, “America will continue to do our part to help families and peoples around the world.”

Secretary of State Mike Pompeo in a statement the same day said the president’s order “provides a mandate for the United States to facilitate international access to safe and effective COVID-19 vaccines, reaffirming the United States’ leadership and our commitment to help the world end this pandemic.”

Speaking to media in New York Wednesday after a meeting with African Union officials, U.N. Secretary-General Antonio Guterres said he was reiterating his “call for a COVID-19 vaccine to be a global public good available to everyone, everywhere and particularly, available in Africa.”

In response to a question about vaccines starting to be administered in “rich countries,” Guterres said, “It’s true we are seeing vaccine nationalism moving with full speed.”

The only way to “guarantee” that Africa gets the vaccines it needs, Guterres said, is to ensure that the global initiative known as COVAX is sufficiently funded.

A platform to help develop, manufacture and distribute vaccines, COVAX is co-led by the World Health Organization (WHO) and two public-private partnerships, the Global Vaccine Alliance, and the Coalition for Epidemic Preparedness Innovations.

It is supporting the development of nine vaccine candidates, and has secured hundreds of millions of doses of three of them, including at least 200 million doses for low-income countries, with the aim of fairly distributing two billion doses by the end of 2021.

“It is true that what we are seeing today is an enormous effort by several countries in order to ensure vaccines for their own populations,” he said, adding that COVAX financing requirements have to date “not been fully met.” Guterres said COVAX needs another $4.2 billion over the next two months.

“Richer countries would need to help poorer countries survive this crisis and recover better,” she said. “Leaders in powerful countries need to once again recognize that, more than ever, our world can only meet global challenges through global cooperation.”

“Narrow nationalistic responses will simply undermine collective recovery,” Bachelet continued. “The first test of this will be our ability to ensure that new COVID vaccines and tools reach everyone who needs them. The pandemic has highlighted over and over again that no one is safe until everyone is safe.”

On Thursday, a U.S. Food and Drug Administration advisory committee is expected to approve emergency use authorization (EUA) for the Pfizer/BioNTech vaccine. A week later it will consider an EUA application for the vaccine developed by Moderna. Both have been determined to be 95 percent effective against the coronavirus that emerged in Wuhan, China late last year.

Trump’s Operation Warp Speed team has pledged to have the distribution of vaccine doses underway across the nation within 24 hours of EUA.

Ahead of Trump’s signing of the executive order, the Chinese Communist Party mouthpiece Global Times in an editorial Monday accused the U.S. of selfishness, while painting China as an altruistic global benefactor. 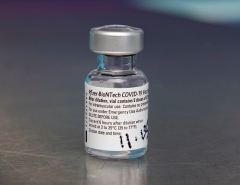 A vial of the Pfizer-BioNTech COVID-19 vaccine in a hospital in Sheffield, England. (Photo by Andy Stenning/Pool/AFP via Getty Images)

“President Donald Trump touted ‘America First’ again as he will sign an executive order on Tuesday affirming that Americans should receive coronavirus vaccines before any are distributed to other nations,” it said. “Are the lives of people in other countries not valuable? Where has Washington’s care for the human rights of other countries gone? Luckily, the development of vaccines in China has forged ahead, which brings hope to people in developing countries who also enjoy the right of virus prevention.”

A WHO expert advisory group has issued a framework document on the allocation and prioritization of COVID-19 vaccinations, which stresses the importance of equity in vaccine access globally, while also recognizing the responsibility of national governments to ensure their citizens’ wellbeing.

“Countries and territories have primary responsibility for protecting and promoting the well-being and human rights of those living within their borders,” it says. “It is thus reasonable and appropriate for countries to be concerned with securing sufficient COVID-19 vaccines to meet the needs of their own populations.”

“However, this national concern does not absolve nation-states of obligations to people in other countries,” the document says. “The global community also has an obligation to address the human rights claims to vaccines of people living in countries who cannot, without assistance, meet their needs by, for example, reducing obstacles to obtaining vaccines that confront countries with fewer resources and geopolitical power.”