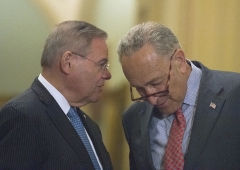 (CNSNews.com) – The United States on Sunday formally withdrew from the Open Skies Treaty after years of alleging Russian violations, prompting a senior Democratic senator to “urge the incoming Biden administration to rejoin.”

Since its entry into force in 2002, three U.S. administrations identified and reported on Russian breaches of the treaty, which aims to build trust between almost three dozen former Cold War foes via unarmed observation flights over each others’ territory. But President Trump – notwithstanding his critics’ claims of being soft on Russia – responded differently to his predecessors, in line with a stated determination to exit agreements no longer viewed as being in the U.S. interest.

Commenting on Sunday’s development, six months after notice was lodged with the depository states of Canada and Hungary, National Security Advisor Robert O’Brien highlighted that approach. Trump, he tweeted, “has never ceased to put America first by withdrawing us from outdated treaties and agreements that have benefited our adversaries at the expense of our national security.”

But the ranking Democrat on the Senate Foreign Relations Committee, Sen. Bob Menendez of New Jersey, said the withdrawal leaves the U.S. and allies “less secure against Russia.”

“I urge the incoming Biden administration to rejoin the treaty in a manner consistent with our constitutional structure, and I expect the new administration to consult early and often with the Senate Foreign Relations Committee on this and other treaty matters,” he said.

While campaigning for the White House, former Vice President Joe Biden fretted that the treaty may “crumble” should the U.S. leave.

“Withdrawal will exacerbate growing tensions between the West and Russia, and increase the risks of miscalculation and conflict,” he said in a statement that implied he would reenter the treaty if he became president.

Biden acknowledged the Russia violations, but said that they “should be addressed not by withdrawing from the treaty, but by seeking to resolve them through the treaty’s implementation and dispute mechanism.”

Still, the Obama-Biden administration struggled to do so. In its final annual Open Skies Treaty compliance report, released in the spring of 2016, it said, “Russia continues not to meet its treaty obligations to allow effective observation of its entire territory, raising serious compliance concerns.” It added that U.S. efforts to discuss the problems “have not resolved any of the compliance concerns.”

Breaches by Russia and some of its former Soviet allies were identified going all the way back to the very first such annual report, issued by the Bush administration in 2005.

Russia has used Tupolev-154 aircraft, among other models, for its Open Skies Treaty overflights. (Photo by stringer/AFP via Getty Images)

Over the years, Congress also worried about Russian violations, with hearings, resolutions, and amendments inserted into defense spending legislation. NATO, too, began calling on Moscow to return to full compliance in 2014.

“The treaty has become a critical component of Russia’s intelligence collection capability directed at the United States,” U.S. Strategic Command commander Adm. Cecil Haney, wrote in a letter to the then chairman of the House Armed Services subcommittee on strategic forces, Rep. Mike Rogers (R-Ala.). “The vulnerabilities exposed by exploitation of this data and costs of mitigation are increasingly difficult to characterize.”

In testimony before Rogers’ subcommittee that year, Defense Intelligence Agency director Lt. Gen. Vincent Stewart said, “The Open Skies construct was designed for a different era. I’m very concerned about how it’s applied today, and I’d love to talk about in a closed hearing.”

Afterwards, Rogers said, “The threat posed by Russia seems to be clear to everyone but the President [Obama]. When Russia is invading its neighbors and cheating on arms control treaties left-and-right, it is a mystery to me why the president would continue to let the Russian Federation put U.S. security at risk as he is doing with the Open Skies Treaty.”

At the outset the Trump administration also sought to resolve problems through the mechanisms provided, similarly without success.

U.S. Assistant Secretary for International Security and Nonproliferation Chris Force told reporters earlier this year that the Kremlin had essentially been saying, “You can fly anywhere you want and look at anything you like at any time – except for the things we don’t wish you to see.”

Ford charged that Russia had restricted Western flights over sensitive areas like Chechnya and Kaliningrad, and that it was trying to use the treaty to advance its territorial claims to Crimea and the breakaway Georgian regions of Abkhazia and South Ossetia.

Alluding to the possibility that NATO allies may pass on to the U.S. imagery obtained during Open Skies flights, Russia’s foreign ministry said it would “seek firm guarantees that the states remaining in the treaty will fulfil their obligations … to ensure that the photographs from reconnaissance flights are not transferred to third countries that are not signed up to the deal.”

In his statement Sunday, Menendez also complained that the administration was violating U.S. law, pointing to a provision in the 2020 National Defense Authorization Act (NDAA) requiring the administration to provide Congress with justification for any decision to withdraw from the Open Skies Treaty, four months before giving notice.

When Trump signed the NDAA into law in December 2019, however, he made clear his view on the matter.

Noting that the provision “purports to require congressional notification before providing Russia with a notice of intent to withdraw from the Open Skies Treaty,” he wrote in a signing statement, “I reiterate the longstanding understanding of the executive branch that these types of provisions encompass only actions for which such advance certification or notification is feasible and consistent with the president’s exclusive constitutional authorities as commander in chief and as the sole representative of the nation in foreign affairs.”