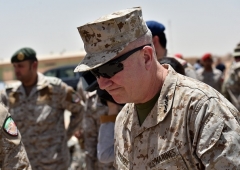 (CNSNews.com) – Amid questions about the Taliban’s willingness to cut ties with al-Qaeda – in line with an agreement signed with the U.S. earlier this year – U.S. Central Command commander Marine Gen. Kenneth McKenzie said this week he does not believe the conditions have been met for a full withdrawal of U.S. forces from Afghanistan by next spring.

While the Taliban has been acting against one terrorist group posing a threat to the U.S. – the local ISIS affiliate – “it is less clear to me that they will take the same action against al-Qaeda,” he said.

Speaking by video link to an event hosted by the Washington-based Middle East Institute, McKenzie said an initial drawdown called for in the February agreement is meanwhile on track, with troop numbers now down to around the “mid-8,000” mark.

Then, providing the Taliban complies with its commitments, those remaining troops, along with those of NATO allies, are meant to be withdrawn within a further 9.5 months, or roughly by the end of April next year.

A major condition for the U.S. is the Taliban severing its long-held links with al-Qaeda. That alliance lies at the root of the war: The fundamentalist movement that seized control of most of the country in the late 1990s sheltered Osama bin Laden’s terrorist group as it plotted to attack America on 9/11, and in the aftermath, sparking the late 2001 invasion.

Speaking by video link to an event hosted by the Washington-based Middle East Institute, McKenzie recalled that the U.S. had agreed to “go to zero” by May next year.

In parallel to the U.S.-Taliban agreement, efforts are underway to get a process of “intra-Afghan” talks underway. Progress has been reported, after early holdups, in the contentious area of prisoner releases.

As the Afghan government prepares for negotiations, McKenzie said, “I think the Taliban needs to demonstrate that they’re going to be faithful partners too.”

McKenzie said the threat posed to the United States from within Afghanistan was not the Taliban but the groups that the Taliban “allow to live in Afghanistan,” such as al-Qaeda and the Afghan affiliate of ISIS.

“We believe the Taliban actually are no friends of ISIS and work against them,” he said. “It is less clear to me that they will take the same action against al-Qaeda.”

“And only time will tell,” he added, saying the U.S. will know that by observing what the Taliban does, not what it says.

‘Have no place in Afghanistan’

The key terrorism-related portion of the U.S.-Taliban agreement states that “the Taliban will not allow any of its members, other individuals or groups, including al-Qaeda, to use the soil of Afghanistan to threaten the security of the United States and its allies.”

Specifically, the pact commits the Taliban to:

-- Prevent any group “from threatening the security of the United States and its allies,” prevent them “from recruiting, training, and fundraising,” and refrain from hosting them

--Deny asylum or residence in Afghanistan, or visas, passports, travel permits, or other legal documents, to individuals posing a threat to the security of the U.S. and its allies.

A recent U.N. Security Council monitoring report, citing intelligence from member-states, said that over the past year the Taliban “appear to have strengthened their relationship with al-Qaeda rather than the opposite.”

“Information provided to the monitoring team since its previous [annual] report has indicated that al-Qaeda is quietly gaining strength in Afghanistan while continuing to operate with the Taliban under their protection.”

The report also said the Taliban consulted al-Qaeda regularly during its negotiations with the U.S., assuring it “that it would honor their historical ties.”

McKenzie said al-Qaeda’s global home continues to be in eastern Afghanistan, near the frontier with Pakistan, and that its leader, Ayman al-Zawahiri, is believed still to be “physically up in that area somewhere.”