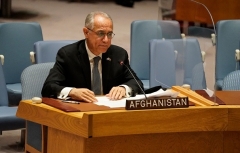 (CNSNews.com) – Afghanistan’s mission to the United Nations said on Monday it had decided not to deliver a scheduled address to the General Assembly after “consultation with a number of prominent members,” but reaffirmed that it would continue to occupy the country’s U.N. seat.

The move comes amid a dispute over who should represent Afghanistan at the world body – the ambassador appointed by the elected but ousted Ashraf Ghani government, or a representative named by the terrorist group that seized power last month but has yet to be formally recognized by any other government.

While Ambassador Ghulam Isaczai currently holds the seat, the Taliban last week named its former Doha-based spokesman, Suhail Shaheen, as the “Islamic Emirate of Afghanistan’s permanent representative to the U.N.”

A General Assembly “credentials committee” will consider the competing claims later this fall.

In the meantime, “Afghanistan” had been scheduled to address the General Assembly on Monday afternoon, just ahead of last-placed Timor-Leste on the speaker’s list on the final day of the annual high-level week.

By Monday morning, however, Afghanistan had been removed from the list.

It said further that the decision was taken “[f]or the sake of national interests, lofty and long-term interests and also for the sake of securing Afghanistan’s seat in the United Nations.”

“In consultation with a number of prominent members of this organization, we decided not to discuss Afghanistan at this General Assembly.”

It said the mission, and the permanent representative (Isaczai) would continue to hold the seat and “function as before.”

Stephane Dujarric, spokesperson for U.N. secretary-general Antonio Guterres, said in response to queries on Monday that the secretariat had not removed Afghanistan from the speaker’s list. Instead, the Afghanistan mission had over the weekend asked to be removed from the list.

Queries sent to Isaczai about the decision brought no response by press time.

Even though the U.N. has yet to decide on the Taliban’s claim for the Afghanistan seat, the terrorist group’s Suhail Shaheen is already calling himself the “IEA [Islamic Emirate of Afghanistan] Permanent Representative to UN.” (Screengrab: Twitter)

After the Taliban seized control of most of Afghanistan in 1996 the ambassador appointed by the previous government continued to occupy the country’s U.N. seat.

That was because the General Assembly credentials committee repeatedly deferred a decision on whether the Taliban regime or the ousted government of President Berhanuddin Rabbani should represent Afghanistan at the U.N.

In the end the issue resolved itself when U.S.-led forces in late 2001 toppled the Taliban regime.

Twenty years later the Taliban is back in power and demanding the U.N. seat. 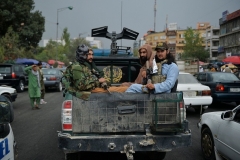 The Biden administration maintains there is widespread international support for tying any legitimization of the reinstalled Taliban regime to its behavior.

Secretary of State Antony Blinken has repeatedly pointed to a U.N. Security Council resolution passed on August 30, which called on the Taliban to ensure freedom of travel; to not allow Afghanistan to be used as a springboard for terror attacks against other countries; to allow humanitarian aid; to uphold human rights including women’s rights; and to establish an inclusive government.

On the last two points, at least, serious concerns have been raised, with governments and advocacy groups voicing alarm about reprisal killings, severe restrictions on women, and a threat to return to public executions and strict shari’a-justified punishments like stoning and limb amputation.

At a session of the U.N. Human Rights Council in Geneva on Monday, an Afghan diplomat – appointed, like Isaczai, under the ousted previous government – called on the body to appoint a monitoring mechanism.

“Since the fall of Kabul the situation of human rights has gravely deteriorated,” said Mohibullah Taib. “The Taliban’s promises to allow women and girls to fully exercise their rights, and to leave human rights defenders and journalists unharmed, have not been respected.”

Taib urged the HRC to adopt a resolution in the session now underway to establish “a dedicated and effective mechanism” to monitor the human rights situation in his country and ensure accountability.

During an NGO segment at the same meeting, U.N. Watch executive director Hillel Neuer criticized the HRC for its response to the crisis, drawing attention to a “special session” it held on the situation last month.

“Faced with compelling reports of Taliban atrocities including mass reprisal killings of Afghan civilians who worked for previous administrations, as well as the subjugation of women through gender apartheid, what has this council pronounced? What has it decided?” Neuer asked.

“Nothing. At a special session on Afghanistan that was just held, this council refused to convene any commission of inquiry, refused to condemn any Taliban abuses, refused to even mention the word ‘Taliban.’”

On the question of an “inclusive” government, meanwhile, the Taliban announced cabinet posts on September 7 and again on September 21. Out of a total of 50 individuals named, only six are from non-Pashtun minorities (three Tajiks, two Uzbeks and one Hazara). Pashtuns dominate the ranks of the Taliban but account for around 42 percent of Afghanistan’s population.

Even more glaring than the lack of ethnic diversity, there are no women among the announced government posts.

And as previously reported, the cabinet ranks include U.S.-wanted terrorists, men accused of mass killings of ethnic minorities, and at least 17 individuals on the U.N. Security Council consolidated list of sanctioned terrorists, subject to an assets freeze and travel ban.

Despite this, Taliban spokesman Zabihullah Mujahid said after the second round of cabinet posts was announced on September 21 that “all the requirement necessary for international recognition are met.”

“Now it is the job of the international community to cooperate with Afghans and recognize us through diplomatic channels.”

Pakistan Pushes For Taliban Recognition: ‘Their Behavior is Somewhat Different From the Past’ (Sept. 24, 2021)