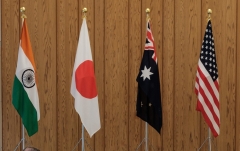 The national flags of India, Japan, Australia, and the United States fly at a Quad ministerial in Tokyo last October. (Photo by Nicolas Datiche/Pool/AFP via Getty Images)

(CNSNews.com) – President Biden later this week will take part in the first-ever meeting of the four leaders of the “Quad,” an Indo-Pacific security forum long viewed by China as an initiative designed to curb its regional ambitions.

Both the White House and State Department on Tuesday pointed to challenges other than China when discussing the Quad – the Quadrilateral Security Dialogue, comprising the United States, Japan, Australia, and India – including climate change, global health in the context of the coronavirus pandemic, and economic cooperation.

Price was responding to a reporter who had asked to what degree the adversarial relationship between the U.S. and China would feature at the meeting.

He did not refer directly to China, although he did concede that maritime security is one important common interest – an allusion to China’s approach to territorial and maritime disputes in the South and East China Seas.

“But our shared interests go well beyond that,” Price continued. “And I think you will see reflected in the agenda the breadth of those shared interests in the aftermath of the Quad meeting.”

The grouping of four major Indo-Pacific democracies was established during the George W. Bush administration, largely stagnated during the Obama years, until revitalized under Trump in 2017, with an explicit China focus. (“As partners in this Quad, it is more critical now than ever that we collaborate to protect our people and partners from the CCP’s exploitation, corruption, and coercion,” then-Secretary of State Mike Pompeo told his counterparts during a ministerial in Tokyo last October.)

The Biden administration has expressed enthusiasm about the grouping, which National Security Advisor Jake Sullivan in January called a “mechanism which we see as fundamental a foundation upon which to build substantial American policy in the Indo-Pacific region.”

She noted that while Quad foreign ministers had met over the years since it was formalized in 2007, “Friday will be the first time that the Quad is meeting at the leader level.”

“That President Biden has made this one of his earliest multilateral engagements speaks to the importance we place on close cooperation with our allies and partners in the Indo-Pacific.”

At the State Department, Price was asked why the Quad was considered so important that Biden was meeting with his counterparts within his first 50 days in office.

Price was asked whether the administration’s vision for the Quad included a political or military dimension.

“No,” he replied. “As I mentioned before, the Quad is a grouping with important friends and allies of the United States, and it’s a grouping that is predicated on shared interests.”

China, however, views the initiative differently.

Global Times, a Chinese Communist Party mouthpiece, reported that the Quad summit appeared to Chinese observers to be an attempt by the U.S. “to sound out its Asian partners’ attitude toward forming an ‘unbreakable alliance’ to counter China’s rise.”

Lu Xiang, a research fellow at the Chinese Academy of Social Sciences in Beijing, told the paper that while the U.S. wants to lead the Quad, each of the other members had their own “agendas.” He predicted that the grouping would ultimately resemble a talking shop more than a security alliance.

“China believes that true multilateralism means observing the purposes and principles of the U.N. Charter, upholding the U.N.-centered international system and promoting democracy in international relations,” he said. “It means openness and inclusiveness instead of closeness and exclusion.”