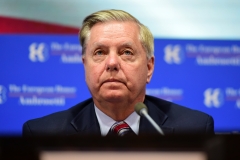 (CNSNews.com) - Despite his notable support for the U.S aiding Ukrainian war efforts, Senator Lindsey Graham (R-S.C.) disapproves of the Ukrainian government’s creation of a list of people they accuse of promoting Russian propaganda, including U.S. and European lawmakers, professors, intelligence analysts, and some journalists.

At the Capitol on July 27, CNSNews.com asked Senator Graham:

“Yeah, you know, I don’t like what some people say. but I’m not a big fan of Ukraine doing this,” replied Senator Graham.

“It’s a free country here, people can speak out anyway they like,” he said. “So, while I disagree with what some of the people say, I’m not into making a list.”

Ukraine’s Center for Countering Disinformation, which was established in 2021 under the National Security and Defense Council of Ukraine, recently put out a list entitled. “Speakers who promote narratives consonant with Russian propaganda.” The list includes 72 people, 28 of whom are US citizens.

Under each name there are two sections, one labeled “pro-Russian narratives,” under which it lists bullet points of what ideas each person allegedly promoted, and the other labeled “occupation,” which lists the job of each accused promoter.

Doug Bandow’s supposed promotion of Russian propaganda was his claim that the “USA and Europe provoked the Russian president,” and his call for an end to the sanctions being placed on Russia, insisting that the “Russian people are not to blame for the war.”

Tulsi Gabbard found herself on the list for tweeting about the potential danger of U.S.-funded biolabs in Ukraine.

Senator Paul’s opposition to Ukraine joining NATO is listed as an example of the Russian propaganda promoted by the Kentucky politician.

Military strategist Edward Luttwak was placed on the list for saying “referendums should be held in the Donetsk and Luhansk regions,” according to the Ukrainian document.

“While I have repeatedly said my sympathies lie with Ukraine, my loyalty is to the United States. My oath of office obligates me to defend the United States and that includes defending our country from incurring massive new debt no matter how worthy the cause,” Senator Paul told the Daily Caller when asked to comment on his placement on the list.

This past May, Senator Paul, along with 10 other GOP Senators, voted against sending $40 billion in military aid to Ukraine.

In a lengthy response given to UnHerd, journalist Glenn Greenwald called the list “McCarthyite idiocracy.”

“When I was a young boy, my mother taught me that when others can’t beat your arguments with facts or logic, they smear you. That is what is going on here,” John Mearsheimer also told UnHerd.

The list does not make clear any potential consequences these 72 individuals face for allegedly promoting Russian propaganda.

Polina Lysenko, head of the Center for Countering Disinformation, explained the purpose of the Center at  a 2021 meeting with foreign diplomats:

“The purpose of the Center is to emphasize the importance of protecting the information sphere for the national security of Ukraine, to counteract propaganda, destructive disinformation and campaigns, as well as to prevent manipulation of public opinion.”