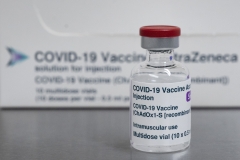 (CNS News) -- The Vatican recently issued a statement explaining that it is "morally acceptable" for a person to receive a COVID-19 vaccine that relied on the "cell lines from aborted fetuses" to produce.  But the Vatican stressed that vaccination "must be voluntary," not compulsory.

People who object to vaccines "produced with cell lines" from aborted babies must take other measures to protect themselves from becoming carrriers of the virus, said the Congregation for the Doctrine of the Faith, the Vatican office that clarifies and enforces the Church's moral teachings.

However, some Catholic bishops have stated it is immoral and not acceptable to use such vaccines because the recipient's "body is benefitting from the 'fruits' (although steps removed through a series of chemical processes) of one of mankind’s greatest crimes," abortion.

In its Dec. 17 "Note on the Morality of Using Some Anti-COVID-19 Vaccines," the Congregation wrote that it "has received several requests for guidance regarding the use of vaccines against the SARS-CoV-2 virus that causes Covid-19, which, in the course of research and production, employed cell lines drawn from tissue obtained from two abortions that occurred in the last century."

The Vatican office then explains its understanding of evil, such as procured abortion, and the differing degrees of cooperation in evil.

"The fundamental reason for considering the use of these vaccines morally licit is that the kind of cooperation in evil (passive material cooperation) in the procured abortion from which these cell lines originate is, on the part of those making use of the resulting vaccines" -- the person who receives the vaccination -- "remote."

"[A]ll vaccinations recognized as clinically safe and effective can be used in good conscience with the certain knowledge that the use of such vaccines does not constitute formal cooperation with the abortion from which the cells used in production of the vaccines derive," said the Congregation.

"It should be emphasized, however, that the morally licit use of these types of vaccines ... does not in itself constitute a legitimation, even indirect, of the practice of abortion, and necessarily assumes the opposition to this practice by those who make use of these vaccines," said the office.

"In fact, the licit use of such vaccines does not and should not in any way imply that there is a moral endorsement of the use of cell lines proceeding from aborted fetuses," added the office.

The Vatican also said that pharmaceutical companies and government health agencies have an obligation to produce "ethically acceptable vaccines that do not create problems of conscience."

As for whether people need to take the COVID vaccine, the office stated that "vaccination is not, as a rule, a moral obligation and that, therefore, it must be voluntary." However, the people who, "for reasons of conscience, refuse vaccines produced with cell lines from aborted fetuses, must do their utmost to avoid, by other prophylactic means and appropriate behavior, becoming vehicles for the transmission of the infectious agent."

The Congregation's "Note" was signed by Cardinal Luis F. Ladaria, who is the head of the Congregation for the Doctrine of the Faith, and by its secretary, Archbishop Giacomo Morandi. According to Vatican News, the Note was "explicitly approved by Pope Francis" on Dec. 17, 2020.

On Dec. 8, prior to the release of the Note, U.S. Bishop Joseph Strickland, head of the diocese of Tyler, Texas, issued a letter to his flock.

"Soon we will face the availability of vaccines which we hope will alleviate the painful consequences of COVID-19 and its spread," he wrote. "Along with other Christian leaders, I have stressed the importance of ensuring that vaccines respect the dignity of human life and do not use the remains of electively aborted children in any part of the process."

"As your shepherd, I cannot in good conscience receive a vaccine that has been produced using an aborted child," said the bishop. "There are ethical vaccines in development which are worth waiting for."

"I urge you to reject any vaccine that uses the remains of aborted children in research, testing, development, or production," he wrote.

On cardinal, two archbishops, and two bishops (including Strickland) released a report on Dec. 12 explaining why they object to the use of the COVID-19 vaccines that were produced using the call lines of aborted babies.

As published in LifeSiteNews.com, the clergymen state, "In the case of vaccines made from the cell lines of aborted human fetuses, we see a clear contradiction between the Catholic doctrine to categorically, and beyond the shadow of any doubt, reject abortion in all cases as a grave moral evil ... To argue that such vaccines can be morally licit if there is no alternative is in itself contradictory and cannot be acceptable for Catholics."

"The theological principle of material cooperation," state the clerics, "can hardly be applied to the case of vaccines made from fetal cell lines, because those who knowingly and voluntarily receive such vaccines enter into a kind of concatenation, albeit very remote, with the process of the abortion industry."

"The crime of abortion is so monstrous that any kind of concatenation with this crime, even a very remote one, is immoral and cannot be accepted under any circumstances by a Catholic once he has become fully aware of it," they wrote. "One who uses these vaccines must realize that his body is benefitting from the 'fruits' (although steps removed through a series of chemical processes) of one of mankind’s greatest crimes."