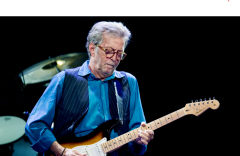 Music legends Van Morrison and Eric Clapton, the latter a three-time inductee to the Rock-and-Roll Hall of Fame, have joined forces to release a track, "Stand and Deliver," which is a protest song against government-imposed lockdowns set to allegedly combat COVID-19.

"Do you wanna be a free man/Do you want to be a slave? ... Is this a sovereign nation/Or just a fascist state?" read some of the lyrics in the song.

Money raised from this song (released on Dec. 4) and several similar pieces by Morrison will go to live-music artists suffering from the lockdowns, through the Lockdown Financial Hardship Fund. The Hardship Fund was established "to support musicians who are facing financial hardship as a result of the government restrictions on live music," according to vanmorrison.com.

"The restrictions currently imposed by the Northern Ireland Executive are needlessly crippling the livelihoods of everyone who is part of the live music eco-system," said Morrison.  "Venues have spent millions of pounds on the implementation of additional safety measures in order to operate in line with government guidance, only to now be shut down again."

As for "Stand and Deliver,"  Eric Clapton's "recording is fantastic and will clearly resonate with the many who share our frustrations,” said Morrison on Twitter.

Although Van Morrison and Eric Clapton are two of the most venerated musicians in the world, who helped shape the rock and blues music of the last 50 years, Variety's left-wing Editor-in-Chief Claudia Eller was quick to chastise them.

"Do they not know that this pandemic is far from over?" said Eller. "In what world are these two living?"

She continued, "Morrison and Clapton had the audacity to release 'Stand and Deliver,' a song that flies in the face of government orders aimed at stemming further spread of the deadly disease. ... These tone-deaf musical legends appear to be oblivious to the seriousness of this health crisis."

Some of the lyrics in "Stand and Deliver" read,

Constitution, what's it worth?

You know they gonna grind us down

'Till it really hurts

Is this a sovereign nation

Or just a fascist state?

You better look out, people

'Fore it gets too late

You wanna be your own driver

Or keep on floggin' the dead horse?

You wanna be your own driver

Or keep on floggin' the dead horse?

You wanna make it better

Or do you wanna make it worse?

In his song, "No More Lockdown," Van Morrison sings,

Sir Van Morrison, 75, very famous for his songs "Moondance" and "Brown-Eyed Girl," has seen 40 of his albums hit the Top 40 in the UK and 18 of his albums hit the Top 40 Albums in the United States. He has received two Grammy Awards over the years, the Americana Music Lifetime Achievement Award for Songwriting and was inducted into both the Rock and Roll Hall of Fame and the Songwriters Hall of Fame.

Eric Clapton, 75, is considered one of the greatest rock/blues guitarists in history. He has received 18 Grammy Awards and the Brit Award for Outstanding Contribution to Music. Clapton has sold more than 100 million albums over the years, making him one of the best-selling musicians of all times. He is a recovered alcoholic and drug addict who founded the Crossroads Centre to help substance abusers overcome their addictions.