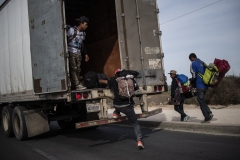 The soldier was further sentenced to 115 months in prison for illegally re-entering the United States.

For the ex-Mexican soldier, the U.S. attorney's office for the Western District of Texas said in a press release, "According to court documents, Juan Luis Mendoza-Iturralde, 39, a former Mexican soldier pleaded guilty to one count of transporting illegal aliens and one count of illegal re-entry into the U.S."

"On March 30, 2021, a Presidio County Sheriff’s Office deputy stopped Mendoza’s vehicle for a traffic violation," reads the statement.  "Inside the vehicle were 13 non-citizens.  Mendoza admitted he agreed to drive the group into the U.S. in exchange for $500 once he arrived at the group’s destination."

Mendoza "was sentenced this week to 115 months in federal prison for illegally re-entering the U.S. and to 60 months for transporting illegal aliens in the U.S." according to the Oct. 1 statement.

In the other case, 54-year-old Joseph Winslow, a resident of Fort Meade, Fla., was ordered on Sept. 10, 2021 to serve a six-year sentence, followed by three years of supervised release.

Winslow had pleaded guilty on March 5  to agreeing "to drive a tractor-trailer full of undocumented aliens from Laredo to San Antonio," according to the U.S. attorney's office for the Southern District of Texas.

"On Dec. 30, 2020, Winslow arrived at the Border Patrol (BP) checkpoint on Interstate Highway 35 approximately 29 miles north of Laredo," reads the press release. "Authorities conducted an X-ray of the trailer he was driving and discovered it was full of people."

"They ultimately identified a total of 149 undocumented aliens inside," stated the U.S. attorney's office. "Winslow agreed to transport the individuals in return for $10,000."