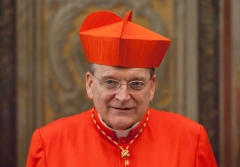 (CNS News) -- Citing Holy Scripture and the centuries-old teaching of the Catholic Church, Cardinal Raymond Burke, an American, said no Catholic is bound to support the recent statements by Pope Francis in support of gay civil unions and gay families.

Catholics are instead obligated to oppose such abominations, said Burke, because they are contrary to Church teaching and they are the private opinions of Francis as a man, not as the Supreme Pontiff.

Cardinal Burke, a member of the highest court at the Vatican, the Apostolic Signatura, is the former bishop of La Crosse, Wisc., and former archbishop of St. Louis, Mo.

On Oct. 21, it was revealed that in the new bio-pic about the Pope, Francesco, the pontiff says, "Homosexual people have a right to be in a family. They're children of God and have a right to a family. Nobody should be thrown out or be made miserable over it."

He then adds, "What we have to create is a civil union law. That way they are legally covered. I have defended this."

In an Oct. 22 statement on the Pope's remarks, Cardinal Burke said, "Such declarations generate great bewilderment and cause confusion and error among Catholic faithful, inasmuch as they are contrary to the teaching of Sacred Scripture and Sacred Tradition.... They cause wonderment and error regarding the Church’s teaching among people of good will, who sincerely wish to know what the Catholic Church teaches."

He then explains, "First of all, the context and the occasion of such declarations make them devoid of any magisterial weight. They are rightly interpreted as simple private opinions of the person who made them."

"These declarations do not bind, in any manner, the consciences of the faithful who are rather obliged to adhere with religious submission to what Sacred Scripture and Sacred Tradition, and the ordinary Magisterium of the Church teach on the matter in question," said Burke. (Emphasis added.)

To back up his point, Burke cited Scripture and Church teaching.

"1. Basing itself on Sacred Scripture, which presents homosexual acts as acts of grave depravity, Tradition has always declared that 'homosexual acts are intrinsically disordered'” (Catechism of the Catholic Church, no. 2357; Sacred Congregation for the Doctrine of the Faith, Persona humana, “Declaration on Certain Questions Concerning Sexual Ethics, no. VIII[1]), inasmuch as they are contrary to the natural law, closed to the gift of life and void of a true affective and sexual complementarity. Therefore, they cannot be approved.

"2. The particular and sometimes deep-seated tendencies of persons, men and women, in the homosexual condition, which are for them a trial, although they may not in themselves constitute a sin, represent nonetheless an objectively disordered inclination (Catechism of the Catholic Church, no. 2358; Congregation for the Doctrine of the Faith, Homosexualitatis problema, “Letter to the Bishops of the Catholic Church on the Pastoral Care of Homosexual Persons,” no. 3[2]). They are, therefore, to be received with respect, compassion and sensitivity, avoiding any unjust discrimination. The Catholic faith teaches the faithful to hate sin but to love the sinner.

"3. The faithful, and, in particular, Catholic politicians are held to oppose the legal recognition of homosexual unions (Congregation for the Doctrine of the Faith, Considerations Regarding Proposals To Give Legal Recognition to Unions between Homosexual Persons, Diverse questioni concernenti l’omosessualità, n. 10[3]).

"The right to form a family is not a private right to vindicate but must correspond to the plan of the Creator Who has willed the human being in sexual difference, “male and female He created them” (Gen 1, 27), thus calling man, male and female, to the transmission of life.

"'Because married couples ensure the succession of generations and are therefore eminently within the public interest, civil law grants them institutional recognition. Homosexual unions, on the other hand, do not need specific attention from the legal standpoint since they do not exercise this function for the common good.' (Ibidem, no. 9[4]).

"To speak of a homosexual union, in the same sense as the conjugal union of the married, is, in fact, profoundly misleading, because there can be no such union between persons of the same sex."

"It is a source of deepest sadness and pressing pastoral concern that the private opinions reported with so much emphasis by the press and attributed to Pope Francis do not correspond to the constant teaching of the Church, as it is expressed in Sacred Scripture and Sacred Tradition, and is guarded, protected and interpreted by the Magisterium," said Cardinal Burke.

"Equally sad and concerning is the turmoil, confusion, and error they cause among the Catholic faithful, as is the scandal they cause, in general," he said, "by giving the totally false impression that the Catholic Church has had a change of course, that is, has changed its perennial teaching regarding such fundamental and critical questions."