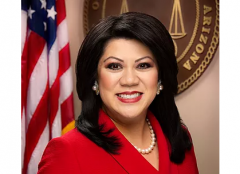 (CNS News) -- Because ice cream giant Ben & Jerry's decided to boycott Israel by ending sales of its product in the "Occupied Palestinian Territory," the Arizona Treasurer's Office is pulling all of its state funds from Ben & Jerry's parent company. It is against Arizona law for the state to invest in entities that boycott Israel.

Unilever PLC, a British multinational with more than 150,000 employees, is the parent company of Ben & Jerry's.

In a Sept. 7 press release, Arizona Treasurer Kimberly Yee said, “I gave Unilever PLC, the parent company of Ben & Jerry’s, an ultimatum: reverse the action of Ben & Jerry’s or divest itself of Ben & Jerry’s to come into compliance with Arizona law or face the consequences. They chose the latter.”

“It does not matter how much investment Unilever PLC has in Israel, with Ben & Jerry’s decision to no longer sell its product in the West Bank, the companies are in violation of the law in Arizona," said Yee.  "Arizona will not do business with companies that are attempting to undermine Israel’s economy and blatantly disregarding Arizona’s law.”

Yee explained that Arizona's investments in Unilever had been reduced from $143 million to $50 million, and that this would reach zero by Sept. 21, 2021.

In a Sept. 2 letter to Unilever's Investor Relations office, Yee wrote, "Ben & Jerry's is a legal subsidiary of Unilever and due to the decision by Ben & Jerry's, continues to be in violation of Arizona law. Therefore, our office has no choice but to place Unilever PLC on the list of firms that are participating in a boycott of the State of Israel until such time as Ben & Jerry's reverses its boycott decision or Unilever divests itself of Ben & Jerry's."

“Israel is and will continue to be a major trade partner of Arizona," said Yee in the press release. "As Arizona’s Chief Banking and Investment Officer, I stand with Israel, and I will not allow taxpayer dollars to go towards anti-Semitic, discriminatory efforts against Israel."

Although Ben & Jerry's claims it has a "long history of advocating for human rights, and economic and social justice," it has made no effort to boycott Communist China, which has killed 65 million of its own people for political reasons, and operates concentration camps.