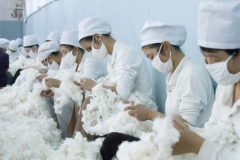 Berlin (CNSNews.com) – Western companies that have stopped purchasing Chinese cotton due to forced labor concerns in the Xinjiang region are being urged to resist intimidation from Beijing.

The Investor Alliance on Human Rights, backed by the New York-based Interfaith Center on Corporate Responsibility, said Tuesday it was engaging companies across various sectors including apparel, tech, food and beverage, and energy, to examine how business connections to the region could make brands complicit in human rights abuses.

The group cited documented claims that Chinese authorities have detained an estimated 1.8 million minority Muslims, including Uyghurs, in detention camps and prisons, and putting them to work in factories across China.

“In spite of these human rights abuses, the Uyghur region remains deeply connected to the global supply chains of hundreds of companies, including 20% of the world’s cotton and about 45% of the world’s supply of polysilicon,” it said, providing a list of companies including Swedish fashion brand H&M.

A number of major brands, including H&M, stopped purchasing cotton from China last year, in response to a decision by The Better Cotton Initiative – a global governance organization of which they are members – to revoke its licensing of Xinjiang-produced cotton.

The move came to light in China only recently, amid tensions over last week’s coordinated U.S., E.U., British and Canadian sanctions on Chinese officials over the treatment of Uyghurs. It was the first human rights-based sanction on China by the E.U. since the Tiananmen Square massacre in 1989.

It followed that up with sanctions against two U.S. officials, a Canadian lawmaker, and a Canadian parliamentary subcommittee.

Calls for boycotts against the Western brands began when the Communist Youth League targeted H&M, before spreading to other western companies as state media and local celebrities joined the bandwagon.

H&M responded, posting a new statement on Chinese platform Weibo, which said its supply chain policy “does not represent any political position.”

However, amid the furor, reports also surfaced that several companies, including H&M, may have removed statements relating to forced labor in Xinjiang from their webpages.

An Internet archive search shows that H&M’s Human Rights page previously included a link to “Update on Due Diligence,” which took users to a statement on Xinjiang.

As of late Tuesday, that link is no longer visible – although a search for “Xinjiang” on the company website finds that the statement in question can still be accessed. Regardless, some have viewed the removal of the link from the Human Rights page as a concession to China. 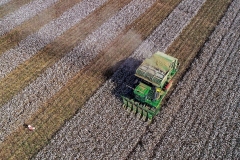 “We are now learning that several brands, including VF Corp. [parent to Timberland, and North Face] and Inditex [Zara’s parent company], have taken down policies against forced labor from their websites in fear of commercial retaliation from the Chinese government,” she said on Tuesday.

An archive search reveals that a page on the Inditex website referring to reports alleging “social and labour malpractice in Xinjiang” is no longer available.

Inditex has not yet responded to queries.

Dorett also raised concerns that the Hugo Boss brand had publicly doubled down on its intention to source cotton from Xinjiang.

The German fashion house was reported to have posted a statement on Weibo saying, “Xinjiang’s long-stapled cotton is one of the best in the world,” and “We will continue to purchase and support Xinjiang cotton.”

However, a Hugo Boss spokesperson said in response to queries that the offending post was “unauthorized” and had been deleted.

A new post on Hugo Boss’ Weibo page now links to a statement on Xinjiang, which says the company “has not procured any goods originating in the Xinjiang region from direct suppliers” and that “we want to ensure thatour products only contain cotton or other materials if they are in compliance with our values and standards.”

A U.N. Working Group on Business and Human Rights reported on Monday that more than 150 Chinese and foreign companies could be connected to “serious allegations of human rights abuses against Uyghur workers,” and called for China to provide access to the region for investigation.

“Many businesses are also implicated in these allegations, either directly or through their supply chains,” said the group’s vice chair, Surya Deva.

“Businesses must not turn a blind eye to this and must conduct meaningful human rights due diligence in line with the U.N. Guiding Principles to identify, prevent, mitigate and account for human rights abuses caused, contributed to or directly linked to their operations, products or services in Xinjiang and in other Chinese provinces,” Deva said.

Experts engaged by the U.N. working group said there were several long-standing requests to conduct official visits to China and encouraged the Chinese government to accept these requests.

Beijing denies claims of mass abuses in Xinjiang, saying its policies there are designed to combat extremism and lift millions our of poverty.