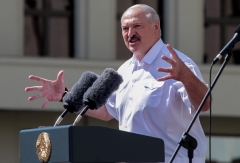 Berlin (CNSNews.com) – Amid frustration over the European Union’s failure to offer a unified response to repression in Belarus, Germany and France are pledging to support mediation efforts between embattled President Alexander Lukashenko and opposition figures.

The E.U. inaction in response to the crisis in its backyard has been made more conspicuous by the decisions of Britain and Canada to impose sanctions against the regime in Minsk.

German Chancellor Angela Merkel said Wednesday she would meet with exiled Belarusian opposition leader, Sviatlana Tsikhanouskaya, to support mediation efforts, and called on Lukashenko “to enter into a dialogue with his people, without interference from the East or the West.”

Also this week, French President Emmanuel Macron similarly pledged to help mediate in the crisis, after meeting with Tsikhanouskaya in Lithuania, telling reporters, “We do not recognize the election of Lukashenko and so we don’t recognize his status as president.”

The E.U. earlier rejected the outcome of August 9 elections, purportedly won by Lukashenko with more than 80 percent of the vote, and condemned the subsequent crackdown on mass protests.

On Tuesday, Canada and Britain announced sanctions on Lukashenko and seven senior officials in what British Foreign Secretary Dominic Raab called “Lukashenko’s violent and fraudulent regime.” (In early August, the U.S. imposed sanctions on four Belarusian companies, in a bid to pressure Lukashenko to release thousands arrested during the protests.)

The E.U.’s failure to impose sanctions is a result of a requirement of unanimity for such actions. Cyprus is blocking the move, in an attempt to persuade E.U. members to impose sanctions on Turkey in an unrelated dispute over oil exploration in the eastern Mediterranean. (Cyprus, Greece, and France are among E.U. members wanting to sanction Turkey; Italy, Spain and Malta and Germany are reluctant to do so.)

Cypriot Foreign Minister Nikos Christodoulides rejected the notion that Cyprus was wielding a “veto,” saying it wanted to see sanctions imposed in the two cases “in parallel.”

But a veto is exactly how some others in the E.U. view its stance.

Norbert Röttgen, a lawmaker in Merkel's Christian Democrats (CDU) who chairs the Bundestag's foreign affairs committee – and is one of three candidates running for the CDU leadership later this year – accused Cyprus of holding “the brave people of Belarus” as “hostage,” telling CNN Cyprus was “trying to blackmail the other 26 countries.”

In a tweet on Tuesday, Röttgen reiterated earlier calls for Germany to move ahead with its own sanctions against Belarus, rather than wait for E.U. unanimity.

Lukashenko has so far rejected calls for mediation, seeking support instead from his traditional ally in Moscow.

Earlier this month, he secured a $1.5 billion loan from Russian President Vladimir Putin, as well as a pledge of Russian police support if things turn violent.

Despite his willingness to intervene, Putin on Tuesday denounced “external pressure” on Belarus, saying the country was facing “conditions of unprecedented external pressure after the presidential elections.”

Putin earlier warned Macron that any foreign interference was “unacceptable.”

In an op-ed for Visegrad Insight, Quincy Cloet, a specialist in international politics, and Wojciech Przybylski, an expert in European politics, described Putin’s loan to Belarus as a “trap.”

They recalled a similar situation in Kyrgyzstan in 2010, where Russia offered a $2.15 billion loan but paid it only in part, before launching a campaign to replace the government with one more well-disposed towards Moscow.

Cengiz Aktar, a Turkish political scientist, said it was unlikely the E.U. would impose sanctions on Turkey over the spat with Cyprus and Greece, due to differing situations and relationships.

“Ultimately, for the E.U., Belarus’ misdoings target Belarusians, Turkey’s ones concern Cyprus and Greece, not Turkish citizens,” he said in an op-ed for Ahval. “Accordingly, sanctions are legitimate against Belarus, but unwelcome for Turkey.”