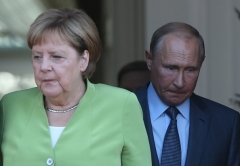 Berlin (CNSNews.com) – The Russian foreign ministry responded angrily on Wednesday to what it called a “massive disinformation campaign” aimed at mobilizing sanctions against the country over the poisoning of prominent Putin critic Alexei Navalny.

“The unconstructive approach by the German authorities is accompanied by groundless accusations against Russia,” it said. “The massive misinformation campaign that has been unleashed clearly demonstrates that the primary objective pursued by its masterminds is to mobilize support for sanctions.”

The ministry repeated Russia’s call for Germany to provide medical data relating to Navalny’s poisoning, complaining that up to now it “has not been willing to respond to our repeated requests in a prompt and constructive manner.”

Germany instead opted to hand over the test results to the Organization for the Prohibition of Chemical Weapons, a defense ministry confirmed on Wednesday, noting that Russia is a member of the OPCW.

Russia is facing a wave of criticism over the poisoning of Navalny, who fell gravely ill on a flight from Siberia to Moscow last month and was subsequently airlifted to a Berlin hospital.

Russian doctors who first treated him said they found no toxic substances, but a German medical laboratory said it found “proof without doubt” that he had been poisoned with a nerve agent from the Novichok group.

Navalny was taken out of an induced coma on Monday, with Berlin’s Charite hospital saying in a statement it was “too early to gauge the potential long-term effects of his severe poisoning.”

U.N. high commissioner for human rights Michelle Bachelet said it was “incumbent on the Russian authorities to fully investigate who was responsible for this crime – a very serious crime that was committed on Russian soil.”

The foreign ministers of the Group of 7 leading economies on Tuesday called on Moscow “to urgently and fully establish transparency on who is responsible for this abhorrent poisoning attack and, bearing in mind Russia’s commitments under the Chemical Weapons Convention, to bring the perpetrators to justice.” (Russia was suspended from the then-G8 after annexing Crimea in 2014.)

After the Novichok findings were announced, U.S. Deputy Secretary of State Stephen Biegun called in the Russian ambassador to express “grave concern” about the incident.

Biegun noted “that the use of this chemical weapon by Russia would be a clear violation of its obligations under the Chemical Weapons Convention,” the State Department said, adding that he pressed for Russia to cooperate fully in an international investigation.

In Congress, the chairman and ranking member of the House Foreign Affairs Committee Reps. Eliot Engel (D-N.Y.) and Michael McCaul (R-Texas) noted in a letter to President Trump that a Novichok agent had also been used in the attempted of former Russian spy Sergei Skripal in England in 2018.

“If the Russian government is once again determined to have used a chemical weapon against one of its own nationals, additional sanctions should be imposed.”

Shortly after Skripal was targeted by suspected Russian operatives, Trump expelled 60 Russian diplomats, all suspected spies, in solidarity with Britain, and imposed two rounds of sanctions against Moscow – which continues to deny any involvement in the affair.

In response to the Navalny case, Macron has bowed to critics and put a pending Franco-Russian council on security cooperation on hold.

German Chancellor Angela Merkel has also softened from her previous insistence on “decoupling” the Navalny case from the long-controversial Nord Stream 2 pipeline project between Russia and Germany, which is strongly opposed by the U.S. and some E.U. member-states.

After Foreign Minister Heiko Maas said in a Sunday newspaper interview “I hope that the Russians will not force us to change our position on Nord Stream 2,” Merkel’s spokesman said she endorsed his comment.

“The chancellor also believes that it’s wrong to rule anything out,” Steffen Seibert told reporters.

“I can’t express a clear, time-limited expectation [for Russia to agree to an investigation], except that we are certainly not talking about months or the end of the year,” he said.