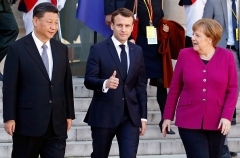 Berlin (CNSNews.com) – A little-noticed clause in a troubled China-European Union investment agreement, requiring senior executives of foreign non-governmental organizations (NGOs) to be Chinese, is causing a stir in Germany.

Lawmakers and non-profits have expressed concern over the clause, inserted into an annex of the Comprehensive Agreement on Investment (CAI). It states that “the senior executives of non-profit organizations which have been approved to be established within the territory of China shall be Chinese citizens.”

European lawmakers a week ago put the controversial CAI on hold over human rights concerns, but criticism over the NGO-related clause came after German media outlet Welt drew attention to it this week.

“The moment a Chinese citizen has to lead the work of German political foundations or business associations, for example, the Communist Party is in fact in charge of this work,” said Reinhard Bütikofer, a German Green politician and member of the European Parliament (MEP).

“It is a mystery to me how the German government and the European Commission will agree to such an agreement,” he told Welt.

Bütikofer is among a group of European individuals sanctioned by Beijing in March, after the E.U. joined the U.S. in imposing sanctions against Chinese officials for abuses against ethnic minorities in Xinjiang.

After seven years of negotiations over an investment agreement, the E.U. and China agreed on a deal in principle last December.

Spearheaded by Germany, China’s largest trading partner in the E.U., with support from France, the CAI is meant to provide companies on both sides stable conditions for trade and investments, and lift Chinese restrictions on European investors.

But the initiative ran into growing international concerns about human rights abuses, particularly relating to Xinjiang and a crackdown on democracy in Hong Kong.

Germany’s preference for cooperation with China due to its reliance on trade has put it at odds with the more critical U.S. approach towards Beijing.

There are signs of a shift in Germany, however. Elections scheduled for September could produce a coalition government including the Greens, whose leader Annalena Baerbock has called for a “joint, strong European position” toward China.

Leading German NGOs operating in China expressed concern about the clause in the CAI, but cautiously.

Heinrich Böll Foundation chair Barbara Unmuessig said she was “worried” about the clause, as the regulation would affect its work in China which already faces difficult restrictions.

The foundation, affiliated with the Greens, focuses on human rights and environmental issues.

It said exactly how the restriction would work in practice could not yet be assessed.

At the same time, the foundation expressed concern about the fact the NGO clause was made public so late in the process.

An Internet archive search confirms that the annexes were only made available on the European Commission website in mid-March, two months after the initial agreement was announced and published.

As it was agreed upon “in principle,” the CAI will still subject to legal review and ratification by the European Parliament. During that stage additions via annexes are expected, although any significant departure from expectations could impact the overall process.

Should the E.U. resume the process, the annex may become a point of debate among MEPs, many of whom are already critical of the agreement for putting trade ahead of human rights considerations, in their view.

After lawmakers put the CAI on hold last week Merkel defended the agreement, saying that “despite all the difficulties” it remained a “very important undertaking, because we are getting more reciprocity when it comes to market access.”

Reacting to reports on the NGO clause, the German foreign office said a legal review of the text was currently in progress to clarify ambiguities.

Although the clause only came to wider public attention in Germany recently it was the subject of analysis last month by Bertram Lang, a research associate at Goethe University in Frankfurt specializing in China’s non-profit sector and E.U.-China relations.

“If your investment is geared toward a public interest in supporting marginalized Chinese citizens, addressing climate change, or improving bilateral relations outside diplomatic channels,” he wrote, “you will face miles of red tape deployed by a deeply distrustful Chinese security apparatus, and you’ll invest without any expectation of support from your own government.”

“The simple – and sad – message conveyed to Europeans by this agreement is: If you want to invest money in China, you’d better do it for your own personal profit,” Lang said.

“Europe – and especially the German government, as the leading force behind the conclusion of this agreement – is ready to sacrifice much-touted values and principles when it comes to improving the ‘investment climate’ for carmakers or the chemical industry,” he said.