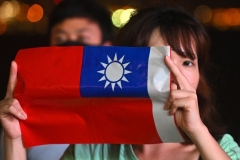 A woman holds a small Taiwanese national flag during a rally in Hong Kong last October. (Photo by Philip Fong/AFP via Getty Images)

Berlin (CNSNews.com) – Taiwan’s government has called on the German foreign ministry to explain why Taiwan’s flag does not appear on a page of national flags on the ministry’s website.

Below each country’s name on the page is an image of that country’s national flag. Under the name “Taiwan,” a blank space appears instead.

Taiwan’s flag is also missing on the click-through page, unlike the case when clicking through to other countries’ pages.

The Taiwan entry also carries an asterisk and footnote, reading, “The term ‘countries’ in the selection list includes states, provinces and territories. It does not reflect the federal government’s position on the status of a country or region.”

Taiwanese foreign ministry spokeswoman Joanne Ou said on Monday Germany has been asked to provide an explanation for the “unacceptable” situation.

“We express our hope that the German side can properly adjust the web design of the German federal foreign office in a more equitable and consistent manner to avoid discriminatory misunderstandings,” she said.

Germany, like most other countries, does not have formal diplomatic relations with Taiwan, in keeping with China’s expectation that the international community observe its “one China” policy.

China views Taiwan as a rebellious “province” and has threatened to use “non-peaceful means” to protect what it calls its national sovereignty, should Taiwan attempt to formally claim independence.

Asked during a press conference Friday whether Germany was raising “a white flag” to Beijing, foreign ministry deputy spokesman Rainer Breul said the decision not to display Taiwan’s flag was in line with the “one-China policy.”

“You know Taiwan’s special status, you know our position, our ‘one China’ policy,” Breul said. “We have no diplomatic relations with Taiwan, and Taiwan is not a country we recognize, so this is not surprising.”

Breul said Taiwan’s flag had in fact never been displayed on the website since those pages were set up in their current form in November 2017. (An archive search back to Nov. 22. 2017 shows this to be the case.)

“We decided on this form of presentation on the website,” he said. “A flag is a symbol of statehood.”

However, entries on the ministry website for Hong Kong, Macau, and the Palestinian territories do carry the flags of the three entities, despite the fact that none of the three is a sovereign state or recognized as such by Berlin.

Taiwan’s flag is missing, but the foreign ministry website does include flags of other non-sovereign entities, such as Hong Kong and the Palestinian territories. (Screengrabs: Foreign Ministry website)

Mareike Ohlberg, a senior fellow at the U.S. German Marshall Fund, warned that by not displaying Taiwan’s flag, the foreign ministry was signaling that it will accept whatever China dictates.

In a tweet she pointed out that a lack of diplomatic recognition cannot be given as a valid reason for the omission, since the Palestinian flag does appear.

Asked about the Palestinian flag, Breul said he would provide more information later, but has yet to do so.

Germany early this year unequivocally rejected calls to recognize Taiwan as a sovereign nation after a petition authored by a German citizen, supported by the Green party, acquired the 50,000 signatures necessary to bring it to parliament.

“A departure from the German one-China policy would seriously damage German-Chinese relations. And that is not in our interest,” a foreign ministry official said at the time.

Relations between China and the West have been increasingly delicate, strained over issues such as China’s treatment of its Uyghur Muslim minority, its handling of the coronavirus outbreak, and most recently, its crackdown on democracy protests and imposition of a national security law in Hong Kong.

The European Union and Germany have criticized the Hong Kong measures but have taken no punitive action as yet. E.U. foreign ministers were unable to agree on a response at a meeting on Monday.

E.U. foreign policy chief Josep Borrell said afterwards ministers had discussed extending the E.U.’s export ban on “sensitive technology” that could be used for suppressing protests to Hong Kong, but that further discussion was needed.

Some E.U. countries, such as Finland, favor measures such as suspending extradition treaties with Hong Kong. Others, notably Greece, Hungary and Italy – which want to participate in China’s Belt-and-Road Initiative infrastructure projects – have been quieter.

German Foreign Minister Heiko Maas said there must be “consequences” for China’s policies in Hong Kong, but Chancellor Angela Merkel has also warned against severing dialogue with Beijing.