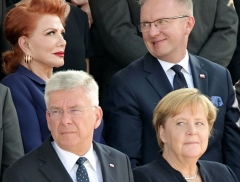 Berlin (CNSNews.com) – A suggestion by the U.S. Ambassador to Poland that nuclear arms deployed in Germany under a NATO nuclear-sharing arrangement could be moved there is making waves in both Germany and Russia.

A lawmaker in the center-left Social Democrats (SPD) party, Rolf Mützenich, prompted indignation last week when he called for the withdrawal of U.S. nuclear bombs from German soil. An air base in Rhineland-Palatinate state is reportedly host to some 20 U.S. B61 nuclear bombs, as part of a NATO agreement.

German officials reaffirmed commitment to the country’s NATO obligations, but amid the debate U.S. Ambassador to Poland Georgette Mosbacher suggested that the bombs could be moved to that country.

“If Germany wants to diminish nuclear capability and weaken NATO, perhaps Poland – which pays its fair share, understands the risks, and is on NATO's eastern flank – could house the capabilities here,” she tweeted.

Russian Foreign Ministry spokeswoman Maria Zakharova condemned the idea, calling it a direct violation of the NATO-Russia Founding Act, in which the alliance pledged not to place nuclear weapons on the territory of its new members in the east, which joined after the collapse of the Soviet Union.

“We do hope that Washington and Warsaw are aware of the dangerous nature of such statements, which can only aggravate the far from positive Russia-NATO relations,” Zakharova said on Tuesday, pointing too to the U.S. withdrawal from the Intermediate-Range Nuclear Forces (INF) treaty last August.

Another SDP lawmaker, Christoph Matschie, entered the debate, saying while his party advocates a world free of nuclear weapons, it also supports the concept of nuclear deterrence and participation in Germany.

In an op-ed for the Internationale Politik und Gesellschaft journal, Matschie argued that unilateral decisions about German participation could lead to uncertainty and trigger increased armament.

“Poland has long been striving for a stronger American presence. It is very conceivable that it will then apply for nuclear participation,” he said. “Should a U.S. administration give in to this wish, the NATO-Russia Founding Act would be history.”

For its part, “Russia would probably perceive such a deployment as an increased threat and would respond with further arms steps.”

Brookings Institution senior fellow Steven Pifer said relocating the bombs to Poland, closer to Russia, would be expensive – requiring the construction of special infrastructure – provocative, and would make them “vulnerable to Russian preemptive attack in a crisis or conflict.”

“Russia has deployed Iskandr-M ballistic missiles in Kaliningrad,” he wrote, in reference to the exclave of Russian territory that borders Poland. “With a range of up to 500 kilometers, these missiles could strike targets in almost all of Poland within a matter of minutes and with very little warning.”

Keith Ludwick, an associate professor of intelligence at the American Public University’s School of Security and Global Studies, drew attention to the use of social media as a medium for official policy and dialogue.

“It seems unlikely that the U.S. State Department would approve of such broad, sweeping policy announcements through a portal such as Twitter,” he said. “Russia acknowledging and commenting on a Twitter post regarding a critical diplomatic, military, and global security issue seems like an overreaction.”

However, Ludwich added that Russia simply ignoring Mosbacher’s tweet could create other problems such as the perception of “acceptance by silence.”

He said Germany’s internal struggles with anti-nuclear culture were somewhat counteracted by its need to be a strong NATO ally.

“As Russia continues to be a growing concern for the West, Germany must reconcile their struggles with the reality that Russian influence has the potential for becoming another Cold War,” he said.

Ryan McMaken, senior editor at the Mises Institute, said it has been unnecessary for decades for the U.S. to have nuclear weapons in Germany.

“A lack of warheads in Germany would hardly diminish the deterrent value of the U.S.’s enormous nuclear arsenal,” he said, “The only rationale is an ongoing claim that the U.S. can win a nuclear war if it has sufficient first-strike capability, and that this would be strengthened by the presence of nuclear arms in Germany.”

Given the realities of mutually-assured destruction, nobody would willingly put the theory to the test, he said.

Regarding the use of Twitter in the spat, McMaken noted that despite the unofficial nature of the tweet, if the situation was reversed the U.S. would also be compelled to respond.

“If a Russian ambassador publicly stated on Twitter that it would be a great idea to put nuclear missiles in Cuba, it is likely U.S. politicians would react with significant alarm.”