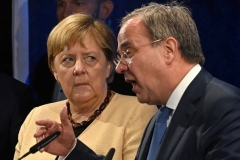 Provisional results released on Monday saw the SPD receive 25.7 percent of the vote (up from 20.5 percent in 2017), while the center-right CDU together with its Bavarian sister party, the Christian Social Union, scored a combined 24.1 percent (down from 33 percent in 2017).

Overall, the CDU-CSU shed almost 4.3 million voters since the last election, with the largest numbers shifting to the SPD (1,530,000) and to the Greens (920,000), according to the Friedrich Ebert Stiftung think tank.

The election was already significant in that it signals the end of Merkel’s 16 years chancellorship, but now also marks the lowest vote for the CDU in Germany’s post-war history. Only twice before did it come second, in 1972 and 1998, both times to the SPD.

The CDU and SPD have governed together in a “grand coalition” since 2013, but both parties’ leaders this time were quick to announce their interest in negotiating a coalition with smaller parties, with all eyes on the Greens and the pro-business Free Democrats (FDP), which garnered 14.8 and 11.5 percent of the vote respectively – up from 8.9 and 10.7 percent four years ago.

SPD leader and chancellor candidate Olaf Scholz said Sunday night he believed an SPD coalition with the Greens and FDP was feasible as the parties, despite coming from different positions, shared "a common idea of progress.”

“With enough pragmatism and a great willingness to cooperate, it will succeed," Scholz said.

Despite the CDU’s showing, party leader and chancellor candidate Armin Laschet pledged at a party meeting to “do everything possible to form a federal government under the leadership of the [CDU-CSU] Union.”

“Neither party can derive a clear government mandate from this result,” he said. Like Scholz, Laschet said he believed a CDU-CSU coalition with the Greens and FDP could be possible.

Bild quoted Merkel as saying a coalition deal would “have to be done very quickly,” and that the Greens and FDP “want to know very quickly” what the CDU has in mind.

The far-right Alternative for Germany (AfD), which rose to prominence last election on an anti-migration platform amid an influx of around one million migrants in 2015 received 10.3 percent of the vote (down from 12.6 percent in 2017). Both the CDU and SPD earlier ruled out working with the AfD.

After the last federal election the CDU first attempted to put together a CDU-Green-FDP coalition, but unfruitful negotiations dragged on almost six months. FDP head Christian Lindner eventually walked out, forcing the CDU to opt for a grand coalition with the SPD instead.

Past divisions remain. The FDP opposes tax increases while the Greens want to raise the top tax rate. The Greens, like the SPD, support an increase in minimum wage and further statutory labour protection while the FDP favors easing regulatory obligations on businesses.

Given Germany’s significance as Europe’s biggest economy, concerns of a repeat of 2017’s post-election limbo have been voiced beyond its borders.

“We hope that the coalition will be formed as soon as possible, for Germany but also for France,” the French government’s secretary of state for European affairs, Clement Beaune, told the German broadcaster ARD.

“We want to start many European initiatives – investments in industry and the climate – for this we need Germany and a stable government that is formed as quickly as possible,” he said.

“There is no time to be lost," he tweeted. “Europe needs a strong and reliable partner in Berlin so that work for a ‘social and green recovery’ can continue.”

“The FDP will tip the scales, which is great news for us,” Polish Ambassador to Germany Andrzej Pryzlebski said without elaborating. He added that the Greens’ critical stance towards Russia was in line with Polish foreign policy interests.

President Biden responded with apparent surprise when asked by a reporter on Sunday evening about the SPD taking the lead in the vote count.