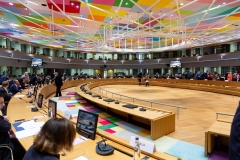 Berlin (CNSNews.com) – The European Union has resolved to protect its borders and increase security to prevent a recurrence of 2015’s mass migration crisis and address fears of a resurgence in terrorism following the Taliban’s takeover of Afghanistan.

“All efforts must be pursued to ensure that the Taliban regime ceases all ties and practices with international terrorism, and that Afghanistan does not become once again a sanctuary for terrorists and organized crime groups,” the bloc said on Tuesday following a meeting of interior ministers and the European Commission.

E.U. authorities such as Europol and the Frontex border force will analyze security risks and threats while exchanging information with third countries, including security checks on persons being evacuated from Afghanistan, it said.

The statement came shortly after the end of the U.S. and coalition evacuation mission from Kabul airport, during which more than 123,000 civilians of Afghan and other nationalities were extracted over a 17-day period.

The E.U. document expressed concern about migration, intent to avoid a repeat of the 2015/2016 crisis which saw more than a million people pour into Europe amid the Syrian civil war.

“The E.U. and its member states stand determined to act jointly to prevent the recurrence of uncontrolled large-scale illegal migration movements faced in the past,” it said.

The document did add evacuation efforts would continue for European citizens and Afghan nationals, although only with explicit mention of those who had helped E.U. members in Afghanistan.

The U.N. High Commissioner for Refugees predicted last week that up to 500,000 Afghans could be expected to flee Taliban rule by the end of the year.

Tuesday’s statement urged E.U. members to coordinate support, including financial assistance to third-countries – especially those neighboring Afghanistan such as Pakistan, Uzbekistan, and Tajikistan – to enable them to accommodate migrants there.

Ahead of the meeting, differences emerged over how the E.U. should coordinate migration policy.

Earlier, Ylva Johansson, the E.U. commissioner for migration, and German Interior Minister Horst Seehofer had both said it was too early to set numbers for possible migrant intakes.

Austrian Chancellor Sebastian Kurz said his country would not accept any new refugees at all, claiming it had already taken a “disproportionately large contribution.”

Austrian Foreign Minister Karl Nehammer rejected as “absurd” a call by European Commission head Ursula von der Leyen for the E.U. to offer safe legal routes for those in need of protection, such as women and children.

“The Geneva Refugee [Convention] does not provide that you can choose your own country of asylum, but actually get protection in the nearest country where protection is possible,” he said. “It cannot be countenanced that an Afghan refugee undertakes a journey of 5,000 kilometers in order to apply for asylum here in Austria.”

Ales Hojs, the interior minister of Slovenia – which holds the rotating E.U. presidency – also pressed for asylum seekers to be processed in neighboring countries.

“We are simply applying the ‘first safe country’ principle,” he said. “Asylum requests can still be made from there, without them having to come to the borders [of the E.U.]”

Luxembourg’s Foreign Minister Jean Asselborn criticized the positions taken by Austria and Slovenia, saying they amount to rejecting “direct human solidarity at this extremely dramatic moment for the tortured people in Afghanistan.”

On Tuesday, Seehofer defended Austria and Slovenia’s stance, pointing out that tiny Luxembourg does not face the same challenges as bigger E.U. members.

“Luxembourg is always represented with very small numbers in these matters and they should be a little more considerate of the interests of the main receiving countries,” Seehofer said. “We are not talking about a few hundred people here, but about many thousands who are already in Germany.”

“The E.U. and its member states must refrain from extremely damaging responses that put emphasis on keeping the E.U.’s border ‘protected’ and proposing or adopting measures that shift the responsibility for the protection of refugees to third countries,” Amnesty International said.

The group urged the E.U. to consider all Afghan women and girls as prima facie refugees, re-examine rejected asylum cases, and suspend all planned returned of Afghan nationals from Europe.

Julien Barnes-Dacey, director of the Middle East and North Africa program at the European Council on Foreign Relations, said the U.S. withdrawal from Afghanistan will bring new security implications for the E.U. and Middle East.

“There are still fears that Afghanistan could re-emerge as a haven for extremist groups such as al-Qaeda – with which the Taliban allegedly maintains ties – potentially helping them re-energize wider efforts in Iraq, Syria, and beyond,” he wrote.

“Europeans, for whom a stable Middle East is an absolute imperative given migration and terrorism challenges, will need to ask themselves how to proceed without the same degree of U.S. leadership,” Barnes-Dacey said.