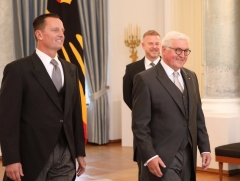 Grenell, whose three-month stint as President Trump’s acting Director of National Intelligence ended this week, has confirmed he will resign his ambassadorial post in the coming weeks.

In an interview with Handelsblatt on Tuesday, Grenell took on what has become a regular target of his during his two years in Berlin – the 764 mile pipeline project which, once operational, would see 55 billion cubic meters of Russian natural gas supplied directly to Germany annually.

“Germany has to stop feeding the beast while not paying enough for NATO,” Grenell said.

He cautioned that the election campaign in the U.S. would not prevent further sanctions legislation from moving ahead “quickly.”

A spokeswoman for German Economics Minister Peter Altmaier (CDU) criticized the timing of Grenell’s intervention, amid the global COVID-19 pandemic.

With the pandemic “putting enormous pressure on countries around the world,” she said, it was “not the time to threaten escalation with further extraterritorial sanctions, contrary to international law.”

It is unclear what form new U.S. sanctions could take, though Handelsblatt speculated that the U.S. may threaten companies that maintain the pipelines with trade fines, as well as imposing sanctions against the buyers of Russian gas.

The U.S. has long been trying to halt construction of the pipeline project, which Trump warned earlier would make Germany “captive to Russia.”

Some countries in eastern Europe share U.S. concerns that the project will only increase Europe’s energy reliance on Moscow, which has a history of using its energy resources as a lever during political disputes.

Those measures led to the withdrawal of Western companies and the project’s suspension, at 94 percent completion. Russian Gazprom officials have said that it would be capable of laying the pipeline alone.

During his tenure as ambassador, Grenell irked German lawmakers on multiple occasions with comments many regarded as interfering in German affairs.

Apart from Nord Stream 2, he challenged Germany in particular over its NATO defense spending and its economic relationship with Iran – both priorities for the Trump administration.

“For a generation, each and every U.S. Ambassador I got to know personally – career dipomat[sic] or political appointee alike – used to leave his post as a highly respected figure and trusted friend of Germany,” tweeted Andreas Nick, a lawmaker in Chancellor Angela Merkel's Christian Democratic (CDU) party. “Now someone leaves issuing threats as if he were representing a hostile power.”

Grenell responded to the criticism directly, on Twitter, “You always wanted me to stop asking you publicly to pay your NATO obligations and calling for an end to Nord Stream 2,” he said. “But these are U.S. policies. And I work for the American people.”

Nils Schmid, foreign policy spokesman for the center-left Social Democrats, said that to call Grenell’s departure a relief would be the wrong move.

“For me it is important that Germans and Americans work well together. This requires a political heavyweight in Berlin,” he told Tagesschau.

Alexander Graf Lambsdorff, foreign policy spokesman for the Liberal Democrats (FDP), said he regrets Grenell’s departure, because he considered him an “authentic” ambassador.

“It was not always easy, sometimes even difficult,” Lambsdorff said. "But as an ambassador, Grenell was someone with whom you could understand how the American government thinks and acts.”

Wolfgang Ischinger, head of the Munich Security Conference, fretted that Grenell’s withdrawal could see a return to the situation at the beginning of the Trump presidency, when the U.S. had no ambassador in Berlin for 15 months.