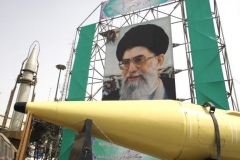 Berlin (CNSNews.com) – Foreign ministers from the parties to the Iran nuclear deal are keen for a Biden administration to return to the agreement next year, but before addressing calls for additional accords over the regime’s ballistic missile program or planned expansions to its nuclear programs.

At a virtual meeting on Monday, the ministers from Germany, France, Britain, Russia, China and Iran restated their commitment to the Joint Comprehensive Plan of Action (JCPOA), and agreed to “positively address” a possible U.S. return.

But they made no mention of calls for further agreements dealing with other concerns, especially the missile program. This is being seen as a tacit expression of support for Joe Biden’s declared stance, which is a readiness to return next year to the deal in its current form, while leaving issues like Iran’s ballistic missiles to be addressed in “follow-on” accords.

Iranian Foreign Minister Javad Zarif said Monday that any renegotiation of the accord was “out of [the] question,” underlining a position stated a week earlier by President Hassan Rouhani.

German Foreign Minister Heiko Maas warned Iran of a “last window of opportunity” to return to full implementation of the deal. Hitting back on Twitter, Zarif said that when the U.S. and the three European parties to the JCPOA – Germany, Britain and France – “perform their duties,” then Iran will reverse the “remedial” steps it has taken in recent years in response to the U.S. withdrawal.

(From May 2019 onward, the regime began taking steps away from JCPOA compliance, including exceeding the quantity of enriched uranium permitted under the deal as well as the level of enrichment allowed.)

The Obama-era deal, which offered Iran sanctions relief in exchange for curbs on its nuclear program, has essentially been on life-support since President Trump’s 2018 withdrawal and the reimposition of sanctions.

Reporting on Iran’s breaches since then, the International Atomic Energy Agency (IAEA) reports that the regime’s enriched uranium stockpile is now at more than 2.4 tons – 12 times the limit set by the deal (although below the eight tons it had in 2015) – and that it has been enriching uranium to 4.5 percent purity, above the deal’s 3.67 percent limit (but below the 20 percent level it reached prior to the deal.)

On Tuesday, British Ambassador to the U.N. Barbara Woodward expressed the hope that the U.S. would rejoin the JCPOA, but also voiced concern about Tehran’s recently announced plans to expand nuclear work, as well a resolution passed by Iran’s parliament calling on the regime to suspend all remaining implementation of the JCPOA if U.S. sanctions are not lifted by February 3.

IAEA director-general Rafael Grossi said in an earlier interview that too many breaches had occurred for the agreement to simply fall back into place.

“There is more [nuclear] material ... there is more activity, there are more centrifuges, and more are being announced,” he said. “I cannot imagine that they are going simply to say, ‘We are back to square one,’ because square one is no longer there.”

Giulio Terzi, a former Italian foreign minister said in an International Policy Digest op-ed that the E.U.’s focus on keeping the JCPOA alive should not come at the expense of addressing its ballistic missile testing and construction of nuclear facilities.

“While wishful thinkers might try one more time to try and appease the ayatollahs in the hopes of dissuading them from their three-decade-long drive to acquire nuclear weapons, the Biden administration and European powers should recognize the need to demand more of Iran,” he wrote.

Iran’s relations with the West have deteriorated since the U.S. withdrawal.

Last Thursday, the E.U. criticized Iran’s detention of dual-nationals such as journalists and academic on terrorism charges, and the executions of others, such as France-based dissident journalist Ruhollah Zam.

On Monday, the U.S. Navy in an unusual announcement reported the presence of a guided-missile nuclear submarine in the Persian Gulf region, where three nuclear-powered aircraft carriers are already present, making it the largest naval presence in the region in eight years.