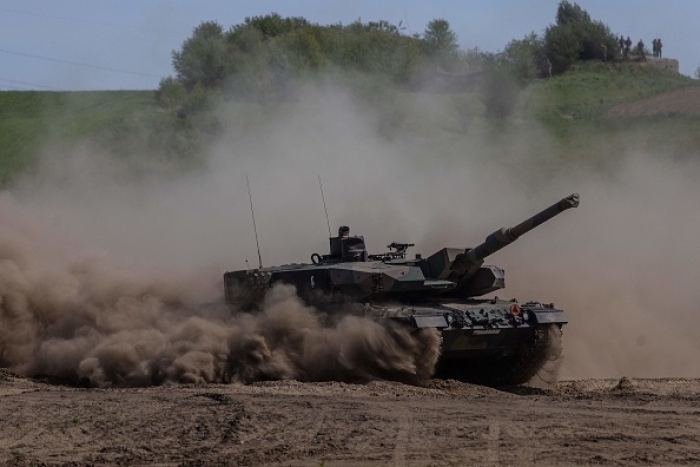 A German-built Leopard tank belonging the Polish armed forces takes part in a military exercise with U.S., French, and Swedish forces in Poland last May. (Photo by Wojtek Radwanski / AFP via Getty Images)

Berlin (CNSNews.com) – German Defense Minister Christine Lambrecht stepped down on Monday after days of speculation, creating uncertainty ahead of a key meeting to discuss the delivery of German-made battle tanks to Ukraine.

Lambrecht had been set to meet with U.S. Defense Secretary Gen. Lloyd Austin and E.U. defense ministers later this week, and was expected to provide a clear message to allies on the provision of Leopard 2 tanks to Ukraine.

Pressure on Germany to take a position has been mounting as other nations, including Britain, Poland, Finland, France, and the United States have pledged to deliver heavy weapons to Ukraine as it faces the brunt of the Russian invasion.

Over the weekend, a Russian missile strike on an apartment building in the city of Dnipro killed more than 30 people, a death toll that could climb further as many more are injured or missing.

Lambrecht’s resignation is not related to the question of the tanks, but rather came after a series of PR blunders that have prompted calls from lawmakers for her to stand down. Her replacement is expected to be announced on Tuesday.

For months, allies have been urging German Chancellor Olaf Scholz to authorize the export of Leopard 2 tanks to Ukraine, but he has remained non-committal, over concerns that the delivery of heavy weapons could spark direct conflict with Russia.

“Scholz must not hesitate any longer, but must get both Leopard 1 and Leopard 2 on the way [to Ukraine],” the defense policy spokesman for the conservative opposition Christian Social Union, Florian Hahn, told the Augsburger Allgemeine on Monday. “These delays are costing Ukraine time and lives.”

Britain announced on Saturday that it would supply the Ukrainian armed forces with 14 of its Challenger 2 tanks in “the coming weeks.”

Earlier this month, France said that it would send AMX-10 RC armored combat vehicles – deemed “light tanks” – to Ukraine in two months’ time. The U.S. has agreed to send 50 Bradley fighting vehicles in the coming months.

Poland and the Czech Republic have already sent some Soviet-era T-72 tanks to Ukraine, but the German tank is regarded as more modern and effective.

It is also used across Europe. According to estimates by the European Council on Foreign Relations, there are around 2,000 Leopard 2 tanks in 13 European countries.

Poland has declared itself ready to deliver 14 of its own German-made tank to Ukraine, and Finland has made a similar offer.

However, transferring German-made tanks to Ukraine will require the approval of Berlin, due to export restrictions.

German government spokeswoman Chistiane Hoffmann said the Polish government has so far made no such request. Delivering the tanks to Ukraine without Germany’s permission would be “illegal,” she said.

Polish Prime Minister Mateusz Morawiecki said on Monday he was sure Germany would approve the handover of the tanks in the coming talks.

“Ukraine needs modern, western tanks,” he said before traveling to Berlin a diplomatic visit that will include talks with lawmakers on the tanks for Ukraine issue.

“It is so important to stop acting in a dilatory way and to start offering true support, just like Poland, the U.S., and Great Britain have been doing,” Morawiecki added.

Meanwhile another factor emerged at the weekend, when the German manufacturers of the tanks says there is no possibility of Germany being able to send any of its tanks to Ukraine until 2024.

“Even if a decision to send our Leopard tanks to Kyiv were taken tomorrow, the delivery will take until the beginning of next year,” Rheinmetall CEO Armin Papperger told the Bild am Sonntag newspaper on Sunday.

“The vehicles are not just repainted, they have to be rebuilt for a wartime mission. They are completely taken apart and then rebuilt,” he said. Papperger also said the rebuilding process would cost “several hundred million euros.”

“German weapons, German tanks are essential for survival,” he told the German Press Agency. “We have very little time to discuss. And we expect our allies to understand this and act appropriately.”

Despite the government’s hesitant approach, some lawmakers have voiced support for delivery – from Germany or other countries which have Leopards in their inventories.

“Germany should not stand in the way when other countries decide to support Ukraine, regardless of what Germany decides,” Vice Chancellor Robert Habeck said Thursday, referring to Poland’s plans.

“Leopard 2 is the most commonly used battle tank in Europe,” Greens lawmaker Anton Hofreiter told news outlet t-online. “It is obvious we should approach our European partners and jointly put Leopard 2 at Ukraine’s disposal.”

Russia has not commented on the German tanks, but reacted dismissively to the British announcement.

“The sending of tanks will in no way hasten the end of military hostilities, but will only intensify them, causing new casualties," the Russian Embassy in London said in a statement. “But they will become legitimate large-scale targets for the Russian artillery.”