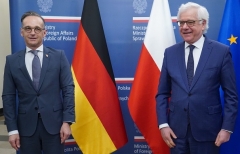 Berlin (CNSNews.com) – As European NATO allies ponder President Trump’s announcement on reducing the number of U.S. military personnel in Germany, Poland denied that an increase in U.S. troops in that country, agreed upon last year, was linked to the German drawdown.

German officials expressed firm opposition to Trump’s plan, arguing that it would harm the U.S. as well as European security.

Confirming earlier speculation and a recent Wall Street Journal report, Trump on Monday announced plans to reduce the number of U.S. troops stationed in Germany from about 34,000 to 25,000.

Both German and NATO officials indicated that Trump had not raised the matter directly with them before making the announcement.

“Neither the State Department nor the Pentagon has been able to provide any information about this,” Maas said during a visit to Poland, adding that any decisions impacting European security “definitely need to be talked about.”

Trump has not said where the troops to be withdrawn from Germany would go, although last year he and Polish President Andrzej Duda agreed that an additional 1,000 U.S. troops would be stationed in Poland.

The White House confirmed on Wednesday that Duda has accepted an invitation to visit Washington next Wednesday, adding to existing speculation that Trump may move troops from Germany to Poland, closer to Russia’s border.

“As close partners and NATO allies, the United States and Poland continue to expand our cooperation across a wide range of issues,” White House press secretary Kayleigh McEnany said, adding that the two presidents “will discuss further advancing our cooperation on defense, as well as trade, energy, and telecommunications security.”

Polish Foreign Minister Jacek Czaputowicz denied any link between boosting U.S. troops numbers in Poland with any withdrawal from Germany.

“I want to underline that these talks [about increasing troops in Poland] have no connection with the recent U.S. declarations and U.S.-German relations concerning the presence of, or reduction of, U.S. forces in Germany,” he said during a joint press conference with Maas on Tuesday.

“From our standpoint, U.S. forces in Germany also serve our security,” Czaputowicz said. “We would want that presence in Germany to be continued.”

For his part, NATO secretary-general Jens Stoltenberg reacted cautiously to Trump’s announcement, stressing the importance of the U.S. troop presence in Europe.

“What matters for me is that we maintain a significant presence of North America in Europe because that’s important both for Europe and North America,” he said.

Speaking ahead of a videoconference meeting of defense ministers taking place on Wednesday and Thursday, Stoltenberg said that a U.S. presence in Europe was not just about protecting Europe but projecting U.S. power beyond Europe.

“We know that many of the U.S. operations in Iraq, in Afghanistan, in Africa, they come out from bases – U.S. bases in Europe,” said Stoltenberg. He also pointed out that U.S. Africa Command is headquartered not in Africa, but in Stuttgart.

Stoltenberg said he first heard of the plan through media reports, rather than directly from Trump.

Trump linked the decision to unhappiness over Germany’s defense spending, which he has repeatedly criticized. At 1.38 percent it remains below a NATO target of two percent of gross domestic product (GDP), by 2024.

“So we’re protecting Germany and they’re delinquent. That doesn’t make sense,” he said on Monday. “Until they pay, we’re removing our soldiers.”

Asked during a White House briefing Wednesday whether Trump would reconsider if Germany did agree to increase its defense spending, McEnany said only, “I wouldn’t get ahead of the president on making that decision.”

German Defense Minister Annegret Kramp-Karrenbauer rejected a connection between troop deployment and her country’s defense budget, saying, “NATO is not a trade organization, and security is not a commodity.”

Aside from Poland, other allies on NATO’s eastern flank have expressed interest in hosting U.S. troops.

Lithuanian President Gitanas Nauseda said his country would also “be glad to host U.S. troops on a regular basis.”

“We expect that some of the troops that the United States plans to relocate from Germany will stay in Europe,” he told AFP.

But Kalev Stoicescu, a research fellow at the International Centre for Defense and Security in Estonia, warned against decisions which he said could undermine collective defense.

“While a larger American presence in Poland might appear to strengthen NATO’s eastern flank, the whole construction of collective defense would, in fact, be significantly weakened by the larger reduction of rapid reinforcement capability from Germany,” he said.

Stoicescu, a former Estonian foreign and defense ministry official, added that planned withdrawal, not first discussed with alliance members, could damage NATO’s political and military credibility, and warned that Russia would try to exploit any “potential new cracks in the alliance.”