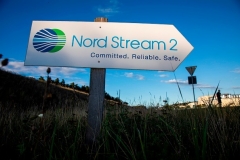 Berlin (CNSNews.com) – Germany continues to defend of its controversial Nord Stream 2 gas pipeline project with Russia amid allegations that its finance ministry offered a deal last year effectively to pay the U.S. to waive sanctions.

Meanwhile an attempt by Germany’s president to justify the project as a form of belated war repatriations to Russia went down badly in Ukraine, a country that stands to be significantly disadvantaged by the pipeline project which will double gas supplies from Russia to western Europe.

A letter leaked by an environmental lobbying group purportedly shows German Finance Minister Olaf Scholz offering the U.S. last summer a one billion euro ($1.2 billion) subsidy to build liquefied natural gas terminals on the German coast for U.S. natural gas in exchange for the U.S. lifting its opposition to Nord Stream 2, which currently is under U.S. sanctions.

As lawmakers protested about the alleged deal offer, a government spokeswoman, Ulrike Demmer, declined to comment on “confidential correspondence.”

Scholz and his ministry also refused to comment, although the leader of the parliamentary group of Scholz’ Social Democrat party, Carsten Schneide, supported the offer.

In another Nord Stream-related controversy, German President Frank-Walter Steinmeier in a weekend newspaper interview linked the pipeline deal with Russia to Nazi Germany’s invasion of the Soviet Union last century.

“More than 20 million people in the former Soviet Union fell victim to the war,” said Steinmeier. “That doesn't justify any misconduct in Russian politics today, but we mustn’t lose sight of the bigger picture. After the lasting deterioration in relations in recent years, energy relations are almost the last bridge between Russia and Europe,” he said.

Ukrainian Ambassador to Germany Andriy Melnyk condemned what he called “questionable historical arguments” being used to try to justify the pipeline project, saying Steinmeier’s remarks had prompted “surprise and indignation” in Kiev, and pointing out that millions of Ukrainians died at the hands of the Nazis too.

Ukraine fears that if Nord Stream 2 goes operational it may in time lose billions of dollars in vital transit fees now earned for Russian gas piped across its territory to markets further west.

“Using the war dead of the Soviet Union as an argument for Nord Stream 2 can hardly be surpassed in terms of cynicism, on many levels,” he said. “The fact that Steinmeier says this in an edited interview is actually a scandal.”

Steinmeier’s office dismissed the ambassador’s complaints, saying that “the text of the interview speaks for itself.”

Foreign Minister Heiko Maas said Wednesday Germany has not ruled out further European Union sanctions against Moscow over its treatment of Navalny, but that ceasing the pipeline and enomically isolating Russia would only push that country further into the arms of China.

“Anyone who fundamentally questions Nord Stream 2 can certainly have that opinion, but must also consider, at least geo-strategically, the consequences that it will have,” Maas told lawmakers during a debate.

Even before Navalny’s imprisonment, the E.U. had imposed entry and property bans on officials in President Vladimir Putin’s inner circle over the poisoning attempt.

“When it comes to economic interests, do politics and human rights no longer play a role?” he asked.

“Future relationships cannot be built on gas and oil,” he tweeted. “When it comes to economic cooperation, we should support the ecological modernization of Russia instead of continuing to feed Putin’s fossil fuel empire.”

Russia-Europe relations have become increasingly strained, with Germany, Poland and Sweden expelling Russian diplomats after Russia expelled theirs, accusing them of taking part in “illegal” protests against Navalny’s imprisonment.

Despite these tensions, Germany continues to defend Nord Stream 2 as a “purely commercial” project.

“Business relationships and business projects that have existed for decades are one thing, and serious human rights violations and our reactions to them are another,” Economy Minister Peter Altmaier told Bild am Sonntag on Sunday.

Former President Trump strongly opposed the project, saying it would make Germany a “prisoner of Russia.”  President Joe Biden has described it as a “bad deal for Europe.”