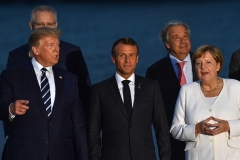 Berlin (CNSNews.com) – Germany on Wednesday became the latest member of the Group of Seven leading industrialized countries to reject a suggestion by President Trump that Russia be readmitted.

Foreign Minister Heiko Maas told reporters that he had “doubts about whether it makes sense” to allow Russia back into the G7, six years after it was suspended from what was then the G8.

Trump at the weekend called the G7 an “outdated” concept, proposing that it become a “G10 or G11 against G1” – a reference to China. In addition to Russia, he suggested that India, Australia and South Korea be invited to attend the group’s next summit.

In a Fox News Radio interview on Wednesday, he reiterated the suggestion, saying that inviting President Vladimir Putin to return was a matter of “common sense,” given that many of the topics discussed involve Russia.

“Have him in the room,” Trump said. “Get things done.”

The G7 brings together the U.S., Germany, Britain, France, Canada, Japan, and Italy. It meets annually to discuss a broad range of issues including global economy and security policy.

The U.S. currently holds the rotating presidency, and was to have hosted its summit at Camp David next week. Trump recently postponed it until at least September, due to the coronavirus pandemic.

In a move led by President Obama and backed by all other members, the G8 suspended Russia’s participation in 2014, in response to its intervention in Ukraine and annexation of the Crimea peninsula. The U.S., Canada, and the E.U. also imposed sanctions against Russia, which continues to occupy Crimea to this day.

Canada and Britain quickly rejected Trump’s suggestion that Russia now be invited to rejoin. The E.U., which is not formally a member but whose officials generally attend the summits, also criticized the idea.

“Russia was removed from the G7 group of nations following its annexation of Crimea and we are yet to see evidence of changed behavior which would justify its readmittance,” a spokesperson for British Prime Minister Boris Johnson said on Monday. “We wouldn’t support it being readmitted as a member of the group.”

Relations between Britain and Russia remain frosty over the attempted assassination by nerve agent of former Russian spy Sergei Skripal in 2018.

Canadian Prime Minister Justin Trudeau said Russia’s “continued disrespect and flaunting of international rules and norms is why it remains outside of the G7, and it will continue to remain out.”

French President Emmanuel Macron has said in the past that it would be “appropriate” for Russia to rejoin, although a presidential spokesperson in Paris said on Wednesday that now was not the time.

“Russia was excluded from the G7 for precise reasons. Today we do not think this situation has changed,” the official said. “But we must find ways to have a dialogue with Russia.”

Japanese Finance Minister Taro Aso said of the proposal, “Japan has not reached a stage where we can say it’s good or bad.”

The Italian government has not yet commented. It supported the idea of inviting Putin during an earlier call by Trump for Russia’s reinstatement

E.U.-Russia relations remain tense over Ukraine. E.U. foreign policy chief Josep Borrell said at a U.N. Security Council meeting last week that “the illegal annexation by Russia of the Crimean peninsula” had caused a “major disruption” in the relationship.

On Tuesday, Borrell said the G7 could not revert to the G8 until Russia “changes its course.”

He pointed out that while the U.S. as chair and host of the next summit is entitled to issue guest invitations, changing membership on a permanent basis “is not the prerogative of the G7 chair.”

Yuliia Popyk, a research assistant at the U.S. Institute of Peace said in an op-ed for the Atlantic Council that inviting Putin would send the wrong message, given Russia’s ongoing “aggression” against Ukraine.

“Welcoming an unrepentant Russia back to G7 would mean tacitly condoning Moscow’s hostile conduct,” she wrote. “At a time when the world’s leading democracies are looking to establish effective dialogue with an increasingly authoritarian and self-confident China, this is particularly relevant.”

For its part, Russia also rejected Trump’s proposal – particularly his suggestion of forming a G10 or G11 to confront China.

“The idea of an expanded G7 summit is in general a step in the right direction but doesn't really mean a true representation,” foreign ministry spokesperson Maria Zakharova said in a statement. “It’s obvious that it’s hardly possible to implement serious global initiatives without China.”

“We currently have an efficient, tried and tested format, G20, which includes G7, BRICS and other leading centers of economic growth and political influence of the entire world, not just one part of it,” she added.

(The five BRICS countries are Brazil, Russia, India, China and South Africa. Together they account for about 40 percent of the world’s population.)

Chinese foreign ministry spokesman Zhao Lijian, asked about Trump’s proposals, told reporters on Tuesday, “Seeking a clique targeting China is not a popular move, and it doesn’t serve the interests of countries concerned.”