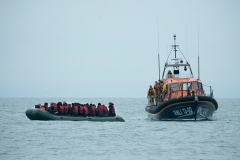 Berlin (CNSNews.com) – The British government appears to be edging closer to a deal with France on migration and border control after 27 people died attempting to cross the English Channel, an issue that has caused a serious rift between the two allies.

At the same time, Prime Minister Boris Johnson’s government is facing criticism at home over a bill proposing to turn back boats carrying illegal migrants at sea.

On Wednesday, British lawmakers welcomed a French announcement that it was sending a proposal on what Paris called a “balanced” deal.

The Daily Express quoted Conservative MP Michael Fabricant as saying it was “good news” that France had “backed down” over the issue.

French Interior Minister Gerald Darmanin said on Monday that Prime Minister Jean Castex would be sending a letter to Johnson proposing “a balanced agreement [on migration] between the United Kingdom and the European Union."

Darmanin also said the government would double staff numbers at its agency that combats people smuggling. France has asked the E.U. border agency, Frontex, to deploy an aircraft to fly over and monitor the Channel “day and night.”

Almost 26,000 migrants are estimated to have reached British shores this year after crossing the Channel on small boats, a sizeable increase from past years.

Last week Johnson made public a letter he had sent to French President Emmanuel Macron, proposing among other things that the two governments work on a policy of returning migrants who reach the U.K. to France.

Macron was unhappy that Johnson posted a copy of the letter on Twitter, and retaliated by disinviting Britain to E.U. talks about the migration issue held over the weekend.

France’s written proposals sent to Britain this week have not been made public.

Among the tetchy cross-Channel exchanges, Britain bristled when France’s Europe minister, Clément Beaune, charged that migrants sought to get into the U.K. because they were attracted by an economic model of “quasi-modern slavery” – one that did not require proof of a right-to-work.

Rejecting that claim, a Downing Street spokesperson said, “We have a strict regime and all those seeking to work in the U.K. must show documentary evidence of their right to do so before an employer can hire them.”

The spokesperson added that the government has “acknowledged that we do need to fix our broken asylum system, so that we can stop this parallel illegal route being exploited and break these criminal gangs who are exploiting vulnerable people.”

Meanwhile Johnson has forged a separate understanding with Belgian Prime Minister Alexander De Croo, with the two pledging to cooperate to “improve joint working on illegal [migrant] flows, including to disrupt human trafficking and human smuggling networks and prevent loss of life.”

Back at home, Johnson’s government is facing a backlash over proposed legislation that includes measures such as the turning back of boats carrying illegal migrants. It would also grant immunity from prosecution for Border Force officials who commit criminal offenses while pushing back boats.

Labour MP Harriet Harman, who chairs the Joint Committee on Human Rights, questioned the effectiveness of the bill, which was introduced in the House of Commons in July.

“Current failures in the immigration and asylum system cannot be remedied by harsher penalties and more dangerous enforcement action.” she said on Wednesday.

A report released by the committee said Britain has legal obligations under international law to save lives.

“Under international maritime law, both U.K. and French authorities should cooperate to safeguard lives within the Channel and within their respective search and rescue zones,” the report stated.

“Moreover, where such boats cross into U.K. territorial waters and the U.K. search and rescue zone, it then becomes the responsibility of the U.K. authorities to take all reasonable actions to protect the right to life of those on board.”

Dr. Peter Walsh, a researcher at the University of Oxford's Migration Observatory, said the legislation would not deter migrants since there was little evidence that they have knowledge of how asylum conditions varies between countries.

“If asylum-seekers are not aware of asylum policy, this suggests their decisions are unlikely to be much influenced by it,” he said.

Jean Asselborn, the foreign minister of Luxembourg, argued that the closing of other pathways for migrants to reach the U.K. had prompted them to try the dangerous Channel crossing.

“People want to go to Great Britain, but can no longer get into the trucks at the [Channel] tunnel,” he told Deutschlandfunk radio on Wednesday. “That’s why they only have the sea.”