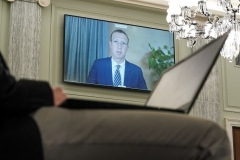 Berlin (CNSNews.com) –  As Election Day nears in the U.S., Facebook has announced it has taken down several dozen illegitimate accounts, including some linked to Iran, saying it had done so before they could build a “significant audience.”

The news came ahead of Wednesday’s appearance before the Senate Commerce Committee by Facebook CEO Mark Zuckerberg, Twitter CEO Jack Dorsey, and Google CEO Sundar Pichai, on the subject of whether an 1996 law that shields social media companies from liability for users’ posts should be amended.

Zuckerberg, who said he supports revising the law to allow an active role for government regulators, admitted that despite its best efforts Facebook continues to see at least some voter manipulation and interference in the 2020 elections.

He added, however, that Facebook has succeeded in intercepting and removing up to 250 million pieces of content, including almost 25 million relating to terrorism, in the first half of 2020.

Gleicher said in a statement the removed content had not attracted a “significant audience.”

He said the those behind the content were “trying to play on our collective expectation of widespread interference, to create the perception that they’re more impactful than they in fact are.”

“Rather than actually breaking into a sensitive voter database or using a large social influence campaign, you just play on everyone’s fear that it exists.”

Gleicher acknowledged that attempts would continue, both in the days ahead and after the election.

Last week, U.S. officials accused Iran of sending messages to thousands of Americans claiming the voting systems had been compromised.

Facebook has been under scrutiny over how political advertisements are used on its platforms, amid fears of a repeat of interference in the 2016 election.

It adopted strict new measures against content viewed as misleading, such as requiring advertisers to disclose affiliations and stopping accepting new political ads in the final week of voting – which began on Tuesday – as well as cracking down on what it calls “coordinated inauthentic behavior on behalf of a foreign entity.”

The increasing politicization of social media platforms has led to fears that the manipulation of the public by malicious actors could prompt instability. Last month, Zuckerberg said he felt there was danger of a “heightened risk of civil unrest in the period between voting and a result being called.”

“I think we need to be doing everything that we can to reduce the chances of violence or civil unrest in the wake of this election,” he told Axios.

The nonprofit Electronic Frontier Foundation has accused Facebook of hypocrisy for enforcing its own oversight and not allowing third-party research by New York University researchers to study the impact of political advertising.

Facebook executive Rob Leathern defended the move on the grounds that any third-party “data scraping” of Facebook’s content would be a federal offence under the Computer Fraud and Abuse Act.

“Violating the company’s terms of service to perform a constitutionally-protected watchdog role is lawful,” it argued. “There is no privacy benefit to users in prohibiting them from choosing to share the political ads they are served with researchers and journalists.”

The U.S. government has also been critical of Facebook’s approach. Despite its efforts, the Senate Judiciary Committee voted last Thursday to summon Zuckerberg and Twitter’s Dorsey over allegations of bias in decisions on what Facebook content to block and what to allow.

Tho Bishop, social media director at the nonprofit Mises Institute think tank, warned that Facebook’s approach, while possibly successful at limiting the influence of foreign governments, has also made it more difficult for Americans to utilize their marketing tools.

“It’s very easy to see how this paternalistic need to protect voters from ‘bad information’ can, and has been, abused in the current hyper-partisan environment,” he said. “Facebook and other platforms have used this behavior to justify a variety of different purges and ad restrictions.”

“If they genuinely believed in the people being capable of making their own political decisions, they would trust voters to engage with politically significant content,” he said.

Zuckerberg told senators on Wednesday the article was restricted after Facebook received warnings from law enforcement authorities to be on high alert that if “a trove of documents” appeared, it might be part of a foreign manipulation attempt.