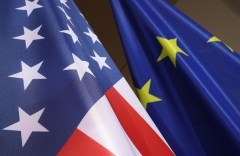 The U.S. and European Union flags on display in Germany. (Photo by Sean Gallup/Getty Images)

Berlin (CNSNews.com) – Polling in western Europe indicates strong dislike for President Trump compared to his Democratic rival, but some argue that the divide between U.S. and European Union policy could continue to grow regardless of the administration in Washington.

Data aggregated from recent polls in 13 western European countries by Europe Elects found that an average of 71 percent of respondents favor Joe Biden compared to just 14.5 percent preferring Trump. (Of note, countries in eastern Europe where U.S. policies tend to be viewed more favorably are not included.)

A recent Pew research poll meanwhile found U.S. favorability ratings in European at their lowest in decades – 41 percent in Britain, 31 percent in France, and 26 percent in Germany.

Relations between the U.S. and the E.U. have been strained over numerous issues.

Trump is a vocal critic of European allies – particularly Germany – falling short on their NATO defense spending commitments. The alliance reported Wednesday that only 10 of 30 members are on track to achieve the target of spending two percent of national gross domestic product (GDP) on defense this year. The ten are the U.S., Greece, Britain, Romania, Estonia, Latvia, Poland, Lithuania, France and Norway.

NATO secretary-general Jens Stoltenberg announced last December that by the end of 2020, NATO’s European members plus Canada will have invested $130 billion more on defense than they were in 2016, attributing the progress to pressure from Trump.

Trump strongly opposes the German-Russian gas pipeline project, Nord Stream 2 – as do many in the E.U., especially in the east. He was criticized by German lawmakers after ordering the withdrawal of U.S. troops from Germany, re-allocating some to Poland, which signed an agreement on deeper defense cooperation last month.

E.U. governments were also frustrated by Trump’s withdrawal from the Paris climate accord and the Iran nuclear deal, and attempts to reinstate U.N. sanctions against the regime in Tehran.

But London-based think tank Chatham House in a report last week argued that while those moves by Trump “antagonized its closest allies, especially in Europe,” the transatlantic relationship was already in a kind of “structural crisis” before he was elected.

“Atlanticists seem to imagine that until Trump became president, the U.S. had been consistently supportive of the European project,” it said. In fact, “the U.S. has gradually become less unequivocal in its support for what became the E.U.”

The report said that regardless of administration, China will continue to be a major point of division, along with Nord Stream 2.

“Europe will be faced with difficult choices – whoever is president,” it said.

Marjorie Chorlins, senior vice president for European affairs at the U.S. Chamber of Commerce, told the market intelligence company S&P Global that economic differences were unlikely to improve, whatever the election outcome.

“I do think it highly unlikely that the U.S. and E.U. would undertake a free trade agreement negotiation anytime soon, regardless of administration,” she said. “No [free trade agreement] negotiations are currently underway, and the Biden team has not indicated that this would be on their priority list.”

Andrew Small, an associate senior policy fellow at the European Council of Foreign Relations, said while views of the U.S. have been affected by longer-term factors, those are generally outweighed by the incumbent.

“Generally speaking, a president that seems to see Europe as a partner and shares some of the main European priorities, is likely to bring about a polling turnaround judging by precedent,” he said. “The opposite holds true where those views are clearly and openly at odds. That's been the case on almost every major issue with the Trump administration.”

“Poland and a couple of other Central and Eastern European countries have been treated more favorably by this administration,” he said. “The combination of that with a stronger strand of conservative opinion there and the heightened sense of need for U.S. defence commitments tends to make them lean a bit more Republican-friendly.”

Even in that region, however, positive sentiment has been tinged with concerns about Trump’s approach to Russia and NATO, he said.

Director of the U.S. German Marshall Fund’s Berlin office, Thomas Kleine-Brockhoff, attributed the negative polling to a combination of Trump’s policies and his manner.

“People feel attacked, hectored to and looked down upon by Trump,” Kleine-Brockhoff said. “His ‘America, First’ ethno-nationalism will naturally be seen as a threat, not a promise by many who are not Americans, and certainly by those Europeans who have multilateralism in their DNA.”