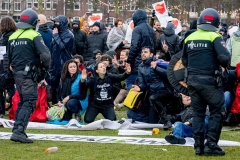 Berlin (CNSNews.com) – Three days of often violent protests in the Netherlands have raised concerns that unrest could spread to other countries, as a result of renewed lockdowns in response to coronavirus variants.

French and Belgian politicians fretted Wednesday that the protests against anti-COVID-19 measures in the Netherlands could spark resistance in their countries, as their governments mull the imposition of stricter measures.

Belgian Interior Minister Annelies Verlinden called for an increased police presence across cities in her country.

“The violent demonstrations that degenerated in the Netherlands have apparently incited certain people to call, also in our country, for demonstrations against the health measures,”  she told Belgian broadcaster RTBF. “It’s better to be proactive. We’ve read the messages on social media networks, we have to avoid that happening here.”

In France, former Interior Minister Christopher Castaner warned that the introduction of another national lockdown in France could also lead to “civil disobedience.”

“From a health point of view, if everyone could stay at home, that would be great,” he said. “But from a political point of view, we’re on slippery ground.”

Protests in the Netherlands turned violent on Saturday, beginning with the burning of a COVID-19 testing center and the looting of stores. Dutch Prime Minister Mark Rutte condemned what he called “criminal violence.”

“I understand very well that many people in the Netherlands, myself included, find the corona measures tough,” Rutte said on Wednesday. “I even understand that some do not agree with them, but that can never be a reason for this kind of behavior.”

The Netherlands has in fact seen a declining rate of new COVID-19 cases, a dip of eight percent over the past week. But a curfew was added to existing lockdown rules to stem the spread of the virus variant that first emerged in the U.K., according to the government website.

Belgium and France are both experiencing an increase in cases, with an eight percent and ten percent increase over the past week respectively. Both expressed concern over new virus variants, which are considered more transmissible.

Belgium on Monday announced a ban on all “non-essential” travel from January 27 until March, while French government spokesperson Gabriel Attal said Wednesday it was considering a “very tight” lockdown, as a nighttime curfew beginning at 6 PM was not "sufficiently" stemming the spread.

Denmark and Spain also saw smaller protests over the weekend, with five people arrested in Copenhagen. A crowd of 1,000 protesters gathered in Madrid, calling for an end to lockdowns.

A market research survey published Wednesday by the Society for Consumer Research found 54 percent of Germans were “moderately” or “very” concerned about their personal financial future, the highest level recorded since the start of the pandemic.

A German group calling itself Querdenken (“lateral thinking”), and believed to include some on the far-right, has been actively protesting lockdown measures, attracting around 40,000 people to a protest in August. This week the group resumed protests in the city of Stuttgart, where it originally emerged.

Christian Hoebe, professor of infectious disease control at Maastricht University in the Netherlands, said that increased infectiousness of the variant that emerged in the U.K. – R1.3 versus R0.89 – could trigger a “third wave” if not preemptively stemmed through tighter measures.

“We recommend continued or even stricter lockdowns to decrease the number of cases as much as possible in the time window before these variants become dominant,” he said.

Hoebe, a member of the Dutch national outbreak management team, said that the recent protests were unlikely to harm current efforts to curb the virus, adding that there is a visible difference between peaceful protests based on criticism towards policies, and criminal behavior on the street, which he said has no “real connection to COVID-19 policy, except for maybe boredom.”

“We have to consider the fact that only a small group was involved in these protests. The majority of the Dutch still endorse the policy,” he said. “Although nobody likes it, for most it’s clear this is needed.”