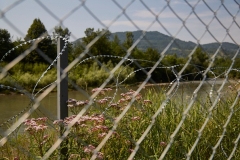 A security fence along the Ukraine-Romania border. (Photo by Pierre Crom/Getty Images)

Berlin (CNSNews.com) – European countries are bracing for a possible wave of refugees amid a heightened prospect of war in Ukraine, following the Kremlin’s recognition of the so-called “people’s republics” of Donetsk and Luhansk.

European Union Interior Commissioner Ylva Johansson said during a visit to Poland on Tuesday the E.U. must be “well-prepared” to take in fleeing Ukrainians.

“We have to be prepared if there will be a massive inflow of refugees of Ukrainians into the European Union,” she said.

Johansson spoke of the E.U.’s asylum agency needing to process asylum applications, the E.U. border agency Frontex having to handle registration and border management, while the support of the policing agency Europol would also be needed.

Earlier this week, Johansson said countries neighboring Ukraine were expected to be the hardest hit, but that countries such as Germany, Italy, and France should be prepared to help as well.

German politicians have called on their federal government to be prepared.

“The European Union will provide shelter and protection to people fleeing a war in Ukraine. That is our common obligation,” Michael Stübgen, the interior minister for the state of Brandenburg, said on Tuesday.

“I therefore expect the federal government to provide a regularly updated picture of the situation from now on and to coordinate immediately with the federal states which preparations need to be made,” the T-Online news portal quoted him as saying.

The federal state of Berlin has set up a crisis management team for a Ukrainian refugee influx. Its draft plan predicts that a war could see an estimated 1.7 million people leave their homes, with almost one million seeking shelter in the E.U. while the rest flee to other parts of Ukraine or to Russia.

Of those fleeing into the E.U., the plan envisages around one-third of the refugees (325,000) being accommodated in Poland, while the remaining 650,000 are distributed to other member-states, with Germany taking in around 260,000.

The federal government has yet to announce a formal plan.

“Since the number of refugees seeking asylum in Germany depends on numerous volatile factors, it is not possible to make a meaningful assessment of the future development of the number of asylum seekers,” said a spokeswoman for the Federal Office for Migration and Refugees.

Federal Interior Minister Nancy Faeser said on Monday Germany would probably have to take in refugees but would first focus on providing support and humanitarian aid to Ukraine’s neighbors.

Others in Germany are using the crisis to push for progress in the quest for a common E.U. asylum policy, which has been hampered for years by stances taken by some members of the Visegrad group – Poland, Hungary, the Czech Republic and Slovakia..

“A fair distribution of the refugees arriving in the E.U. failed primarily because of the Eastern European Visegrad states,” said Bundestag parliamentary secretary Stephan Thomae.

“Now, with the Ukraine crisis, Poland sees how important a common European distribution would be,” he said.

During the 2015-16 crisis, which saw more than a million Syrian refugees fleeing the civil war, E.U. “front line” states were heavily burdened by regulations stating that new arrivals must be sheltered in the country they first enter.

The bloc was unable to agree on a plan for “distributing” migrants among the members, however, due to objections from eastern states, particularly Hungary and Poland.

“Now is the opportunity to forge the coalition of the willing to achieve an equitable [refugee] distribution mechanism,” Thomae said.

Ukraine lies adjacent to four E.U. member-states, sharing long borders with Poland and Romania, and shorter ones with Slovakia and Hungary.

Despite past reluctance, neighbors are expressing a willingness to take in refugees, with Romanian Defense Minister Vasile Dincu saying the country was preparing for as many as half a million.

Poland indicated earlier that the “main wave” would go to Poland and Romania, and that Poland alone could see up to a million refugees arrive.

Slovakian Defense Minister Jaroslav Nad said earlier this year tens of thousands of refugees could cross into Slovakia and that plans had been drawn up.

Hungarian Defense Minister Tibor Benko said troops have been mobilized along the border with Ukraine and would need to be prepared for the possible arrival of refugees.